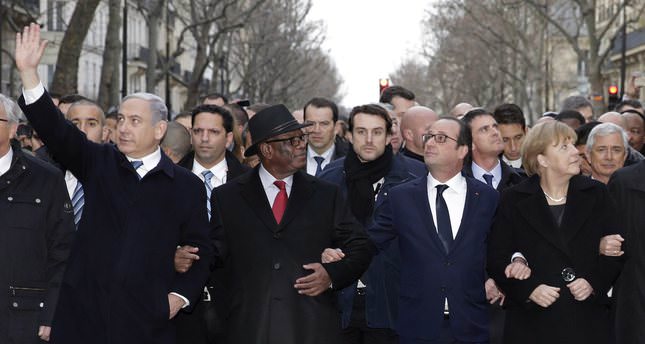 The U.S. and Israel strictly oppose Palestine’s drive for statehood and ICC bid, while the EU, especially France, supports both. Both Israel and the U.S. were chided for their attendance or lack thereof, respectively, at the anti-terrorism rally in Paris on Sunday

Riyad Mansour, the Palestinian permanent observer at the U.N., submitted the official application to join the International Criminal Court (ICC) to U.N. Secretary-General Ban Ki-moon in December. Israel and the U.S. opposed the application. Previously, both Israel and the U.S. opposed the recognition of Palestinian statehood. However, EU countries disagreed with them and have declared that they do not oppose the ICC bid or the statehood issue.

European parliaments including those in Spain, France and the U.K. have taken a first step to recognizing Palestine as an independent and sovereign state. Moreover, Ban said two weeks ago, that the state of Palestine will join the ICC on April 1. In a statement posted on the U.N.'s treaty website, Ban announced his acceptance of the documents: "The statute will enter into force for the State of Palestine on April 1, 2015," in accordance with the court's procedures. He said he was "acting in his capacity as depository" for the documents of ratification.

By joining the ICC, Palestine aims to bring human rights violations and war crimes committed by Israeli troops to the court, since Israeli actions remain unpunished despite many reports by the U.N. and independent non-governmental organizations that have shown that Israel committed war crimes several times.

The U.N. confirmed receipt of the documents and said the next steps were being reviewed. It will take a minimum of 60 days for the request to come into effect. Israeli leaders on Sunday threatened to take tougher action against Palestinians over their decision to join the ICC, a day after freezing the transfer of more than $125 million in tax funds.

In a first punitive response, Israeli Prime Minister Benjamin Netanyahu decided, in consultation with senior ministers, to withhold the next monthly transfer of tax revenue, totaling some 500 million shekels, an Israeli official said on Saturday. Palestinians have said that they intend on using their new membership in the Hague-based tribunal to press war crimes charges against Israel. "The Palestinian Authority has chosen confrontation with Israel and we will not sit idly by," Netanyahu told his cabinet.

If the application is accepted, an investigation into the 50-days of Israeli attacks on Gaza last summer could possibly be launched. A report released by Amnesty International in November accused the Israeli military of committing war crimes in Gaza during attacks on the Gaza Strip this past summer that left more than 2,100 Palestinians dead, including many civilians.

The group investigated eight cases and said in the report: "In the eight cases documented by Amnesty International in this report, Israeli aircraft dropped aerial bombs on or launched missiles at homes they knew or should have known had civilians inside. The attacks resulted in the deaths of at least 111 individuals, including at least 104 civilians, and injured many others. Some 34 apartments and neighboring houses, home to more than 150 people, were destroyed or badly damaged in these attacks."

Moreover, the report said: "According to the Rome Statute of the International Criminal Court, intentionally directing attacks against the civilian population as such, or against individual civilians not taking direct part in hostilities, and intentionally directing attacks against civilian objects constitute war crimes. In addition, regarding the destruction of entire homes, including apartment buildings, the 1949 Fourth Geneva Convention regulates Israel's actions as the occupying power in the Gaza Strip."

Further chastising Israel as Gaza's occupying force, the report cited Article 53 of the Fourth Geneva Convention that "any destruction by the Occupying Power of real or personal property belonging individually or collectively to private persons, to the State, to other public authorities or to social or cooperative organizations is prohibited, except where such destruction is rendered absolutely necessary by military operations."

The report also cited international humanitarian law, which "also prohibits disproportionate attacks, [which are those that] may be expected to cause incidental loss of civilian life, injury to civilians, damage to civilian objects or a combination thereof, which would be excessive in relation to the concrete and direct military advantage anticipated. Intentionally launching an indiscriminate attack resulting in death or injury to civilians or a disproportionate attack constitutes a war crime."

Another report released by the Geneva-based Euromid Observer for Human Rights in October said that Palestinian civilians were subjected by the Israeli army to "inhumane and abusive treatment such as beating, humiliation and exposure to the hot sun while naked for long periods of time."

The report entitled, "Israeli Matrix of Control: Use of Palestinian Civilians as Human Shields," said that the use of humans as shields is a repeated Israeli policy in the occupied Palestinian territories, citing similar cases reported in the West Bank based on testimonies collected by observers. "The use of human shields is a form of cruel and inhumane treatment and constitutes a flagrant violation of international humanitarian law and a war crime according to the Rome Statute of the International Criminal Court," the report said. The human rights organization urged the Fact Finding Committee of the Gaza Conflict established by the U.N. Human Rights Council to put "pressure on all parties found to be guilty of war crimes committed by the Israeli army."

"On the Palestinian ICC bid, President Obama reiterated the United States' position that the Palestinian Authority does not yet constitute a state, and is therefore not eligible to accede to the Rome Statute," the White House said in a statement on the conversation. "President Obama underscored that the United States does not believe Palestinian accession to the ICC is a constructive way forward. The United States continues to strongly oppose actions by both parties that undermine trust and encourages both sides to seek ways to deescalate tensions," the statement added.

In certain circles, it was claimed that French-Israeli relations were not having their best days as French President François Hollande asked Netanyahu not attend the anti-terrorism march, with the concern that the focus could diverge to Israeli-Palestinian relations. It was also claimed that the U.S. had low-level officials attend the solidarity rally as a response to France's policies toward Israel.

However, the White House acknowledged Monday it should have sent a senior official to the massive rally against terrorism in Paris, as Obama came under fire for failing to travel to France. "We should have sent someone with a higher profile to be there," White House spokesman Josh Earnest said. Washington was represented at the event by the U.S. ambassador to France, Jane Hartley.

"In a situation like this, they have a pretty significant impact on the other citizens who are trying to participate in a large public event like this." Secretary of State John Kerry said he would travel to Paris after wrapping up his tour of South Asia. Adding to the dismay among some American pundits and lawmakers, U.S. Attorney General Eric Holder had been in Paris for a meeting on terrorism, but he did not join the rally.

The White House announced that on February 18, there will be an anti-terrorism summit that will probably focus on the Paris attacks. However, it remains a question, that if Israel attends the summit and focuses on Hamas and other internal issues, how the EU and especially Turkey, which strictly opposes Israeli policies on Palestine and the Gaza Strip and harshly criticized Netanyahu's attending the anti-terrorism rally in Paris, will react. It is yet to be seen whether the U.S.'s unconditional support for Israel will cause trouble in its relations with not only Muslim countries, but also EU countries including France.