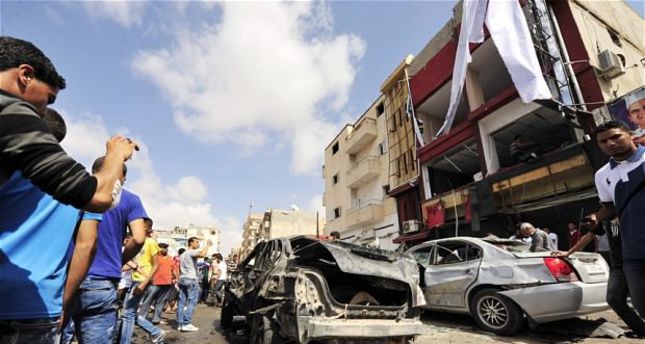 by Yusuf Selman İnanç Jan 15, 2015 12:00 am
The United Nations hosted crunch talks between Libya's warring faction in Geneva amind warnings that could be the last chance to prevent Libya from becoming another Syria. The talks were overseen by U.N. envoy to Libya and the U.N. chief's special representative Bernardino Leon. The talks were expected to be held last month. Yet, the U.N. postponed the talks since the rival factions refused to participate at that time.

Libya has been dragged into an inextricable situation as violence continues unabated, resulting in the deaths of hundreds of people during the fighting in Benghazi between rival militia camps Misrata and Zintan in the last months.

Over the past six months, various militia factions have coalesced into two rival camps claiming authority over the country, posing a significant threat to Libya's political stability while undermining the government's legitimacy. Amid political instability and chaos, violence-stricken Libya has been run by two governments. One is based in the eastern city of Tobruk and backed by the House of Representatives. The other based in the capital city, Tripoli, has held legitimacy over ministries, backed by the General National Congress (GNC), the legislative authority of the country. The two governments have associated themselves with a coalition of militia forces.

Benghazi and Tripoli have suffered from the escalating violence over the last two weeks due to increasing clashes between rogue brigades fighting for control of Tripoli International Airport, which led to an all-out battle for control of the entire capital. The two main armed militias, Zintanis and Misratans, have been fighting to seize control of key installations, especially the international airport.

The airport, which has been controlled by Zintani brigades, is of crucial importance because it enables militia groups to easily access the center of Tripoli, which means greater control over the capital city. During the heavy fighting around the airport, hundreds of people were reportedly killed and wounded. As the country has been descending into political chaos, many Western countries' foreign missions have announced the closure of their embassies and urged their citizens to immediately leave Libya.

Libya has suffered from a chronic absence of security as various actors have emerged. The powerlessness of the central government has led many people to take up arms against the government. State security forces have also failed to protect the government, leaving the country unprotected and open to heavy clashes between rival militias trying to gain authority over the government and the country. Peace and political stability seems far off as no rival militias have been strong enough to put an end to the ongoing war.

Among the major militia groups, Ansar al-Sharia is a Salafist militia, formed by Mohamed al-Zahawi, who fought in Afghanistan for years, emerged in June 2012. They demand the establishment of a state ruled by Sharia in the eastern city of Benghazi. The have been fighting with Libyan army brigades and forces loyal to Haftar for months.

The central government, in a state of continued turmoil, has long been at the mercy of militias that hope to integrate and build a national army against the interim government. After Moammar Gadhafi's ouster, the army has disintegrated, and the central government has gradually lost its power without having much effect on the ongoing violent clashes between armed forces loyal to Haftar and militia groups that serve as part of Libya's regular army in the eastern city of Benghazi. As many militant groups have taken up arms against the fragile central government, the government has decided to hold an early election in June to replace the interim government through democratic methods. However, the problem is that there are no-well established political groups to play a role in holding democratic elections amid the rising unrest.

Apart from the instability and insecurity, the humanitarian situation also has worsened in the country as oil revenue has dramatically decreased that resulted in the collapse of social services. Antoine Grand, head of the Red Cross Libya delegation, said that although basic public services were still functional across Libya, the opening of new front lines could have "heavy humanitarian consequences."

Hospitals are suffering from a shortage of medical supplies and the flight of foreign workers, there is frequent fuel, power and water shortages, food prices have risen and people have problems withdrawing money from banks, he said.

"With the fall of oil prices and oil production, and the political power struggle over national resources, the state might soon not be able to pay salaries, subsidies and running costs for hospitals, water and electricity companies," Grand told Reuters news agency by email from Tunis.

Ghassan Khalil, the United Nations children's fund (UNICEF) special representative in Libya, said that children were suffering from disruption to their school attendance and experiencing stress because of the conflict. He hoped that a new round of U.N.-backed negotiations to try to end the conflict, which had been scheduled for this week, would enable children to return to normal life.

Country director of Danish Refugee Council in Libya Martin Vane said that civilians across Libya face violence, damage to their property, kidnapping and increased rates of crime. Vane said many unexploded mines, bombs and shells had been reported throughout conflict-hit cities.

Several organizations, including Medecins Sans Frontières, the International Medical Corps and UNICEF, said they were operating in Libya from neighboring countries with the help of national staff and local NGOs, because of safety concerns, but planned to return to the country as soon as possible.