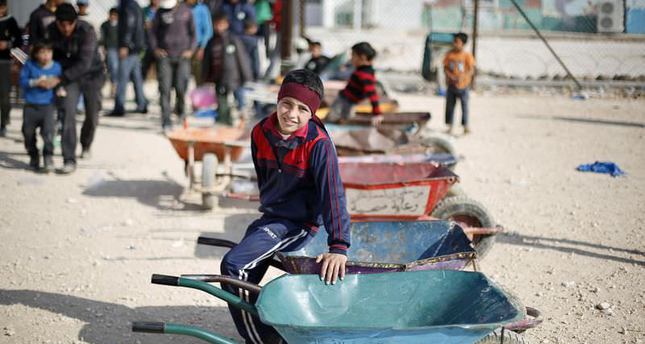 by Anadolu Agency Jan 15, 2015 12:00 am
The Turkish Cooperation and Coordination Agency (TIKA) on Thursday distributed urgent food aid to some 1,100 Turkmen refugee families who have fled the conflict in Syria to Lebanon.

"The food aid - which was distributed in the Kouachra and Wadi Khaled districts in the north and the Beqaa region in the east - is not the first of its kind and will not be the last," activist Khedq Abbas, who took part in the distribution process, told The Anadolu Agency.

"Turkmen families coming from Syria are in constant need of aid," he added.

The beneficiaries, for their part, expressed appreciation for the Turkish assistance.

"I pray for Turkey's welfare after it supported us in our crisis," Shams Akkash, who is in her 60s, told AA.

"We are in dire need of assistance. The situation is tragic for us; we only have God and Turkey to rely on," she added.

"We only pray that the Syrian crisis will come to an end soon so that we can all go home," he said.

Syria, which shares a border with Lebanon, has been in the throes of civil war since mid-2011, when a peaceful uprising against President Bashar al-Assad escalated into an armed insurrection following a violent government crackdown.

In the more than three years since, some 1.2 million Syrians-including thousands of Turkmen-have sought refuge in Lebanon, according to the UN refugee agency.
Last Update: Jan 16, 2015 9:27 am
RELATED TOPICS