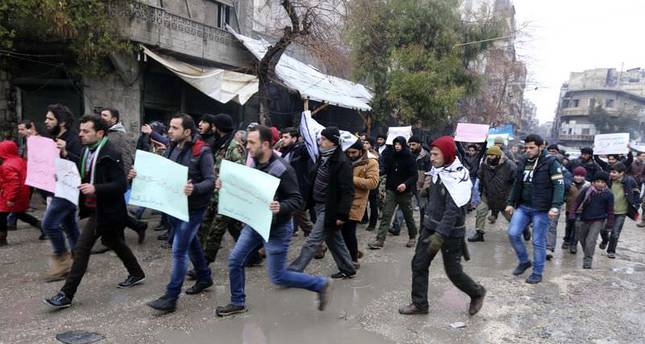 by Anadolu Agency Jan 16, 2015 12:00 am
The Syrian regime's airstrikes killed at least 10 people on Friday in Idlib's northern countryside.

The causalities took place in the towns of Armanaz and Kafr Takharim, an Anadolu Agency correspondent on the ground reports. The protesters, who marched after Friday prayers for the Prophet Muhammad and to condemn Charlie Hebdo's cartoons of him, were attacked by Assad's forces.

Ten people were killed in Armanaz town and seven people wounded in Kafr Takharim. Civil volunteers dug up the bodies of victims from collapsed buildings and provided medical aid to the injured.

The regime's air forces also attempted to attack anti-Charlie protests in the nearby town of Salqin. The opposition's air defenses managed to repel the attack.

The Syrian regime's airstrikes have recently intensified against civilians in Idlib province which is controlled by opposition forces.