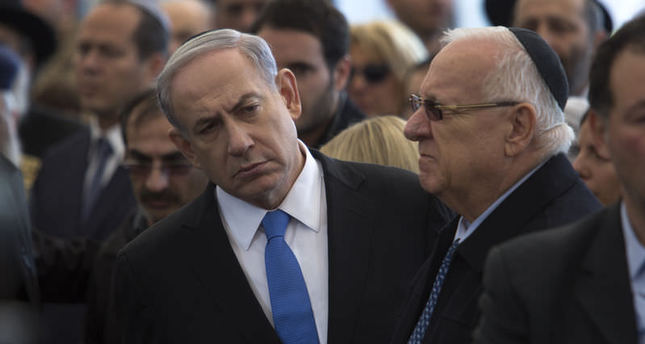 by Anadolu Agency Jan 17, 2015 12:00 am
Israeli Prime Minister Benjamin Netanyahu has called on the United States to interfere to prevent the International Criminal Court (ICC) from conducting an inquiry into the situation in the Palestinian territories, Israeli media reported on Saturday.

Netanyahu had called US Secretary of State John Kerry and asked him to interfere to prevent the court from launching the inquiry, Channel 2 said.

ICC prosecutor, Fatou Bensouda, announced on Friday that the court had opened a preliminary investigation into the "situation in Palestine" after the Palestinian government accused Israel of committing war crimes against the Palestinian people.

Bensouda said that her examination would be conducted "in full independence and impartiality," a decision that has been slammed as "shameful" by the Israeli government.

The Palestinian government acceded to the Rome Statute on January 2 of this year, and the Hague-based court accepted its jurisdiction over alleged crimes committed in "occupied Palestinian territories, including East Jerusalem, since June 13, 2014."

The US Department of State on Friday expressed opposition to the decision of the ICC prosecutor.

The Anadolu Agency could not immediately obtain comments from the Department on the report of Channel 2.

"Israel rejects the absurd decision of the ICC prosecutor," Netanyahu was quoted by his office as saying on Saturday.

"It's absurd for the ICC to ignore international law and agreements, under which the Palestinians don't have a state and can only get one through direct negotiations with Israel."

Netanyahu was reported to have added that the "ultimate folly" of the ICC prosecutor's decision was that the "democracy of Israel", a world leader in the fight against terrorism, was to be taken to court in the Hague, while the "terrorist war criminals of Hamas" were the ones who are going to be pressing the charges.

He said he would not be surprised if the so-called Islamic State of Iraq and the Levant militant group, al-Qaeda, or the Lebanese movement Hezbollah followed suit.

Netanyahu added that Hamas had already announced that it would join Palestinian Authority President Mahmoud Abbas in filing complaints against Israel as a result of the ICC prosecutor's decision.

Israeli Defense Minister, Moshe Ya'alon, meanwhile, criticized the ICC decision, describing it on Twitter as a "hypocritical" one that condones terrorism instead of fighting it.
Last Update: Jan 18, 2015 10:51 am
RELATED TOPICS