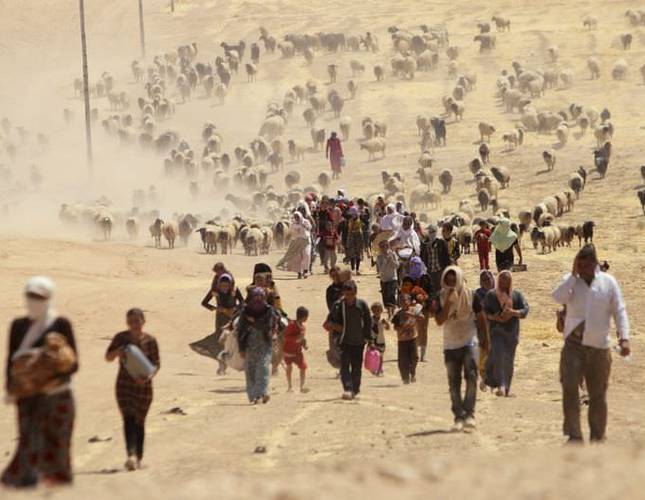 Hundreds of Yazidis, who were living in an open prison for months since ISIS militants captured Sinjar in northern Iraq, were released over the weekend after Kurdish fighters advanced into the town

Islamic State of Iraq and al-Sham (ISIS) militants released at least 200 Yazidis, mostly elderly people and children on Saturday, Iraqi officials said. The Yazidis, who have been under ISIS control since August, were allowed to go to the Peshmerga-controlled Mekteb Halil area.

Kirkuk Governor Najmaldin Karim ordered a security check for the Yazidis, as ISIS militants may use the situation to infiltrate the area and launch attacks. They also underwent a medical check and were transferred to Dohuk where most of their families live. Kirkuk Police Chief Serhat Kadir said an $850,000 ransom was paid to the militants in order to free them.

"These people were released upon the payment of a ransom sum demanded by ISIS, which was paid by businessmen from Irbil and Kirkuk, who, along with tribal leaders, had been working for about a month to ensure the release of women and children," Kadir said.

"These men and women had been held in Mosul," Khodr Domli, a leading Yazidi rights activist told the AFP news agency at the health center. "Some are wounded, some have disabilities and many are suffering from mental and psychological problems," he added.

In the last summer, ISIS militants launched a violent genocide against the ancient Yazidi community in Iraq, causing another humanitarian crisis in the country. While some Yazidi villages near Sincar have been emptied, some of the Yazidis have fled to the Kurdish region, while others have come to Turkey.

ISIS, after capturing the Iraqi city of Mosul as well as other cities from the central Iraqi government, has started targeting Yazidis. ISIS has called on the Yazidi community to either convert to Islam or accept being killed. Yazidis who were unable to flee to safer areas have sought refuge in the mountains. Initial reports said that hundreds of Yazidis have been killed by ISIS and that dozens of children have died of thirst.

ISIS, which has previously captured Christian areas, has forced Christians to pay a tax. Yet, the tax is not applicable for Yazidis, as their belief is not categorized as an acceptable one, according to ISIS.

While the world turns its attention away from the small religious community, the question of whom the Yazidis are has become important. Yazidis are ethnically Kurdish, and their religion includes elements of Judaism, Christianity, Islam and Zoroastrianism. The center of their belief is in the Nineveh province of Iraq.

Yazidis live in Armenia, Georgia, Turkey and Iraq. Yet, the number of Yazidis in Turkey, Armenia and Georgia has dramatically decreased after members of the community preferred migrating to European countries due to the religious discrimination they faced in the aforementioned countries.

Yazidi beliefs distinguish themselves from the mainstream monotheistic religions insofar that Satan plays a different role in their faith.