Sissi seeks more investment from the UAE, which supported the coup 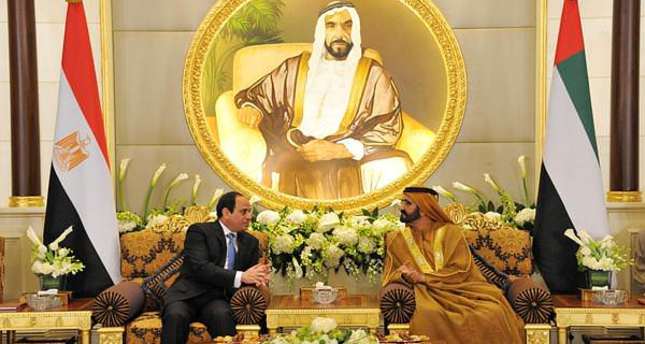 In his visit to the UAE, Sissi claimed that the almost collapsed Egyptian economy will recover with UAE’s investments and increasing economic support along with support

Egypt's President Abdel-Fattah el-Sissi, who headed a bloody military coup in 2013 that resulted in the ouster of the Egypt's first democratically elected president, Mohammed Morsi, paid an official visit to United Arab Emirates that pledged its support for the coup both politically and economically.

Sissi said the relations between the two countries are excellent and will remain special yesterday during his first visit to the oil-rich tiny Arab country. In an interview with the Abu Dhabi TV Channel, Sissi described Egypt's relationship with the UAE as "strong and balanced since it was founded by the late Sheikh Zayed bin Sultan Al Nahyan," the official news agency (WAM) quoted him as saying.

Sissi said that UAE President Khalifa bin Zayed bin Sultan Al Nahyan, the Emir of Abu Dhabi and the commander of the Union Defense Force, and his brothers had followed Sheikh Zayed's path and ensured that relations between the UAE and Egypt must always remain special.

"The Egyptian people can talk about these relations better than any official, especially when it comes to talking about Sheikh Zayed and his sons," Sissi added. He also said that the two countries shared similar views regarding counter-terrorism. "We share the same view that terrorism is a threat to the nations, to the reputation of the tolerant Islam and to all people," he said.

Besides stressing the political alliance, the two presidents underlined the significance of economic cooperation as Egypt's economy is in trouble with foreign debts and the country faces energy problem. Sissi said Egypt will hold a major economic conference on March in the coastal Sharm el-Sheikh. Sissi asked the UAE to make investments in Egypt.

"We welcome you in Egypt and will provide appropriate investment atmosphere. There are genuine investment opportunities in Egypt," Sissi told an audience of businessmen in Abu Dhabi. As he is aware of that his administration cannot meet Egypt's economic needs and demands "It is the role of Egyptian, Arab and foreign investors to upgrade the Egyptian economy," he added.

Sissi also said that "The government of Egypt will remove all obstacles facing the investors by easing licensing procedures and other measures. You are invited to invest in Egypt along with Emirati and Arab investors." He claimed that the obstacles to foreign investments like corruption have been removed.

"We will make use of our geographical position and infrastructure to make Egypt an economic hub. We will expand our reliance on renewable energy to 20 per cent 2020. There are successful wind and solar energy projects in Egypt. Egypt seeks to develop an energy strategy. We seek to realize reforms and diversification of traditional energy used in power plants," he said but did not elaborate how these ideas will become real.

Last year the UAE contractor Arabtec began talks with the Egyptian officials to build a million low-cost homes, one of Egypt's most pressing needs. Egypt in our Hearts, a campaign established by Emirates Red Crescent in mid-July 2013 on the orders of the President, Sheikh Khalifa, has provided aid in the form of food, medicines and educational assistance to thousands of needy Egyptians.

Last December, UAE also approved that 78 health centers, 25 grain silos, railway crossings, 1,488 housing units and hundreds of schools will be built in a few years. The project coordination office for UAE development projects has begun a campaign that aims to train at least 100.000 Egyptians to have a job. According to office, 25.000 Egyptians have been trained so far and 10.000 of them have found job.

Although Sissi claims to better Egypt's economy through increasing alliance with his supporters from the Gulf, his presidency is controversial since the coup, which he headed, was marked as one of Egypt's bloodiest period. On July 3, 2013 the first democratically elected president of Egypt, Mohammed Morsi was toppled after a bloody military coup, headed by the incumbent President and former General Abdel-Fattah el-Sissi.

Morsi was accused of deteriorating the Egyptian economy, aiding Hamas, spying for certain countries and polarizing society. People who were against Morsi and the Muslim Brotherhood went to the streets at the end of June to protest the Islamist government. After the protests started, the army sided with the protesters and gave an ultimatum to Morsi that said he had to resign in two days. Morsi stressed the fact that he was elected and only another election could remove him. The army did accept Morsi's argument of being elected.

While the tension escalated in Cairo among different factions and the army, the people on the streets also expressed different demands. The sit-in protests to show solidarity with Morsi started even before the anti-Morsi protests. Despite the support of the masses the army overthrew Morsi and his cabinet, violating the constitution and universal democratic values.

Morsi and many other prominent political figures that were also either members of the Muslim Brotherhood or related to it were arrested. Pro-Morsi and pro-democracy protesters did not leave the streets. They chanted slogans against Sissi and the coup. Sissi claimed that the protesters were threating national security while making a call to his supporters to go to Tahrir Square. Sissi finally gave the order to clear Rabaa Square and at least 817 demonstrators were killed by Egyptian security forces. Also thousands of people were arrested and tortured.

Gulf countries except Qatar have eagerly supported Sissi as they considered Muslim Brotherhood rule as a threat to their dynasty. Gulf countries, especially UAE, are known with their human rights violations against the dissidents. The UAE is open to all kinds of people from around the world, as long as they come to do business.

Yet, for the others who come to work in the country, the conditions are not in accordance with their wealth. Many reports on the conditions of foreign workers have been released and in many of them the UAE was slammed over its inability to provide sufficient humanitarian conditions for the workers. The UAE, especially Dubai, where labor unions are banned, has long faced criticism from human rights groups who say it turns a blind eye to cases of the non-payment of wages, lack of medical care and sub-standard housing for workers.

Construction workers in the booming Gulf trade hub, which is building the world's tallest tower and man-made islands, have long complained about poor working conditions. The UAE government in 2008 revised the labor laws to include requirements that employers pay for migrant workers' travel, employment permits, medical tests and health care.

It also closed down some workers' camps that do not meet health and safety standards in a crackdown on firms abusing foreign workers. But New York-based watchdog Human Rights Watch said a UAE draft labor law fell far short of international standards for the rights of workers.

Besides the workers' problems, the UAE has also been criticized due to its stance on opposition voices against the government. In a report released by Amnesty International last week, the UAE was accused of an "unprecedented clampdown on dissent," as more than 100 activists have been jailed since 2011 for calling for political transformation. The 80-page report was titled "There is no freedom here: Silencing dissent in the UAE," and included interviews with the victims of the country's repression.

Amnesty International's report on the freedom of expression in the UAE was "one-sided and inaccurate," the Ministry of Foreign Affairs said. Amna al-Muhairy, director of the ministry's Human Rights Department, said the organization rejected the UAE's answers to questions raised by them, something that undermined the report's credibility, reported Wam, the state news agency.

"The UAE regrets that Amnesty International has published a one-sided and inaccurate report," said Ms. al-Muhairy. "The report, based in part on anonymous sources, repeats familiar politically motivated allegations from groups seeking to undermine and overthrow the UAE's successful model of a stable, peaceful, tolerant and diverse society, which has created economic opportunities for millions of people from all over the world."