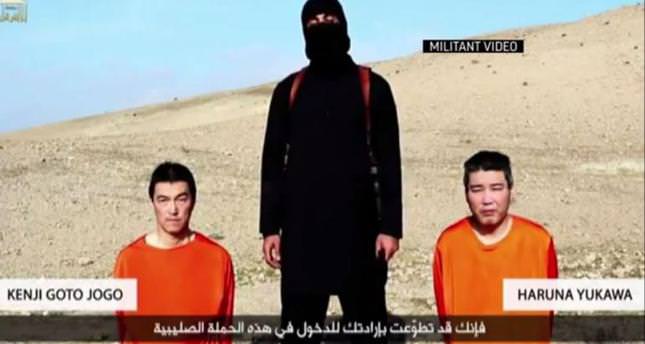 In an online video an ISIS militant said two Japanese citizens will be beheaded unless the Japanese government pays $200 million in ransom, yet Japanese officials said that Tokyo refused to pay the amount

The footage named the men as Haruna Yukawa and Kenji Goto. Yukawa, a private military company operator in his early 40s, was kidnapped in Syria last August after going to the war-torn country to train Western-backed fighters, according to a post on a blog he kept. A video on his online page was titled 'Syria was in Aleppo 2014.' He wrote that "I cannot identify the destination but the next will be more dangerous. I hope to film my fighting scenes during an upcoming visit." Goto is a well-respected Japan freelance journalist. He wrote an e-mail to Associated Press on last October and said that "I am in Syria for reporting. I hope I can convey the atmosphere from where I am and share it."

Japan government refused to pay the ransom. Abe, speaking in Jerusalem on Tuesday towards the end of a six-day tour of the Middle East, said ISIS's threat against the two purported captives was 'unacceptable.' "We strongly demand the immediate release of the Japanese citizens unharmed. The international community needs to respond firmly and cooperate without caving into terrorism," he said. Abe stressed that Japan's aid announced on his trip was for humanitarian purposes, and said Tokyo would keep contributing to peace and prosperity in the region. "We will coordinate with the international community from now on, and contribute more to (the) peace and prosperity of the region. This policy is unwavering and we will not change this policy," he said. Asked whether Japan would pay ransom to secure the captives' release, Abe replied: "With regard to this case, we attach the utmost priority to saving lives, and gathering information with the help of other countries."

In Tokyo, Japan's foreign ministry said it was checking the video to see whether the footage was genuine. Cabinet ministers also announced they were meeting to discuss the government's response to the video.

Goto is a freelance reporter who was based in Tokyo. He has written books on AIDS and children in war zones from Afghanistan to Africa and reported for news broadcasters in Japan. Goto met Yukawa last year and helped him travel to Iraq in June, he told Reuters in August. Yukawa, 43, travelled to Iraq and Syria last year after telling friends and family that he thought it represented a last chance to turn his life around. Over the previous decade, he had lost a business to bankruptcy, lost his wife to cancer and become homeless, according to his father and an online journal. It was not clear what exactly he was doing in the region. Yukawa's father, Shoichi Yukawa, declined to comment, saying he was overwhelmed by the news reports.

The militant in the footage, who spoke with a British accent, appeared to have the same voice as a militant shown with captives in previous ISIS videos. Similar videos have shown captives beheaded, including Western aid workers and journalists. Britain-based Daily Mail claimed that the militant was Jihadi John who previously killed foreign journalists. The video resembled others distributed by ISIS outlets in which captives were threatened or killed. It appeared to be the first time that an ISIS video specifically demanded cash for captives.

ISIS has beheaded and shot dead hundreds of captives mainly Syrian and Iraqi soldiers during its sweep across the two countries, and has celebrated its mass killings in extremely graphic videos. It also holds British photojournalist John Cantlie, who has appeared in other extremist propaganda videos, and a 26-year-old American woman captured last year in Syria while working for aid groups. U.S. officials have asked that the woman not be identified out of fears for her safety.