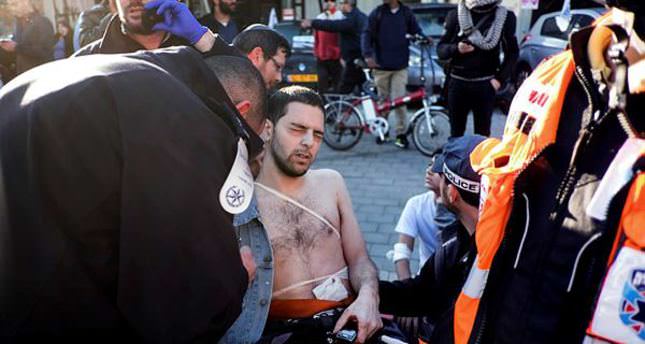 by Anadolu Agency Jan 21, 2015 12:00 am
A senior leader of Palestinian resistance faction Hamas hailed a stabbing attack by a Palestinian youth, which left nine Israelis wounded on a Tel Aviv bus, as "heroic and daring."

"The attack that targeted the Zionists in Tel Aviv is heroic and daring," Ezzat al-Rashq, a member of Hamas political bureau, said on Twitter on Wednesday. "It is the natural response to the occupation's crimes and terrorism against the Palestinians," he added.

Earlier in the day, a 23-year-old Palestinian youth boarded a Tel Aviv bus and attacked its passengers with a knife, leaving five of them with moderate to serious injuries while four others were lightly wounded, Israeli police said.

The Palestinian youth has been identified as Hamza Mohamed Hassan Matrouk, from the Tulkarm refugee camp, a Palestinian security source has said.

"Matrouk, who left the refugee camp early this morning [to carry out the attack], does not belong to any political faction," the source, requesting anonymity, told The Anadolu Agency.

Matrouk was shot in the leg earlier near the scene of the attack before being arrested, according to police.

Israeli police, meanwhile, said Matrouk would be held for three days before being referred to an Israeli military court.

While no Palestinian group has claimed responsibility for Wednesday's bus attack, leading Hamas member Ezzat al-Rashq described it as "heroic and daring."