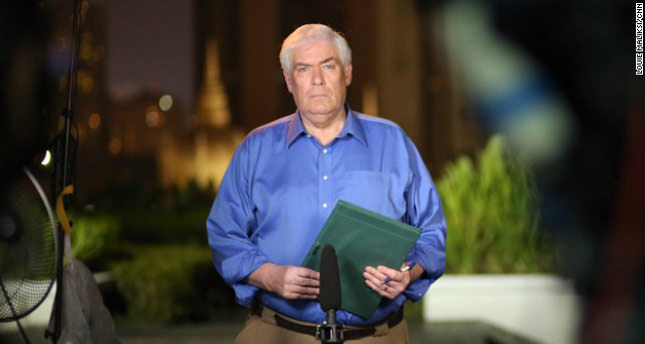 The resignation of veteran CNN anchor Jim Clancy following a Twitter fight with what he called pro-Israeli public relations agents has once again brought the media front of the Israeli-Palestinian conflict into focus.

Clancy announced last weekend that he left the network after 34 years, without specifying the reason of his resignation. His resignation came, however, more than a week after he was involved in an argument on Twitter over "Hasbara," a Hebrew word referring to public relations efforts by Israel supporters on social media.

Clancy was certainly not the first journalist to suffer professionally following comments or work that was critical of Israel. But a widely raised issue has been that Israel has developed media strategies to defend its policies and advance its narrative by using certain public relations techniques.

A report leaked in 2009 revealed that the Washington-based "The Israel Project" prepared a guideline for "leaders who are on the front lines of fighting the media war for Israel." The guideline was said to be a framework document that shed light on Israel supporters' public relations approach. For instance, regarding to how to deal with a tough questions, the booklet advises that spokespersons should deflect the inquiries and say Palestinians are making a "demand" on the ground. The idea behind the reasoning is that Americans don't like people who make demands.

"Then say 'Palestinians aren't content with their own state. Now they're demanding territory inside Israel.'" The efficacy of the strategy may be questioned in light of what appears to be shifting U.S. public opinion toward the Israeli-Palestinian conflict. In 2009, in a recurring conflict between Israel and Hamas in Gaza, 18-to-29-year olds in the U.S. blamed Hamas more by a 23 percent to 14 percent margin, according to Pew Research Center.

But during Israeli's 51-day offensive into Gaza last July and August that left more than 2,000 Palestinians dead, a survey among the same demographic found that 29 percent blamed Israel more for the wave of violence there, while 21 percent blamed Hamas. With the rise of social media, Israel's image as the self-proclaimed "most moral army in the world" has been badly damaged.

The question that emerges, considering the number of journalists who have faced reprimand because of critical comments - mainly on social media - about Israel, is whether these secret strategies include pressuring, lobbying and infiltrating media outlets to suppress even moderately anti-Israeli voices to ensure that most coverage remains biased in its favor. The following are some of the journalists who were suddenly unemployed following unfavorable comments about the state of Israel.

News anchor Rick Sanchez was fired by CNN in 2010 after he made remarks during a radio interview that CNN and the other networks are all run by Jews, and he called famous Jewish television host Jon Stewart a "bigot."

"I'm telling you that everyone who runs CNN is a lot like Stewart and a lot of people who run all the other networks are a lot like Stewart, and to imply that somehow they, the people in this country who are Jewish, are an oppressed minority?" Sanchez asked in the controversial radio appearance.

A day after the interview, CNN announced Sanchez was no longer with the company.

- One of Sanchez's CNN colleagues was fired from her post as an editor responsible for Middle East coverage after she posted a tweet in which she expressed admiration for a Lebanese cleric considered an inspiration to the Hezbollah militant movement, a longtime foe of Israel.

"It is sad to hear of the passing of Sayyed Mohammad Hussein Fadlallah. One of Hezbollah's giants I respect a lot," wrote Octavia Nasr, following the Grand Ayatollah's death.

The tweet was immediately picked up by pro-Israeli groups, and the Jewish human rights group Simon Wiesenthal Center released a statement that demanded Nasr "apologize to all victims of Hezbollah terrorism whose loved ones don't share her sadness over the passing of one of Hezbollah's giants."

CNN fired the veteran correspondent, calling it an error to write such a tweet.

American journalist Helen Thomas, famous for her coverage of every U.S. president since Dwight Eisenhower, announced her immediate resignation in 2010 from Hearst News Service following controversial remarks she made regarding the Israeli-Palestinian conflict.

In her comments at a celebration for Jewish heritage month at the White House, Thomas told a rabbi to "get the hell out of Palestine" and "go home" to Poland, Germany, America and "everywhere else."

The comments were condemned by the White House as "offensive" and "reprehensible, and the veteran corresponded apologized for the remarks. But her apology did not stop demands for her ouster.

During Israel's latest offensive on the Gaza Strip last summer, in which more than 2,000 Gazans were killed, one reporter received widespread praise for his coverage of the conflict.

Ayman Mohyeldin, the NBC News correspondent in Gaza, was told by NBC executives in July 2014 to leave the region immediately.

Mohyeldin witnessed and reported on the brutal killing by Israeli forces of four young boys as they played soccer on a beach in Gaza. He posted the details of the attack and others on Twitter, including disturbing photographs he took of the anguish.

Around the same time, CNN removed correspondent Diana Magnay from covering the conflict after she tweeted that Israelis who were cheering the bombs as they hit Gaza were "scum."

Following a bombardment of a Gazan hill, Magnay tweeted, "Israelis on hill above Sderot cheer as bombs land on #gaza; threaten to 'destroy our car if I say a word wrong'. Scum."

A CNN spokesperson said Magnay was assigned to Moscow.

Clancy's resignation last weekend appears to be the latest in a string of incidents of journalist who have paid a hefty price for not knowing their place when it comes to Israel.

"The cartoons NEVER mocked the Prophet," Clancy tweeted January 7. "They mocked how the COWARDS tried to distort his word."

Oren Kessler, a research director at the Washington-based Foundation for the Defense of Democracies, opposed Clancy's statement, calling it "absolutely untrue" because Charlie Hebdo had been targeted in the past for publishing an issue in which Prophet Muhammad was listed as a "guest editor."

In response, Clancy tweeted, "Hasbara?" The dictionary meaning of the Hebrew word hasbara is "explanation," but, in discussions about Israel and Palestine, it is used as a term referring to the promotion of positive information about Israel and Zionism.

Others on social media, including some openly pro-Israel bloggers, condemned Clancy's tweets, to which he replied, "These accounts are part of a campaign to do PR for #Israel @JewsMakingNews @elderofziyon Nothing illegal - but PR not HR : Human Rights [sic]."

Clancy's resignation was immediately celebrated by his opponents, with pro-Israel blogger Elder of Ziyon tweeting, "Elder gets results! Jim Clancy fired from CNN."