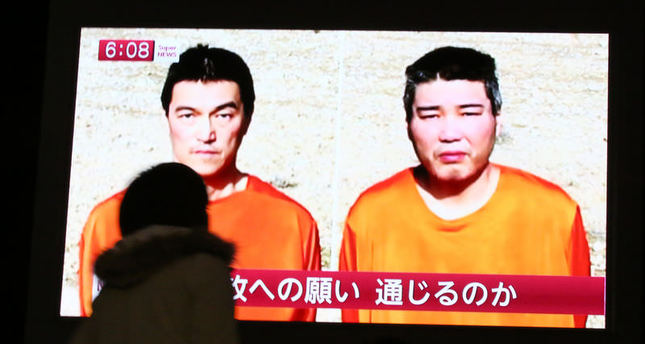 by Jan 23, 2015 12:00 am
The fate of two Japanese hostages being held by the ISIS was unknown on Friday as a deadline set by the group expired.

"So far the captors are silent, but we expect something from them soon," said an activist, who is based in the north-eastern Syrian province of Raqqa, an ISIS stronghold.

He said the 72-hour deadline for payment of a ransom had passed early on Friday.

The activist, who asked not to be named for fear of reprisal from the extremists, said ISIS had established contact with the Japanese government.

"The situation remains extremely severe, and we just continue to do what we have to do for them to be released as early as possible," Chief Cabinet Secretary Yoshihide Suga told a news conference in Tokyo.

The militant group threatened in a video posted on the internet on Tuesday to kill Kenji Goto, a freelance journalist, and Haruna Yukawa, who works for a private security firm, unless a 200-million-dollar (178-million-euro) ransom payment was made within 72 hours.

Asked if there has been any contact from the group, Suga said, "Nothing in particular."

The top government spokesman declined to give details of the ongoing diplomatic efforts.

Earlier in the day, Goto's mother Junko Ishido implored the captors at a news conference, "Please allow him to be released."

"Kenji is not an enemy of ISIS. He went only to rescue his acquaintance," Ishido said, referring to Yukawa.

In Syria meanwhile, six children were among 32 civilians killed in airstrikes by regime warplanes near the capital Damascus, a monitoring group said.

The Syrian Observatory for Human Rights said the bombardment targeted a rebel-held district in the region of Eastern Ghouria on the outskirts of Damascus. There was no official comment.