US acknowledges results of ISIS campaign while Iraq asks for more 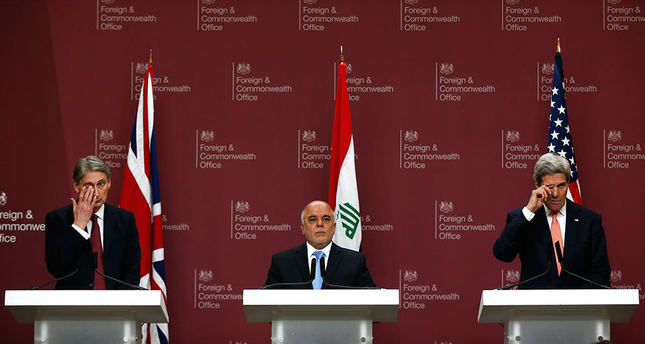 by Associated Press Jan 23, 2015 12:00 am
The U.S. and its allies sought to put a good face on the coalition's deliberate campaign to roll back the self-proclaimed Islamic State of Iraq and al-Sham (ISIS) group in Iraq and Syria on Thursday, boasting of having killed thousands of militants while acknowledging that ousting the group from key cities remains a distant aspiration.

Speaking to reporters in London alongside the British foreign minister and Iraqi prime minister, U.S. Secretary of State John Kerry said nearly 2,000 air strikes had arrested the Islamic State group's momentum, squeezed its finances, killed "in the single digit" thousands of fighters and eliminated half of the group's leadership.

A U.S. Central Command official said a conservative estimate would be 6,000 militants killed. The official was not authorized to discuss the matter publicly, and so spoke on condition of anonymity.

Kerry's remarks came as Iraqi Prime Minister Haider al-Abadi told The Associated Press a day before the London meeting that the U.S. and its partners weren't moving fast enough in supplying Iraq with weapons.

"There is a lot being said and spoken, but very little on the ground," al-Abadi told the AP.

Those comments were met with a sharp rebuke from Defense Secretary Chuck Hagel at the Pentagon.

"I do disagree with the prime minister's comments. I would say even further, I don't think they're helpful," Hagel told reporters. "We have a coalition of over 60 countries that have come together to help Iraq. And I think the prime minister might want to be a little more mindful of that."

Hagel, who is stepping down next month, rattled off a list of weapons and equipment the U.S. has provided to Iraq, including at least 1,500 Hellfire missiles, 250 mine-resistant vehicles and thousands of small arms weapons and ammunition. He added that three of four planned camps to train Iraqi troops are up and running and the fourth will be operating soon.

Kerry, at a meeting of anti-ISIS coalition partners, acknowledged that the international coalition "can do better" at slowing the flow of foreign recruits, curbing the militant group's fundraising and challenging its extremist ideas, which have seized the imagination of radicals in Europe, like the gunman who killed four hostages at a kosher grocery in Paris this month.

Kerry, British Foreign Secretary Philip Hammond and al-Abadi spoke after meeting with officials from 21 countries to take stock, as Kerry put it, of progress made by the often-divided coalition against ISIS militants who control a third of Iraqi and Syrian territory.

"I have asked people for more support and I think my call didn't go unnoticed," he said.

Kerry said the ISIS group had been "definitively" halted in Iraq, even though the strategic city of Mosul remains in ISIS control. Kerry said Iraqi ground troops had retaken 270 square miles of territory and deprived the militants of the use of 200 oil and gas facilities.

But he acknowledged that "we have decided there are things we can do more of," including beefing up efforts to halt foreign fighters, curb the ISIS's finances and publicly counter the group's social media presence.

U.S. intelligence officials say the pace of foreigners traveling to fight with the ISIS group has not slowed, and that the group's ideology is spreading.

Hagel said another important measurement is that the insurgents are now on the defensive, are having difficulty recruiting and have seen disruptions in supply lines and communications abilities.

But officials acknowledged that Iraq is a long way from retaking Mosul and other parts of its territory.

"Neither short nor easy," is how Kerry characterized the campaign.

The meeting also allowed Iraq and its allies to present a united front after al-Abadi's complaints and Hammond's remarks earlier Thursday that Iraqi forces were in a "state of disarray," unprepared to start significant combat operations against the extremists.

Kerry said the U.S. and its allies were training Iraqi forces "as fast as possible," with a goal of creating 12 new Iraqi brigades. Iraq was also receiving equipment, including 250 mine-resistant armored vehicles and a "very significant number" of M16 assault rifles, Kerry said.

Hammond said the coalition hoped to defeat both the group and its ideology "however long it takes and wherever it leads us."

But the leaders gave few details of new commitments of arms, troops or money for the effort.

Al-Abadi raised another problem looming for Iraq: falling oil prices, which he said had been "disastrous" for Iraq's budget.

"We don't want to see a reverse of our military victory due to our budget and fiscal problems," he said.

Hammond assured him that would not happen.

"This campaign is not going to fail for the want of some guns or some bullets in the hands of the Iraqi security forces," he said.