Unrest on anniversary of Egyptian uprising leaves at least 19 dead 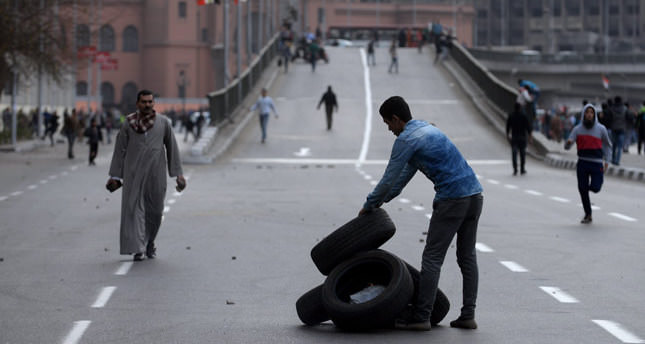 On the fourth anniversary of the Jan. 25 Revolution, calls for democracy were overshadowed once again by police brutality, as at least 19 people were killed during nationwide protests

The anniversary of the Jan. 25 Revolution is recalled in the minds of many Egyptians as a revolution and a set of societal demands from the government under the autocratic rule of former President Hosni Mubarak. Yet, the call for democracy in 2011 was overshadowed by police intervention that resulted in nearly 900 protestors being killed during violent clashes. Once again, pro-Morsi Egyptians were subjected to police violence on Sunday during nationwide protests in which at least 19 people were reportedly killed. For the last four years, every anniversary of the 2011 revolution has resulted in dozens of protestors killed by police, revealing police violence and abuse of human rights.

Sources in the National Alliance for the Defense of Legitimacy, the main support bloc of ousted President Mohamed Morsi, said two protesters were killed when police moved in to break up a pro-Mori march in the Nile Delta province of Beheira, according to Anadolu Agency. Another source in the bloc said a third protester was killed in similar circumstances in the coastal city of Alexandria.

Egypt tightened security on Sunday on the anniversary of the popular uprising. Egypt state run news agency MENA said 22-armored army vehicles were stationed around Cairo's Tahrir Square, the symbolic heart of the revolt that ended 30 years of iron-fisted rule under Mubarak and raised hopes of greater freedoms. Roads leading to the square were sealed off.

As the 2011 uprising still resonates in world media, the commemoration of the protesters killed in the revolt gets worldwide attention, condemning police brutality. Jan. 25 marks a full-fledged popular uprising nationwide that demanded regime change to more democratic rule. However, under President Abdel-Fattah el-Sissi, military rule has left no compromise, as the country has suffered from ongoing instability.

In a scheduled televised address on Saturday evening, President el-Sissi praised the desire for change demonstrated by Egyptians four years ago, but said it would take patience to achieve all of "the revolution's goals." While former army chief Sissi has taken steps to improve Egypt's economy, human rights groups accuse him of restoring authoritarian rule to the most populous Arab state. Opponents say new laws, including one restricting protests, have rolled back freedoms won in the uprising.

The revolt against Mubarak erupted on Jan. 25, 2011, with hundreds of thousands of protesters taking to the streets across Egypt for 18 days until he stepped down. The Arab Spring first broke out as thousands of people took over Tahrir Square, demanding freedom and social justice and ending Mubarak's long rule in 2011. Since then, Egypt has faced continuing political turmoil that has brought chaos to Egyptian's daily lives. The anti-Mubarak revolt was fuelled by police abuses and the corruption of the strongman's three-decade rule. After the fall of Mubarak, Muhammed Morsi came to power in the first democratically held election, which raised hopes for democracy in the country. However, the rule of former President Morsi was cut short through a coup d'état organized by a coalition led by the former Egyptian army chief General el-Sissi. The first democratically elected Muslim Brotherhood government of Morsi was overthrown and the Egyptian constitution suspended in July 2013 after his one-year rule. Pro-Morsi groups describe his removal as a military coup, while others insist it was a popular military-backed uprising. Many Egyptians believes that incumbent President el-Sissi signals a return to the authoritarian security state, calling him a new incarnation of Mubarak.

Meanwhile, Egyptians in New York held a rally Saturday to protest what several called the "hijacking" of their Jan. 25 Revolution by the army. Several hundred protesters gathered on 6th Avenue in midtown Manhattan, demanding that President el-Sissi step down on the fourth anniversary of the revolution that toppled former President Mubarak. Chanting slogans like "Free Egypt," the protesters formed the "Rabaa sign," – four fingers in the air, thumb resting on the palm. The sign has come to represent demonstrations protesting the July 2013 ouster of Egypt's first democratically elected president and the ensuing violence that killed hundreds of people.