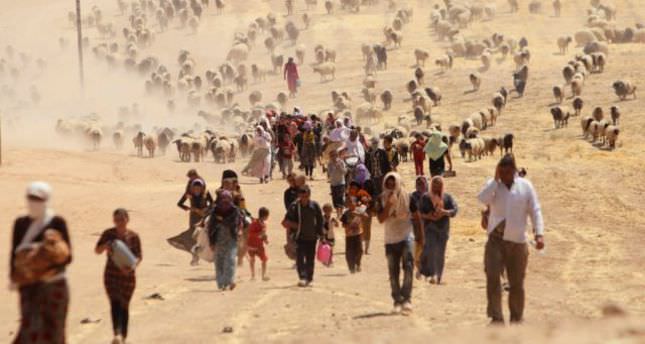 At least 130,000 Yazidis have been internally displaced and sought refuge in Dohuk and Irbil in the Kurdish north of Iraq where regional Kurdistan Regional Government (KRG) authorities have been struggling to deal with one of the largest refugee movements in decades.

The huge influx of people from Mosul and Sinjar over last summer resulted in a major humanitarian crisis in the region added to by the Syrian refugee crisis. Since the crisis erupted, there are "some 3.1 million internally displaced Iraqis throughout the country, including 1 million who had been displaced between 2003 and 2013 and 2.1 million who were displaced in 2014," according to U.N. figures.

The Islamic State of Iraq and al-Sham (ISIS) launched a major offensive, overrunning many areas in northern Iraq and triggering a mass exodus of the local population to more secure locations. With regard to the increasing insecurity in the region, around 150,000 people reportedly left their homes as authorities set up camps in nearby towns.

However, Iraq's displaced Yazidis, who suffered in the harsh summer conditions, hunkered down this time in difficult winter conditions. Human suffering in refugee camps still remains a major concern. "Life is very hard here. When the winter started, we had nothing to wear, and very basic food," said Hassan Hisn Semmo, who sheltered himself from the pouring rain under a tent, as reported by Agence France-Presse.

"It is shocking to see how the humanitarian situation in Iraq has deteriorated since my last visit. On top of large numbers of Syrian refugees, 2 million Iraqis were displaced by violence in 2014 alone. Many of these innocent people have been uprooted multiple times as they seek safety amidst shifting frontlines," the U.N. refugee agency's special envoy, Angelina Jolie, said during her visit to refugee camps in Dohuk, where more than 20,000 people from the Yazidi minority community have been living since early August 2014. "The needs so dramatically outstrip the resources available in this vast crisis. Much more international assistance is needed," she added.

ISIS has launched a campaign of slaughter against the Yazidi community in Iraq since August causing a devastating humanitarian crisis in the country. After violent ISIS militants stormed the northern Iraqi town of Sinjar, tens of thousands of Yazidis fled possible slaughter at the hands of the militants surrounding them, taking refuge on Mount Sinjar.

At least 40,000 members of the Yazidi sect, many of whom are women, children and elderly, had hidden in several locations on the mountain, falling victim to the harsh conditions, with some dying of thirst. The death of 40 children of displaced families was reported as a direct consequence of violence, displacement and dehydration. Up to 25,000 Yazidi children were in dire need of aid including drinking water, food and sanitation services.

While some of the Yazidi villages near Sinjar have been abandoned, some Yazidis fled to Kurdish regions and some entered Turkey. ISIS started targeting Yazidis after capturing the city of Mosul and a few other cities from the central Iraqi government. ISIS forces the Yazidi community to either convert to Islam or be killed. Yazidis who were unable to flee to safer areas went to the mountains.

Yazidis are a Kurdish ethnic and religious minority, which includes elements of pre-Zoroastrian Iranian beliefs, Christianity, Gnosticism, Judaism, and Islam. Yazidis primarily in Nineveh province in Iraq, but also live in Armenia, Georgia, Turkey and other regions in Iraq. The number of Yazidis in Turkey, Armenia and Georgia has dramatically decreased after members of the community preferred migrating to European countries due to the problems they faced in those countries due to their beliefs.