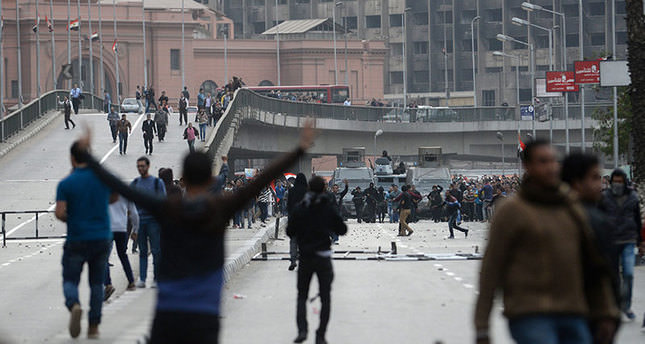 As the death toll from violence that erupted on the fourth anniversary of Egypt's January 25 uprising on Sunday has reportedly risen to 23, police violence during the protests has drawn worldwide attention. Human Rights Watch (HRW) condemned the excessive use of force by the police while urging for an independent investigation.

As police violently dispersed an anti-coup march in Alexandria ahead of the uprising, two women, Sondos Reda Abu Bakr, 17, and Shaimaa al-Sabbagh, 32, were killed on January 23-24 when security forces broke up protests. On the third anniversary of the uprising, at least 64 people were reportedly killed across Egypt in clashes between protesters and security forces.

The January 25 marks the full-fledged popular uprising nationwide that demanded regime change and more democratic rule, resulting in the ouster of long-serving President Hosni Mubarak. However, under President Sissi, military rule has left no compromise as the country has suffered from ongoing instability.

The Arab Spring first broke out in Egypt when thousands of people took over Tahrir Square demanding freedom and social justice, ending Mubarak's long rule in 2011. After the fall of Mubarak, Mohammed Morsi came to power in the country's first democratic election, which raised hopes for democracy in the country.

However, the rule of former President Morsi was cut short by a coup organized by a coalition led by then Egyptian army chief General Sissi. Pro-Morsi groups describe his removal as a military coup, believing that the incumbent President Sissi signals a return to the authoritarian security state, calling him a new incarnation of Mubarak.