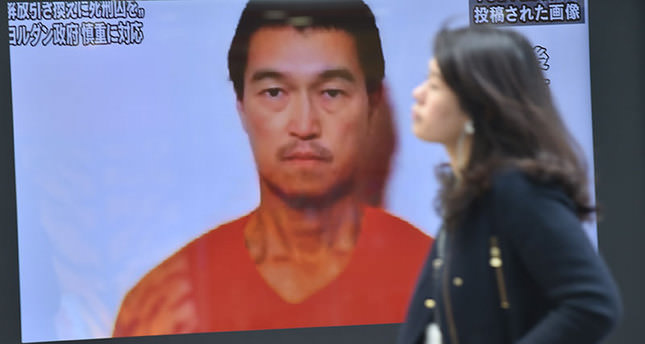 by Jan 27, 2015 12:00 am
An audio message released online on Tuesday appeared to show Japanese journalist Kenji Goto pleading for the Jordanian and Japanese government to complete a prisoner exchange with his ISIS captors in order to save his life.

In the message, released in an online video showing a still shot of a chained Goto, the journalist calls for the immediate release of Sajida al-Rishawi, a convicted terrorist held in Jordan.

Goto says the group will kill him and a Jordanian Air Force pilot captured in Syria in November if al-Rishawi is not freed within 24 hours.

"Her for me, a straight exchange. Any more delays by the Jordanian government will mean they are responsible for the death of the pilot which will then be followed by mine. I only have 24 hours left to live, and the pilot has even less," Goto says.

German press agency dpa could not confirm the authenticity of the recording, which was disseminated by Islamic State of Iraq and al-Sham (ISIS) supporters on social media - the group's usual tactic for releasing material since social media sites cracked down on its official accounts last year.

On Sunday, ISIS claimed responsibility in an internet radio broadcast for the beheading of Haruna Yukawa, one of the two Japanese captives.

The Japanese government said Tuesday it had called for the cooperation of Jordan and other countries to win Goto's release.

"We are asking for the cooperation of Jordan and relevant countries to bring about the immediate release," Chief Cabinet Secretary Yoshihide Suga told a news conference.

Suga said Tokyo is not aware of a prisoner-swap plan.

The militant group first demanded a 200-million-dollar ransom for the release of Goto and Yukawa in a video posted online a week ago. Its deadline for the payment expired on Friday.