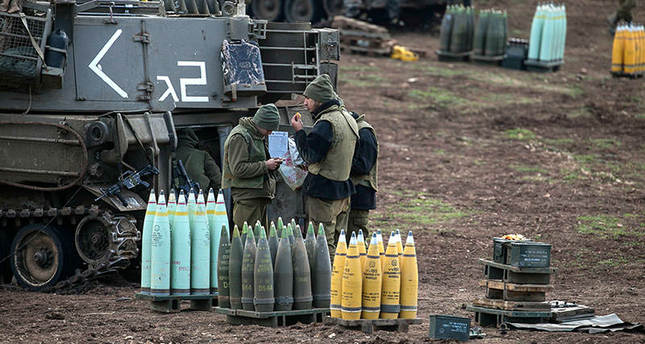 by Compiled from Wire Services Jan 28, 2015 12:00 am
Israeli fighter jets have launched a series of airstrikes at a Syrian army post in the Golan Heights in response to the two rockets fired from Syria into the Israeli-held sector of the region a day earlier, Israeli army radio reported on Wednesday.

The airstrikes, he said, aided at "sending a clear message: There's a price in enabling attacks from Syrian territory."

Defense Minister Mosheh Ya'alon, for his part, held the Syrian regime of Bashar al-Assad responsible of the escalation in the region.

"The regime in Syria is fully responsible of firing rockets from its lands against Israel," he said.

"It is a clear message that Israel will respond with firmness and strength to any breach in the Golan Heights," he added,

On Tuesday, two rockets fired form the Syrian side of the Golan Heights landed inside the Israeli-occupied sector, but without causing causalities.

No group has claimed responsibility for the rocket firing, which come two weeks after Hezbollah accused Israel of killing six of its fighters - along with six Iranians - in a drone strike in the Syrian town of Quneitra.

The slain fighters included two Hezbollah commanders and the son of Imad Mughniyah, a Hezbollah military commander killed by a car bomb in Syria in 2008. So far, Israel has neither confirmed nor denied the airstrike.

For over two years, Hezbollah has been openly engaged in the Syrian conflict, fighting alongside the forces of Syrian President Bashar al-Assad.

In Washington, State Department spokeswoman Jen Psaki told reporters U.S. officials "do not want to see an escalation of the situation." Psaki said the United States calls "upon all parties to avoid any action that would jeopardize the long-held ceasefire between Israel and Syria."