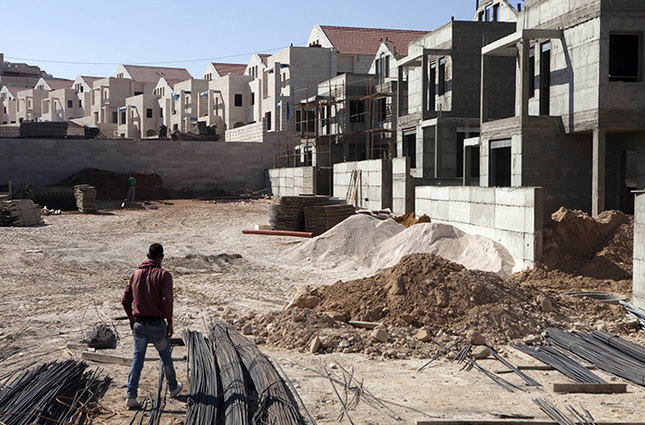 by Mehmet Çelik Jan 30, 2015 12:00 am
The Israeli government has published legal tenders for its new settlement project that will add 430 new settlements in the occupied West Bank, Terrestrial Jerusalem, an Israeli non-governmental organization reported on Friday. The report said that Israel's new settlement project, the first since October 2014, will add 430 new homes in the already occupied areas, with 112 intended to be built in Adam; 156 in Elkana, 78 in Alfei Menashe and 84 in Kiryat Arba. The new settlement project, announced a month and a half before the March 17 elections by the Housing and Construction Ministry, is expected to intensify tensions between Israel and the Palestinians in the occupied territories, a pre-election strategy used to appeal to the right-wing electorate by the ruling Likud party. Such a move also makes two-state-solution which is favored by the opposition to the far-right wing, increasingly unlikely, adding extra strength to the Likud party.

The March 7 elections were called following Israeli Prime Minister Benjamin Netanyahu's decision to dissolve the governing coalition. Recent polls indicate low support for Netanyahu's re-election, and this has been suggested as a possible reason for Israel's current tensions with Hezbollah on the Lebanon border and the new settlement project.

The U.S. administration has also signaled 'distance' in their current relationship with Israel, with both U.S. President Obama and U.S. Secretary of State John Kerry refusing to meet Netanyahu prior to March 7 elections during his visit to Washington to attend the talks on Iran. "I am declining to meet with him simply because our general policy is, we don't meet with any world leader two weeks before their election," Obama said in a recent CNN interview. Netanyahu has courted controversy of late after his attendance at an anti-terrorism rally, which was held in Paris after the massacre at Charlie Hebdo magazine and the hostage crisis in a Jewish store that left 16 dead drew outrage from around the world. Israel-based daily Haaretz newspaper claimed that the French President Francois Hollande asked the Israeli Prime Minister not to attend the anti-terrorism rally.

Tensions have also risen between Hezbollah and Israel, following Israel's killing of a number of senior Hezbollah officials and Mohammad Allahbadi, a commander in Iran's Revolutionary Guards, in Syria's Golan Heights January 18. Hezbollah vowed to respond harshly and take their revenge. Iran also condemned and threatened Israel that accused Iran of provoking Hezbollah. A missile fired by the Lebanese Hezbollah group struck an Israeli military convoy on Wednesday. Israel, which reported unspecified casualties on the Israeli side, responded by firing at least 50 artillery shells into Lebanon in a significant escalation along the volatile border. The United Nations said a U.N. peacekeeper was killed in southern Lebanon, in an incident likely related to the border flare-up.

Netanyahu's rhetoric has also sharpened towards building new settlements after Palestine's bid to join the International Criminal Court, with the hopes that Israel would face punishments for its alleged war crimes, and the building of settlements, which are considered illegal according to international law. Despite condemnation by the EU states, the United Nations, and international community, Israel has continued to build the illegal settlements in the occupied territories.

Since gaining control of the West Bank in the 1967 Six-Day War, Israel has been building settlements for its citizens as it continues to occupy new territories. The approaching elections seem to affect Israel foreign policy as the tiny country and only non-Muslim country in the region has become more offensive.