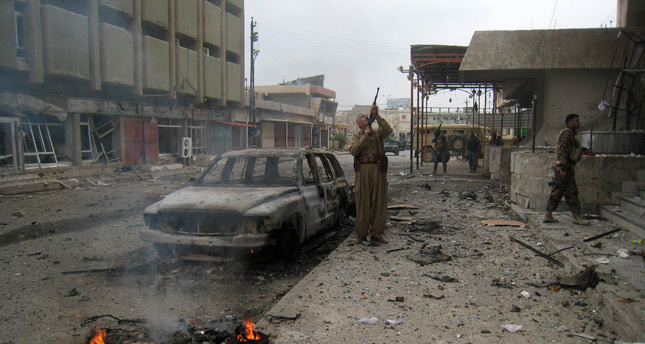 ISIS militants launched assaults on Kurdish forces to seize the control in Kirkuk after losing the battle in center of Kobani in Syria. The militants also carried out attacks in Baghdad on the same day

Islamic State of Iraq and al-Sham (ISIS) militants struck at Kurdish forces southwest of the Iraqi city of Kirkuk on Friday morning, while bombs in Baghdad and Samarra killed at least 21 people, security and medical sources said. Police in the northern province of Kirkuk said ISIS launched mortars and attacked positions of Kurdish peshmerga fighters in four districts southwest of Kirkuk city. A peshmerga officer told Reuters his forces had recaptured the district of Mariam Bek but said clashes were ongoing in Tal al-Ward, Maktab Khalid and Mullah Abdullah. Medical sources said at least four Kurdish fighters were killed in the fighting, including senior commander Brigadier Sherko Fatih, and at least 70 others were wounded.

Security sources said at least 18 people were killed when two bombs went off in Baghdad's Bab al-Sharqi district on Friday morning, home to a large market and across the Tigris River from the Green Zone, which houses most government buildings. Bombings are frequent in Baghdad, where Sunni insurgents from ISIS, which controls large swathes of territory in Iraq's north and west, regularly conduct suicide attacks. Three civilians were later killed and at least 10 others wounded in northwestern Baghdad when mortars landed in residential neighborhoods, police and medics said. Police in the holy city of Samarra, about 125 km (80 miles) north of the capital, said two suicide bombers targeted a security checkpoint in the city center, killing three and wounding five members of the police and Shi'ite militias. Security forces captured two suicide bombers before they could detonate their explosives at a hotel in Iraq's Kirkuk province Friday, officials said. There was a third bomber involved in the attack on the Qasr Hotel, who succeeded in exploding his vest, but apart from killing himself, he did not cause any civilian casualties.

More than 750 peshmerga have been killed in combat since ISIS overran their defenses in northern Iraq last summer, prompting U.S.-led air strikes. The Kurds have now regained most of the ground they lost in August. The Kurdish forces have not been successful only in Northern Iraq but also in Syria's Kobani that witnessed fierce battles between ISIS militants and armed Kurdish forces. However, peshmerga commanders complain they remain ill-equipped compared with the militants, who plundered Iraqi arms depots when they overran Mosul in June.