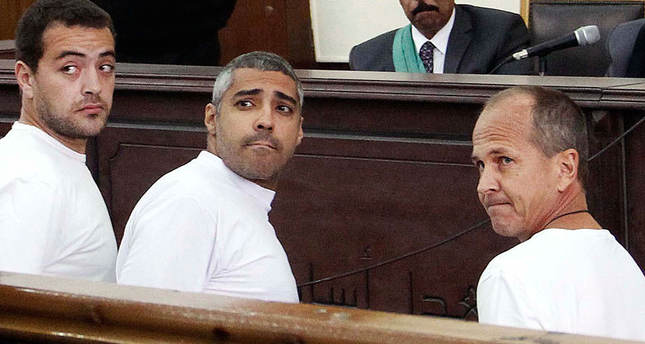 by Anadolu Agency Feb 01, 2015 12:00 am
Australian journalist Peter Greste, an Al Jazeera reporter who has been jailed in Egypt for over a year, was released on Sunday after having received a presidential pardon, a security source has said.

Greste has been released from prison and is currently at Cairo Airport waiting for a plane for his native Australia, the official, requesting anonymity, told The Anadolu Agency.

Egyptian President Abdel-Fattah al-Sisi issued a decree allowing the release and deportation of the reporter, the source added.

In June, Greste and two other journalists - Egyptian-Canadian Mohamed Fahmi and Egyptian Baher Mohamed - were all given jail terms ranging in length from seven to ten years each after being convicted of abetting terrorists and spreading false news.

Greste, Fahmi and Mohamed have all been held by Egyptian authorities since being arrested in December 2013 from a Cairo hotel.

A number of western governments had called for the release of Greste and Fahmi amid an international solidarity campaign launched by Al Jazeera to press for the journalists' release.

Sisi has recently issued a decree allowing foreigners facing prosecution in Egypt to be extradited, prompting speculation that Greste and Fahmi were on the verge of receiving presidential pardons.