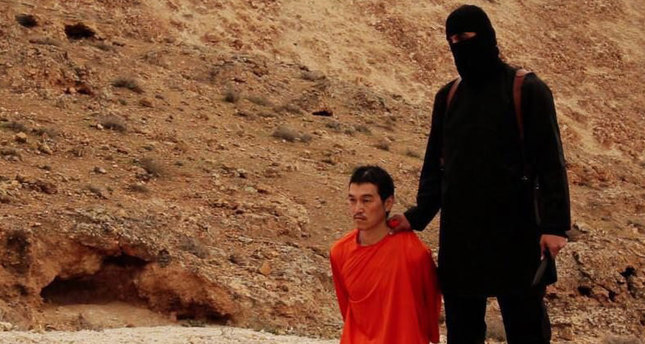 ISIS announced that the second Japanese hostage, Kenji Goto, was beheaded while Japanese officials were struggling for his release. The international community, including Turkey, has strongly condemned the brutality

Two weeks ago, Japanese Prime Minister Shinzo Abe who was on a Middle East tour, promised to give $200 million for battling Islamic State of Iraq and al-Sham (ISIS). Immediately after his words, ISIS announced that two Japanese citizens were abducted in Syria. The hostages were Haruna Yukawa and Kenji Goto.

Yukawa, a private military company operator in his early 40s, was kidnapped in Syria last August after going to the war-torn country to train Western-backed fighters, according to a post on a blog he kept. A video on his online page was titled 'Syria was in Aleppo 2014.' He wrote that "I cannot identify the destination but the next will be more dangerous. I hope to film my fighting scenes during an upcoming visit."

Goto was a well-respected Japan freelance journalist. He wrote an e-mail to Associated Press on last October and said that "I am in Syria for reporting. I hope I can convey the atmosphere from where I am and share it." Goto has written books on AIDS and children in war zones from Afghanistan to Africa and reported for news broadcasters in Japan.

Goto met Yukawa last year and helped him travel to Iraq in June, he told Reuters in August. Yukawa, 43, travelled to Iraq and Syria last year after telling friends and family that he thought it represented a last chance to turn his life around. Over the previous decade, he had lost a business to bankruptcy, lost his wife to cancer and become homeless, according to his father and an online journal. It was not clear what exactly he was doing in the region.

Last week, both of these Japanese citizens were beheaded by ISIS. The news of Goto's purported killing sent Japan into shock and mourning early Sunday morning, days after his plight as a hostage in Syria united many people in praying for his release. "I want to cuddle with the people. That's the best way to express my approach," Goto, 47, said about his work. "By cuddling with them, I can talk with the people. I can hear their views their pain and their hopes."

The 2005 book he wrote about the suffering of children in Sierra Leone was titled "We Want Peace, Not Diamonds." But Goto had always stressed he was not a war reporter. He had insisted he was instead devoted to telling the story of regular people, one step removed from the war zone. That took him to refugee camps and orphanages. He told the stories of children suffering violence, hunger and nightmares. In a testament to his charm and integrity, people responded with an outpouring of support to try to win his release.

A video released Saturday evening appeared to show the 47-year-old freelance journalist being beheaded. Defense Minister Gen Nakatani said it was "highly likely" the images were genuine, the Japan Times reported. Japanese media focused on Prime Minister Shinzo Abe's January 17 statement in Cairo, in which he pledged $200 million worth of humanitarian aid to countries confronting ISIS, as a catalyst for the executions.

The Nikkan Gendai newspaper raised the possibility that the hostage situation arose through a miscommunication around Abe's Cairo announcement. It said that the English version of the Japanese text was mistranslated and no Arabic language text was provided. In a key part of his speech, Abe said: "I will pledge assistance of a total of about $200 million for those countries contending with ISIS to help build their human capacities, infrastructure and so on." The newspaper said that ISIS may have interpreted this as Japan providing military aid.

An initial hostage video released on January 20 featuring Goto and Yukawa showed the two men kneeling in front of a black-clad militant who demanded a $200 million ransom. Addressing Abe, the ISIS militant on the video said: "You have proudly donated $100 million to kill our women and children, to destroy the homes of the Muslims." The Japanese government rushed to stress that the money was non-military in nature. It also provided an Arabic translation of Abe's Cairo speech.

ISIS later dropped its ransom demand and instead insisted on the release of Sajida al-Rishawi, an Iraqi woman awaiting execution in Jordan for terror offenses. In the last few days, most negotiation was handled by the Jordanian government, which seemed to be focused on freeing its own ISIS captive, air force pilot Muath al-Kaseasbah. Jordan vowed Sunday to do all it could to save the pilot. The kingdom "will do everything it can to save the life and secure the release of its pilot," Maaz al-Kassasbeh, who was captured by the jihadists after his plane crashed in Syria in December, government spokesman Mohammed al-Momeni told the official Petra news agency.

During the standoff, the Japanese government was unable to establish direct contact with the militants holding the two hostages, so was never able to explain its position fully. In Saturday night's video, the black-clad executioner, seemingly the same British-accented man who has appeared in previous execution videos, taunted Japan in a one-minute broadcast. "Abe, because of your decision to take part in an unwinnable war, this knife will not only slaughter Kenji but will carry on and also cause carnage wherever your people are found," he said. "Let the nightmare for Japan begin." The man then put his knife to Goto's throat and the video switched to a still image of what appeared to be the journalist's beheaded body.

Speaking to journalists after the release of the video, Abe said: "Japan will not give in to terrorism and will continue to provide humanitarian aid to the Middle East? I will never forgive these terrorists." Goto's mother Junko Ishido said: "I am too upset to find the words to express myself. My son's last act was to go to Syria to help fellow Japanese. So I want people to understand my son's kindness and courage." His older brother Junichi Goto added: "I had hoped to give thanks for his return alive. But, as his brother, this outcome is very regrettable."

The international community including the U.S., Australia and Turkey has strongly condemned the brutality. U.S. President Barack Obama called the killing of a Japanese journalist a 'heinous murder.' Turkish Deputy Prime Minister Yalçın Akdoğan said "We condemn this brutal terrorist act. We send our condolences to the beheaded journalist Goto's family, Japanese government and the Japanese people."