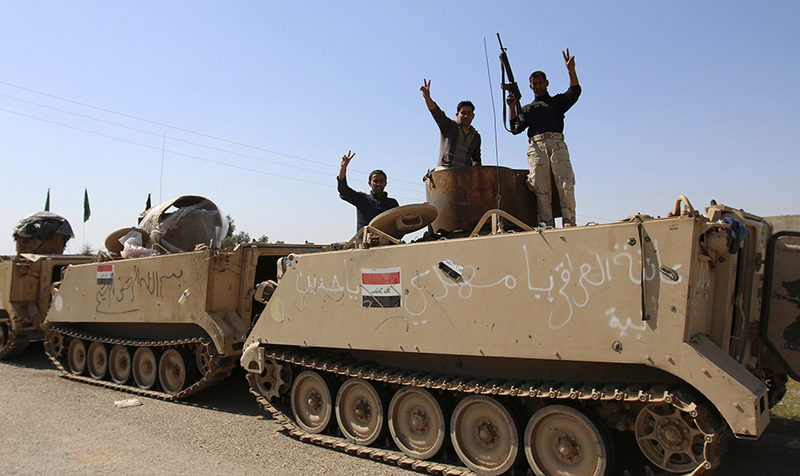 by Mar 01, 2015 12:00 am
Iraq's army and Shi'ite militia have launched a long-awaited offensive against the self-proclaimed Islamic State (ISIS) in Salahuddin province, a stronghold of the terrorists north of Baghdad, Prime Minister Haider al-Abadi said on Sunday.

They also hold other towns on the Tigris river, north of the government-held city of Samarra which Abadi visited on Sunday.

"The prime minister and armed forces chief ... announce the start of the security campaign to liberate Salahuddin," a statement issued by Abadi's office said as he met military leaders in the province, where thousands of troops and militia have gathered for battle.

In comments broadcast on Iraqi television, Abadi said the terrorists would be pushed out of all of Salahuddin and offered their supporters a final opportunity to hand themselves in. "I call upon all those who have been deluded and made mistakes in past to lay down arms today," he said.

"This is their last chance. If they insist on staying on their wrong path they will receive the fair punishment they deserve because they ... stood with terrorism."

Thousands of troops and fighters from Shi'ite militias known as Hashid Shaabi (Popular Mobilisation) have been mobilised for the campaign against ISIS in Salahuddin.

On Saturday residents reported heavy clashes around Samarra after suicide bombers blew themselves up near to security forces in attacks which may have aimed at disrupting the army and militia preparations for the campaign.

Abadi's announcement follows several failed attempts to drive the terrorists out of Tikrit since they swept towards Baghdad last June, adding large parts of north and west Iraq to the swathes of neighbouring Syria already under their control.

Months of U.S.-led air strikes, backed up by the Shi'ite militias, Kurdish peshmerga fighters and Iraqi soldiers have contained ISIS and pushed them back from around Baghdad, the Kurdish north, and the eastern province of Diyala.

But they have held most of their strongholds in Salahuddin and taken new territory in the western province of Anbar. Fighting around al-Baghdadi in Anbar has highlighted the challenge of defeating ISIS terrorists.

A senior U.S. officer said last week 800 Iraqi forces were participating in the battle and appeared set to drive the militants back. His optimistic comments echoed those of Iraq's defence minister.

But nearly two weeks after launching the operation to retake what are little more than a handful of villages on the Euphrates river, five miles from a major military base, Baghdad has yet to declare victory.