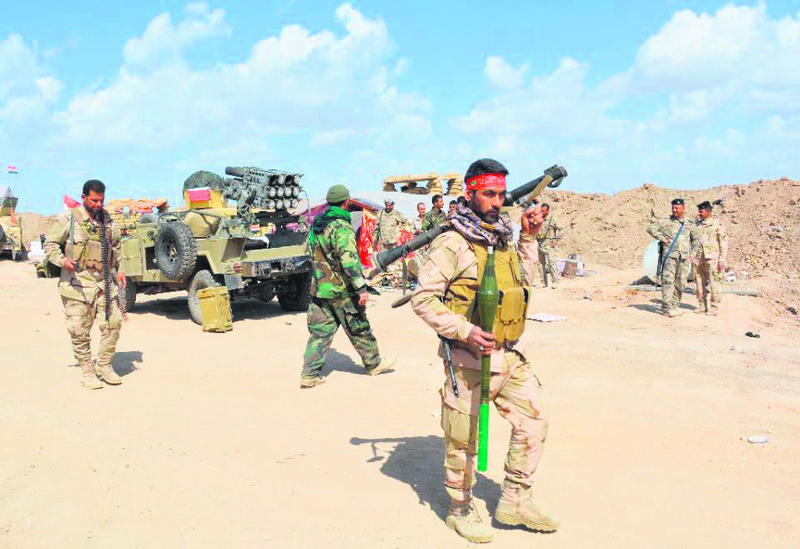 by Daily Sabah with AFP Mar 03, 2015 12:00 am
Executed Iraqi dictator Saddam Hussein's hometown and last bastion, Tikrit has become one of the Islamic State of Iraq and al-Sham's (ISIS) main strongholds. Government forces have been working their way north in recent months, notching up key victories against the militants, who seized Tikrit last June. But the overwhelmingly Sunni Arab city on the Tigris River has resisted them several times and is their toughest target yet. Situated 160 kilometers north of Baghdad, the city is the capital of Salaheddin province. The province is named for the Muslim warlord of the same name who seized Jerusalem in 1187 and whose birthplace was Tikrit. Saddam modelled himself on Salaheddin who is considered to the one of Islam's most brilliant strategists, a reputation he gained during his fight against the Christian crusaders.

An official announcement of the fall of Tikrit signaled the symbolic end of Saddam's regime in the US-led invasion of 2003. The city was the last major one, captured by coalition forces. Saddam's legacy persists with remnants of his Baath party having collaborated with ISIS in attempting to topple the Shiite-dominated government. The city benefited from its loyalty to Saddam and had some of the best hospitals, schools, and roads in Iraq, as well as a university. It also has several presidential palaces and other official buildings.

Iraqi forces along with Shiite militias launched a major assault on Tikrit to recapture the city. Some 30,000 Iraqi troops and militia backed by aircraft pounded militants Government forces have battled their way north for months, notching up key victories against ISIS, but Tikrit has been their toughest target yet, with the militants having resisted them several times. Commanders voiced hope the operation, launched Monday, would be a step towards the recapture of Mosul, the militants' main hub in Iraq although a U.S. envoy leading an international coalition against ISIS said no timeline should be imposed.

"The army, federal police, Popular Mobilization (volunteer) units, and the sons of Salaheddin's tribes are performing the duties of liberation in the largest operation against ISIS since June," said a senior army officer. The operation to retake Tikrit began early Monday after being announced by Prime Minister Haider al-Abadi the previous evening. Military sources said warplanes were involved, but the Pentagon said they excluded those of the U.S.-led coalition fighting ISIS. The U.S. and its allies have received no request from Iraq to carry out air strikes, the Pentagon said. The coalition which has conducted thousands of air strikes against ISIS group to back up Iraqi and Kurdish forces on the ground, is not providing air power for the latest Iraqi offensive, officials said.

Hadi al-Ameri, the Popular Mobilization units' powerful commander, on Saturday urged Tikrit residents to leave their homes within 48 hours so government forces could "wrap up the battle of the revenge for Speicher". Speicher is a military base near Tikrit from which hundreds of new, mostly Shiite, recruits were kidnapped before being murdered execution-style in the early days of the ISIS offensive that swept through much of the Sunni Arab heartland north and west of Baghdad in June. Shiite militias in particular have vowed to avenge the murders, sparking fears of mass killings against Sunnis if Tikrit were to be recaptured. Abadi urged the security forces to spare civilians, a message echoed by the U.N. and responding to the fears of reprisals. He appealed to residents to turn against the militants. ISIS replied with a video showing the execution of four men they said were Sunni Arabs belonging to a tribal group working against the militants near Tikrit. It also released pictures dated Monday that showed militants still manning checkpoints in Tikrit and Al-Alam.
Last Update: Mar 04, 2015 12:09 am
RELATED TOPICS