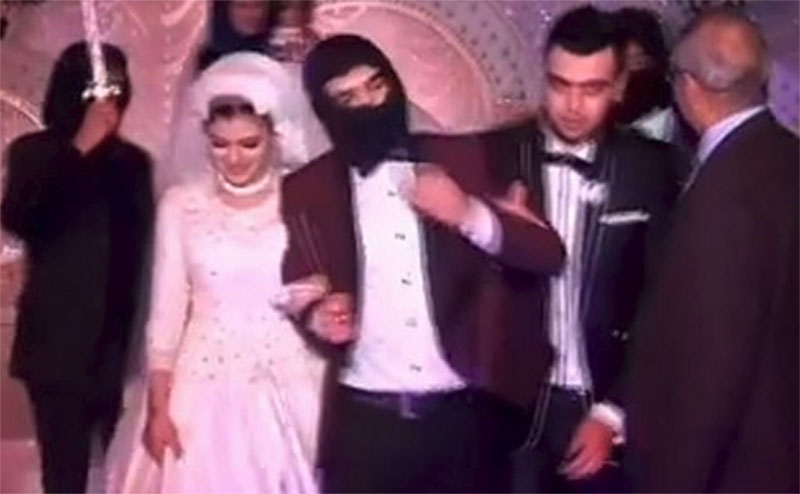 by Anadolu Agency Mar 04, 2015 12:00 am
An Egyptian groom surprised his bride and wedding guests with a dance routine parodying the gruesome hostage-execution videos released recently by the self-proclaimed Islamic State of Iraq and al-Sham (ISIS) militants, sparking controversy after a video of the incident went viral on social media this week.

With balaclavas covering their faces and mock swords in their hands, friends of groom Ahmed Shehata led him and his bride, Shaimaa, into a cage reminiscent of the one that appeared in a recent video purportedly showing ISIS militants burning a captured Jordanian army pilot alive.

In the video, Shehata and his bride can be seen walking towards the cage while the DJ plays an anthem often heard in ISIS's hostage-execution videos.


The bride and groom then enter the cage, the door of which is adorned with a "Congratulations" sign, before the DJ pauses briefly before shifting to a pop song, to which the couple and their friends then begin to dance.

Some hailed Egyptian humor as a means of resisting ISIS's ostensible aim of spreading fear in the region, while others saw the dance as offensive to the sensibilities of the families and friends of the group's victims, including 21 Egyptians whose recent execution in Libya was filmed and released online by the group.

"I am actually happy with this ISIS-style wedding video," Twitter user @MonyAU07 said. "It has a powerful message to the pigs who call themselves ISIS."

And Wafaa Sibae said on Facebook: "Dancing in a cage like the one used to burn [a hostage] to death reflects the disgusting state of indifference and insensitivity our society has reached towards inhumane and immoral acts."

The wedding video, shot in the Nile Delta's Menoufiya province, was the latest example of a social media trend in Egypt mocking ISIS.

In some videos being shared on social-media networks, the anthem featured in ISIS's videos has been reedited to accompany scenes from popular Egyptian comedy films and songs.

Other material includes videos made by social media users themselves. In one such video, a young man masks his face with a balaclava while his friend kneels next to him and confesses to a serious PlayStation addiction-a crime for which he prepares to be beheaded.

In another video, two girls dress up as ISIS militants and hold a knife to a friend's throat while the latter makes a "confession" before the trio begins dancing to the ISIS anthem.

"To Egyptians, sarcasm is a coping mechanism against despair and depression," Mohamed Fahmi, a psychology expert at Egypt's Health Ministry, told The Anadolu Agency.

"To laugh in the face of what would normally bring depression and despair isn't a sign of defeat, but of an unbeatable spirit," he said.