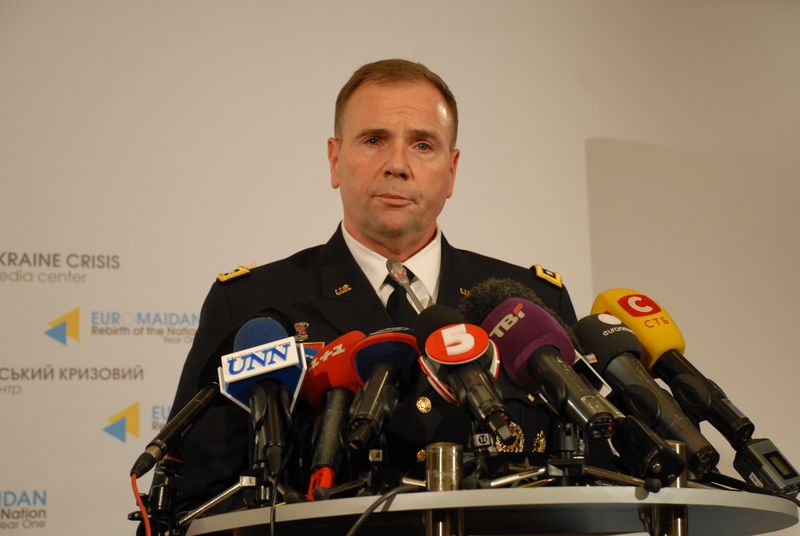 by Anadolu Agency Mar 05, 2015 12:00 am
U.S. Army Europe Commander Ben Hodges praised Turkey's support for the hundreds of thousands of Syrian refugees and expressed regret that the international assistance had been minimal.

"I think right now Turkey is carrying an unfair burden in terms of Syrian refugees. It did not get sufficient help. Well over a million refugees that we know about. That is a concern," Hodges said on Tuesday, in an exclusive interview with The Anadolu Agency.

Hodges said developments in Syria and Iraq posed new security challenges, and renewed NATO's commitment to the security of Turkey.

"When Turkey asked under article 4, for protection from potential Syrian missiles, the U.S., Germany and the Netherlands responded very quickly with the Patriots, and since then Spain has replaced the Netherlands with Patriots. The U.S. and Germany continue to be there. I think that is an important sign of reliability of the alliance, Turkey can count on the alliance," he said.

Speaking on the fight against ISIS, Hodges has urged stronger efforts to cut the financial resources of ISIS and underlined that military strikes alone could be a solution to defeat the group.

"For stopping ISIS, we have to dry up their financial resources," he said.

"They seem to have almost unlimited financial resources, this is coming from somewhere.This has long passed whatever money they stole from banks in Mosul," Hodges stressed.

He said that one important financial source of ISIS has been the sale of oil on the black market.

Hodges argued that some Gulf states were also providing funding to the group, but did not elaborate.

The self-proclaimed Islamic State of Iraq and al-Sham (ISIS) has seized control of vast swathes of Iraq and Syria despite airstrikes conducted by U.S.-led coalition forces since August 2014.

The ISIS massacres and the massive deportation of the local population has sparked international outcry and led to the creation of an international coalition against the group.

"This is not Islam. But when an American or a Western national says it, this is not as compelling as when respected Islamic scholars or officials say it," Hodges said.

He emphasized that only respected Muslim scholars and leaders can effectively counter ISIS propaganda towards young Muslims, with their own messages on the true nature of Islam.