US, HRW warn Iraq of sectarian cleansing in Tikrit 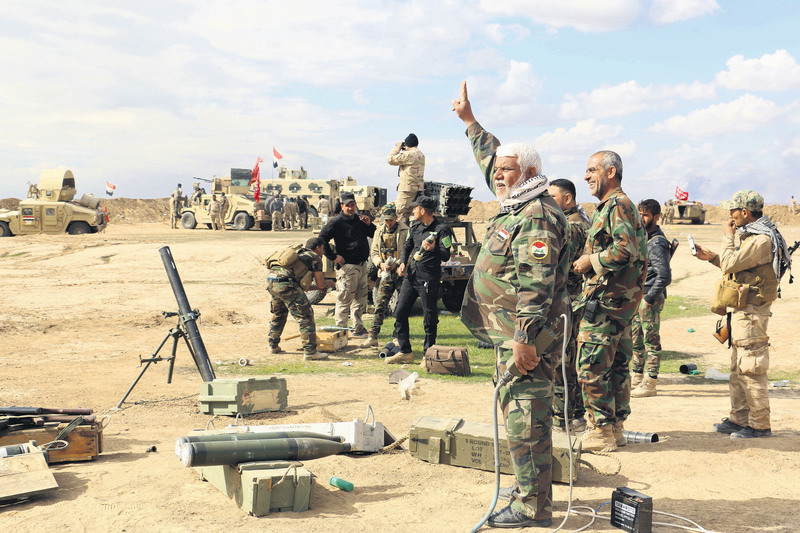 U.S. officials and a press release by the HRW warned Iraqi officials to control Shiite militias whose actions may fuel sectarian conflicts in Tikrit after the city is recaptured from ISIS militants

The U.S. and Human Rights Watch warned an offensive to retake control of the Iraqi city of Tikrit from Islamic State of Iraq and al-Sham (ISIS) must not fuel sectarian tensions. "It is important, Iraqi Prime Minister Haider al-Abadi himself has indicated, that this operation should not be used as an excuse or as cover for individuals taking sectarian-motivated retribution," said White House spokesman Josh Earnest.

"That would tear at the fabric of the country, and weaken the ability of the Iraqis to confront this threat to their country," he added. U.S. forces are not involved in the operation, which is being carried out by an alliance of Iraqi government forces, Shiite militias, volunteer units and Iran. "Iranian forces are also involved," Earnest acknowledged. "We have said from the beginning that the United States will not coordinate militarily with the Iranians."

Human Rights Watch (HRW), which covers human rights violations across the world also warned the Iraqi government of sectarian cleansing in Tikrit as the Shiite militias are known with their brutality against Sunni civilians. "Iraqi forces fighting to recapture the city of Tikrit from ISIS should protect civilians from revenge attacks by pro-government militias. Human Rights Watch has documented numerous atrocities against Sunni civilians by pro-government militias and security forces after they retook other towns," the organization said. Deputy Middle East and North Africa director at Human Rights Watch Joe Stork said "All commanders in Tikrit need to make sure that their forces protect civilians and allow them to flee the combat zone. Past fighting raises grave concerns that Tikrit's civilians are at serious risk from both ISIS and government forces, and both sides need to protect civilians from more sectarian slaughter."

In a report released by HRW last month, it was revealed that Iraqi people are not only suffering from atrocities committed by ISIS militants but also from armed government-backed Shiite militants. The report said the militias work closely with Iraqi government forces. "Abuses by militias allied with Iraqi security forces in Sunni areas have escalated in recent months. Residents have been forced from their homes, kidnapped, and in some cases summarily executed."

At least 3,000 people have fled their homes in the Muqdadiyya area of Diyala province since June 2014 and, since October, been been prevented from returning. In addition to the events documented here, Human Rights Watch is conducting an investigation into more recent allegations that militia and SWAT forces killed 72 civilians in the town of Barwana, also in Muqdadiyya," the report said. The report also underlines that many have been abducted and dozens of families lost contact with their relatives.

In a previous report released on last October by Amnesty International, which covers human rights violations in more than 150 countries it was claimed that the Iraqi government is largely responsible for the attacks on the civilians since the militias target Sunni Iraqis deliberately, as a response to the ISIS attacks, despite there being no concrete evidence that links ISIS and unarmed Sunnis. The report said "In recent months, Shi'a militias have been abducting and killing Sunni civilian men in Baghdad and around the country. These militias, often armed and backed by the government of Iraq, continue to operate with varying degrees of cooperation from government forces – ranging from tacit consent to coordinated, or even joint, operations. For these reasons, Amnesty International holds the government of Iraq largely responsible for the serious human rights abuses, including war crimes, committed by these militias."

The witnesses and relatives of the victims told Amnesty officials the Shiite militias were killing people randomly in response to the ISIS attacks. The killings were more common in the cities that were previously captured by ISIS militants where the Iraqi forces later seized control. The witnesses claim that the country has been dragged into deeper sectarian chaos and that there is no security on the streets. The perpetrators of the killings, abductions and torture were not only the armed militants but also government forces.

Iraqi officials, including al-Abadi have admitted that there was excessive use of force. In a speech to parliament on March 2, al-Abadi said "There is no neutrality in the battle against ISIS. If someone is being neutral with ISIS, then he is one of them." Hadi al-Ameri, former transport minister and leader of the Badr Organization, a leading Shia militia told Tikrit residents over the weekend to flee so that his forces could "wrap up the battle of revenge for Speicher," the local media reported.

Sunni Iraqis are not the only Shiite militias' target as ISIS also kills members of tribes who refuse to ally with the group. ISIS has been escalating violence in the region by targeting Shiites and Christians in Iraq and Western-backed opposition groups in Syria and Iraq. Although the group's targets are generally Shiites, who the militants consider as heretics, Sunni tribes also suffer from atrocities and arbitrary killings. Sunni tribes, who refuse to ally with ISIS in its bloody war with the central Iraqi government, the Kurdish Regional Government (KRG) and U.S.-led anti-ISIS coalition, have become the enemies of the group. HRW reported last December that ISIS abuses the human rights of Sunni civilians, including arbitrary arrests and detentions. For instance, last November ISIS executed dozens of Sunni Albu Nimr tribe's members as the tribe opposed ISIS's control over Iraqi cities and helped the U.S. Marines defeat al-Qaida in Iraq's vast Western Anbar province during the 2006-2007 "surge" offensive.

Besides the mass executions, an Iraqi parliamentary body said on Wednesday that ISIS is using civilians as human shields and preventing them from leaving areas under its control in Iraq's northern Saladin province. According to a statement of the Iraqi High Commission for Human Rights, Daesh was hunting down civilians attempting to flee their homes in Saladin. The trapped civilians in the area were now being used as human shields. Fadel al-Gharawi said "ISIS gangs are committing new violations and severe crimes against civilians in Saladin province, especially women and children. ISIS has also blocked humanitarian aid to civilians, killed many of them and buried them in mass graves apart from seizing their properties."
Last Update: Mar 06, 2015 9:46 am
RELATED TOPICS