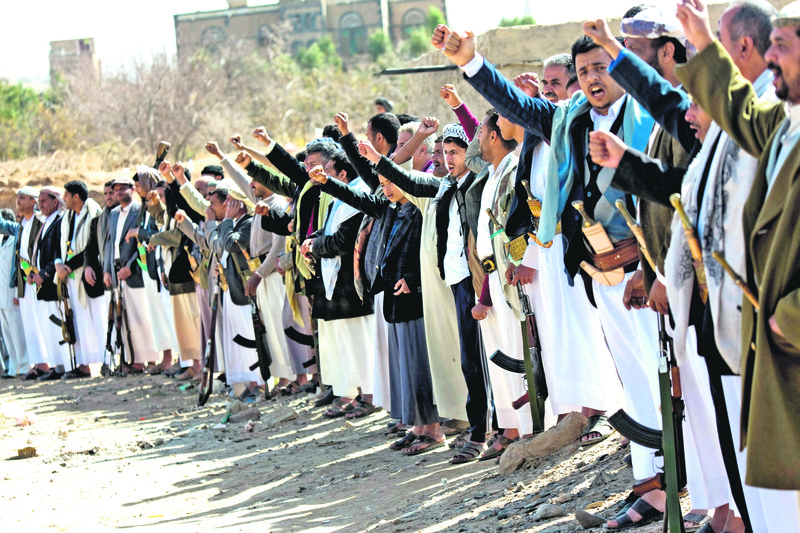 Yemen's political crisis took yet another dramatic turn with more than half of Yemen's population in dire need of humanitarian assistance. The number will climb higher if the instability prevails, the U.N. says

Yemen, the poorest country in the Middle East, hit by political instability and intermittent violence, is now facing a major humanitarian crisis, with 15.9 million people in the country in dire need of humanitarian assistance, according to the United Nation's Office for Coordination of Humanitarian Affairs (OCHA) figures. The humanitarian situation has become worse than ever with the long absence of political authority in the country; The Houthi rebels have consolidated their grip on power, anti-coup protests have escalated and the country is being dragged into a perpetual state of turmoil. The incumbent government – which has lost de-facto control - has not been able to deliver humanitarian needs to the people. According to U.N. reports, 13.4 million people have no access to safe water and sanitation and 8.4 million of the population have no access to adequate health care.

Yemen has the third highest malnutrition rate in the world, as over 10 million Yemenis are experiencing food shortages. As the political conditions in the country have steadily worsened, the food security situation has severely deteriorated. Yemeni children have become the most vulnerable due to continuing violence in the country. The number of acutely malnourished has hit 840,000.

The Yemeni people's vulnerability is exacerbated due to "long-standing underdevelopment, poor governance, environmental stress, demographic pressure and continued political instability." As millions of Yemenis' lives are put at ever greater risks, the cuts in funding of international humanitarian organizations that are actively working in Yemen lead to more human suffering. "Despite millions of lives at risk, donors are cutting funding at this critical time" says Regional Director of Norwegian Refugee Council (NRC), Gabriella Waaijman. According to OCHA, the requested amount of funds is $748.1 million in order to provide humanitarian assistance to those in dire need of help. However, both the U.N. and the Norwegian Refugee Council report that they are suffering from an insufficient amount of funds.

Amid political turmoil, Yemen is also suffering from a growing refugee crisis, as it hosts over one million refugees and migrants mostly from the conflict-hit areas in Eritrea and Somalia. Deepening insecurity and violence have contributed to the internal displacement of many Yemenis. According to U.N. figures, some 335,000 people have been internally displaced. "Internally displaced people, refugees and migrants are among the most vulnerable people in Yemen, but the number affected by the humanitarian crisis goes far beyond these groups. With the impact of the current situation on the economy, many more people will lose their livelihoods," says Waaijman.

As the localized clashes have been continuing in conflict-hit areas in the country, the civilian death toll is rising due to attacks on residential areas. During deadly attacks by al-Qaida in the Arabian Peninsula (AQAP) since December 2014, around 100 civilians have been killed, reflecting a serious violation of international human rights. The U.S. army's practice of targeted killings and the use of armed drones in Yemen has also cost many civilians' lives, and the U.S. forces' compliance with President Barack Obama's targeted killing policy was condemned by Human Rights Watch in a report on Feb. 2014 over a deadly U.S. drone strike on a December 2013 wedding procession, which left 13 people dead with 15 injured. Under the U.S. counter-terror operation in Yemen, U.S. attempts to kill militants resulted in the deaths of many innocent lives - an estimated 1,147 people.

Yemen is of crucial importance for the U.S., as the country is home to one of their worst enemies, al-Qaida's deadliest franchise, the AQAP, which has orchestrated numerous high-profile terrorist attacks, including claiming responsibility for the Jan. 7 Charlie Hebdo massacre in Paris. Since 2002, the U.S. has been conducting counterterror strikes and operations against radical militants as part of U.S. national security policy. During the Obama administration, there have been 15 air strikes and 107 drone strikes in Yemen as part of a "targeted-killing policy." The the practices of the Obama administration raise serious laws-of-war concerns regarding the human cost of U.S security policy in Yemen.

Additionally, Yemen plays a significant role for Saudi Arabia against Iran's influence over the violence-hit Middle East region. The advance of the Iranian-allied Shi'ite Houthi group raises fears of the possible disintegration of the country. The capital Sanaa has been under Houthi rebel control since September last year. The country has been facing severe political instability after the takeover of the presidential palace by Houthi militants, prompted President Abd Rabbuh Mansour Hadi to tender his resignation. The Yemeni President Hadi fled to the southern port city of Aden, where he has re-established his presidency. As the country has been dragged into a civil war, the U.N. has started to hold mediated peace talks between Houthis and Hadi's government in a bid to bring peace and stability back to the country.
Last Update: Mar 07, 2015 1:17 am
RELATED TOPICS