Lieberman hints at killing Palestinians as response to PA 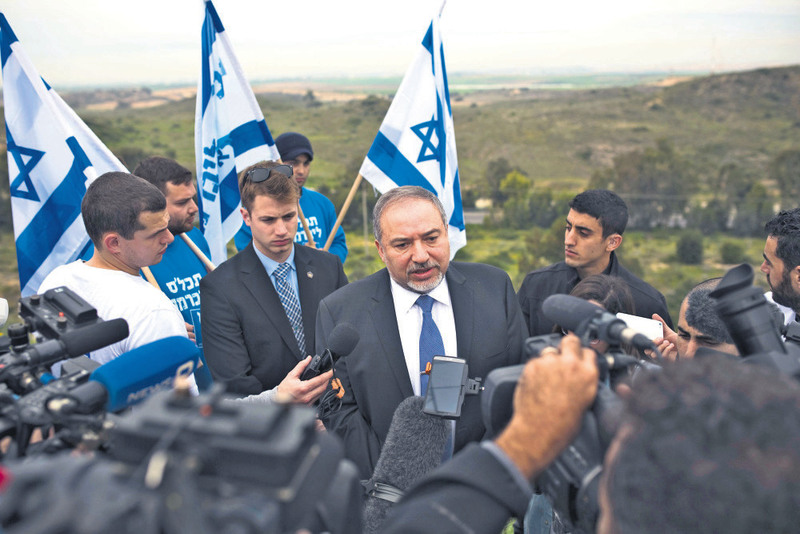 Some of the biggest media outlets around the world, including The New York Times, BBC and Associated Press, have chosen to ignore Israel's acting Foreign Minister Lieberman's comments that Israel's ‘disloyal' Arab citizens should be beheaded

Israeli Foreign Minister and Beiteinu Party head Avigdor Lieberman made controversial statements on Sunday in which he threatened to cut Israel's Arab citizens' heads off with an axe. The Palestinian Authority responded to the statements by saying that the government will appeal to the International Criminal Court (ICC). However, Lieberman was unfazed by the Palestinian Authority's threat to take him to the ICC, and his response was harsher, as he said he would answer the ICC appeal when he becomes defense minister after the upcoming elections. Certain media outlets, including Associated Press, the BBC, the Guardian, CNN and many others preferred not to mention Lieberman's statements or chose to ignore it for days until they were seriously criticized. The New York Times only published Reuters' sole article on the matter five days after the comments were aired. "Those who are with us deserve everything, but those who are against us deserve to have their heads chopped off with an axe," Lieberman said during an election rally in the western city of Herzliya on Sunday.

During Sunday's rally, Lieberman said those who raised the black flag of what is called "Nakba Day" in mourning over the establishment of Israel, do not deserve to belong to the state of Israel. "I am quite willing to donate them [the people who raise the black flags] to Palestinian Authority chief Mahmoud Abbas," Lieberman said. "It would be my pleasure," he added. He called for including Arab states and Israel's Arab citizens in any settlement with Palestinians. Lieberman said Israel should seize the opportunity of the presence of similar points of view within Arab states, but without mentioning what these points of view were. He said there could not be a bilateral settlement of the Palestinian-Israeli conflict, calling for a regional settlement that included Arab states and Israel's Arab citizens. "The Palestinians know what is being said about them now in the Arab world," Lieberman said. He added that some Arab states believe that the real threat comes from the Palestinian faction Hamas and the militant group Islamic State of Iraq and al-Sham (ISIS), and not from Israel.

The Palestinian government slammed Lieberman and said his assertions made him no different from ISIS. "We urge the Israeli government – and all nations – to arrest ISIS member Lieberman and boycott him for the threat he poses against humanity and its values," the Palestinian Foreign Ministry said in a statement. The ministry went on to urge the international community to denounce Lieberman's remarks and help protect the Palestinian people from "the mounting fascism of the Israeli community." The statement said that "Lieberman's remarks were very dangerous" and added that the "smugness of the killer Lieberman would surely be one of the cases brought before the International Criminal Court so that he stands trial for his crimes."

Apparently, Lieberman is not afraid of the ICC, as he wrote on his Facebook page: "I saw the Palestinian Authority will go to the International Criminal Court in the Haag over my remarks that we must act forcefully against our enemies and those who act against the State of Israel. They will get an answer to that from me as defense minister."

Raja Zaatry, spokesman of the Arab Joint List, said: "Where did ISIS learn these crimes? Look what the Zionist movement did in 1948. Rapes, pillaging, murders, massacres, committed here in these parts as well." Lieberman said he would act to revoke Zaatry's citizenship after the elections.

Israeli former ambassador to South Africa and former Foreign Ministry Director-General Alon Liel and Israeli former ambassador to France Daniel Shek were shocked by Lieberman's statements. Shek said: "It's shocking that the foreign minister spoke in a blatantly racist way against 20 percent of the citizens of the country he is supposed to represent." An Israeli-Arab member of the Knesset, Ahmed Tibi, called Lieberman the "Jewish Islamic State," referring to ISIS.

Israeli politicians have started toughening their rhetoric against Palestinians and the conflict, as the country will hold elections on March 17. Despite his struggle to win an adequate number of seats in the Knesset to gain a ministerial position, polls indicate that Lieberman's Yisrael Beitenu will win no more than five seats in the 120-member Knesset. Lieberman is known for his aggressive policies toward Palestinians, as he supports attacking Gaza to overthrow the Hamas administration.

Israeli Foreign Minister and the head of Yisrael Beiteinu Party Avigdor Lieberman was born in 1958 in Moldova and immigrated to Israel in 1978. He holds a BA in Political Science and International Relations from Hebrew University of Jerusalem. In webpage of Israel Minister of Foreign Affairs, Lieberman's political past it is said that "First elected to the Knesset in 1999, he has served as a member of the Foreign Affairs & Defense Committee and State Control Committees, and as Chairman of the Israel-Moldova Parliamentary Friendship League. In March 2001, Liberman was appointed Minister of National Infrastructures. He resigned his post in March 2002. He served as Minister of Transportation from February 2003 until June 2004. He served as Deputy Prime Minister and Minister of Strategic Affairs from October 2006 until his resignation in January 2008. In March 2009, Avigdor Liberman was appointed Deputy Prime Minister and Minister of Foreign Affairs. He resigned his post in December 2012. Re-elected to the Knesset, he served as Chairman of the Knesset Foreign Affairs and Defense Committee until his reappointment as Minister of Foreign Affairs in November 2013." According to Reuters, Lieberman is not expected to gain success in the upcoming elections. "Lieberman's party is going it alone this time. Polls predict it will win only five or six seats as his support base, immigrants from the former Soviet Union, integrate more into Israeli society and turn to other parties. His controversial policies include imposing a loyalty oath on Israel's Arab minority and trading Israeli-Arab towns to any future Palestinian state for territory in the occupied West Bank where Jewish settlements have been built," Reuters reported.
Last Update: Mar 12, 2015 10:08 am
RELATED TOPICS