Satellite imagery shows devastation of Syria on a national scale 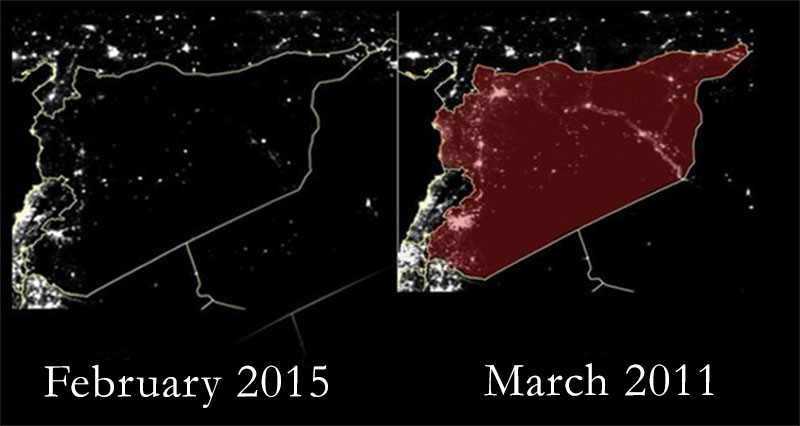 Much of Syria is regularly plunged into debilitating darkness, experts said Wednesday, highlighting the scale of the war's devastation as the conflict enters its fifth year.

Analyzing satellite images, scientists from Wuhan University in China found that since March 2011, when the war broke out, "the number of lights visible over Syria at night has fallen by 83 percent," a coalition of 130 non-governmental organizations said in a statement.

The divided and devastated city of Aleppo, once Syria's main commercial hub, has been the worst hit with 97 percent of night lights extinguished in the past four years.

Syrian President Bashar al-Assad's use of barrel bombs against his own people, in a war which has now claimed more than 200,000 lives, "rolls back centuries of human peacekeeping and the history of war," Miliband told reporters on a conference call.

Chinese scientist Xi Li, who led the research, said "the night light data never tells lies" -- but admitted that even he had been shocked at their findings.

"Satellite imagery is the most objective source of data showing the devastation of Syria on a national scale," he said.

"Taken from 500 miles above the Earth, these images help us understand the suffering and fear experienced by ordinary Syrians every day as their country is destroyed around them."

The exceptions were the provinces of Damascus and Quneitra, near the Israeli border, where the decline in light has been 35 percent and 47 percent respectively.

Former U.S. secretary of state Madeleine Albright called for a stepped-up commitment from the international community to bring about an end to the war, saying that Assad was "making a mockery" of U.N. resolutions.

"What is happening on the ground in Syria is a human rights and humanitarian catastrophe of the first order," Albright said, adding that the "scale of human suffering in Syria has become almost impossible to comprehend."