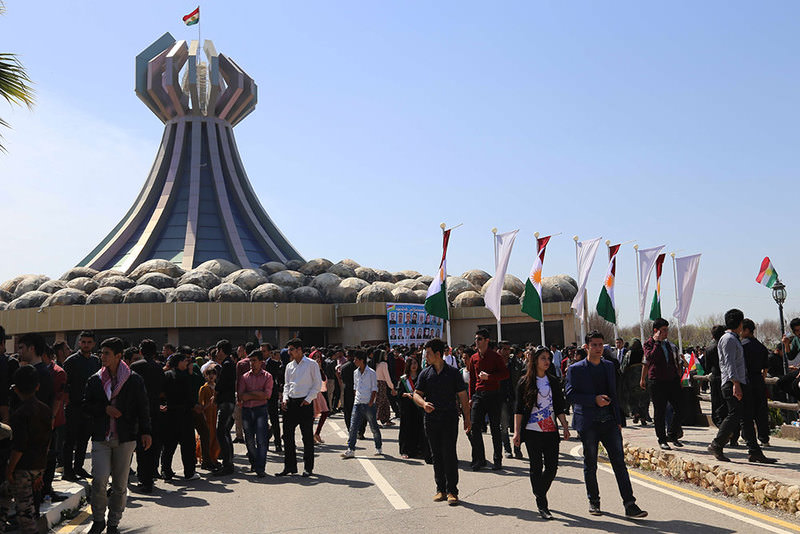 Ceremonies were held in Northern Iraq and Martyrs Monument of Halabja to commemorate 27th anniversary of chemical attack | Photo: AA
by Daily Sabah with AP Mar 16, 2015 12:00 am
As the world remembers the horrors of chemical attack carried out 27 years ago to the northwestern Iraqi town of Halabja, Kurdish forces in Iraq are investigating two other possible chemical weapons attacks by the self-proclaimed Islamic State of Iraq and Sham group, a top official said Monday, as authorities put an Iraqi offensive to retake Saddam Hussein's hometown on hold.

The two purported chemical weapon attacks resemble one claimed Saturday by Kurdish officials who say an independent laboratory concluded the militants used chlorine gas against its peshmerga forces in a January 23 truck suicide attack. However, their claims were not immediately verified by international authorities.

Iraqi officials and Kurds fighting in Syria have made similar allegations about the militants using the low-grade chemical weapons against them. The ISIS group, which controls a third of Syria and Iraq in its self-declared caliphate, has not commented on the claims.

The Kurdish claims also come on the 27th anniversary of the 1988 Halabja massacre, which saw brutal Saddam regime's use chemical weapons on the Kurdish village, killing an estimated 5,000 people and inflicting painful injuries on thousands in the years to come.

The massacre was part of the larger Al-Anfal campaign, in which Baathist Iraq sought to punish insurgent Kurdish groups along with terrorizing local Kurds, Turkmens, Assyrians and other minorities. Revenge for the unfruitful eight-year-long Iran-Iraq War, initiated by the West-backed Saddam regime, which caused a heavy burden in both countries, was taken on the Kurds. During the campaign, more than 100,000 civilians were murdered, hundreds of settlements were wiped out and chemical weapons were used. Both Saddam Hussein, and his cousin Ali Hassan al-Majid, infamously known as 'Chemical Ali', were tried and sentenced to death for their crimes in the campaign. 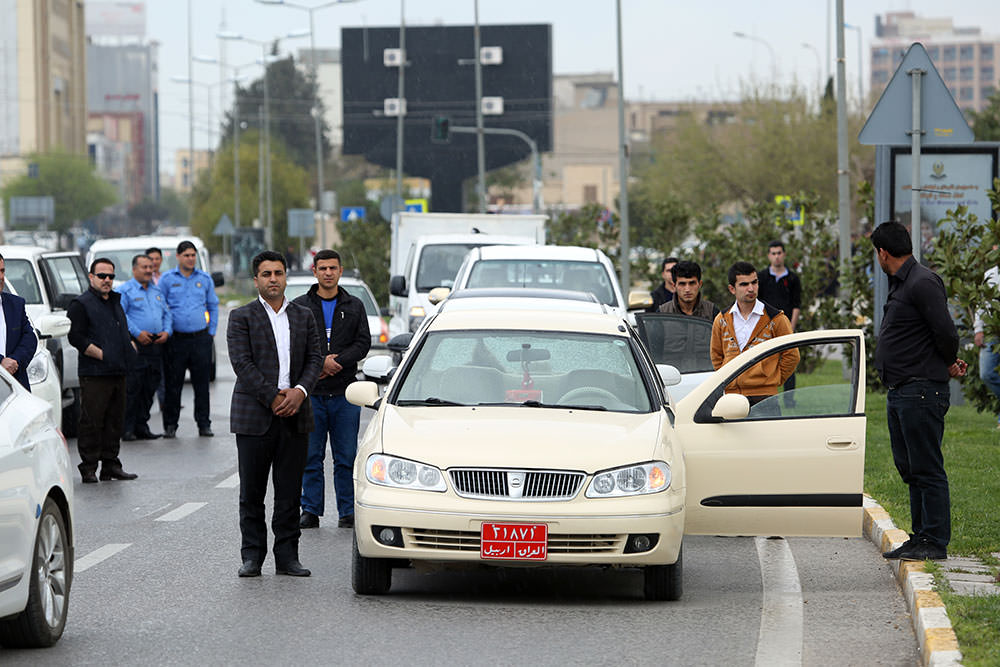 Iraqi Kurds observe a minute of silence on March 16 in Irbil, the capital of the Kurdish Regional Government in Northern Iraq | Photo: AFP

General Aziz Wesi, in charge of a Kurdish special forces brigade, told journalists on Monday that authorities had declined to immediately discuss the two newly announced attacks when they happened on December 26 and January 28 out of fears of causing a panic.

Kurdish officials have offered footage of the aftermath of the December 26 attack, which shows men coughing and pouring water over their heads after another suicide truck bombing that authorities say wounded some 60 men.

"I put a wet scarf on my face because when I saw the gas, I felt it," said Captain Mohammad Sewdin, who leads the Kurdish special forces unit targeted in the December attack. "I was afraid it might be something like [chemical weapons]. So I told my men to do the same."

Sewdin told The Associated Press he was temporarily blinded for six hours after the attack and coughed up blood. He and others were hospitalized.

There has been no independent confirmation of any of the Kurds' claim. Peter Sawczak, a spokesman for the Organization for the Prohibition of Chemical Weapons, which has monitored Syria dismantling its chemical weapons stockpile, said on Saturday that his group had not been asked to investigate the January 23 attack. He did not immediately respond to a request for comment on Monday about the newly claimed attacks.

Chlorine, an industrial chemical, was first introduced as a chemical weapon at Ypres in World War I with disastrous effects as gas masks were not widely available at the time. While chlorine has many industrial and public uses, as a weapon it chokes victims to death. Most nations banned its use in war in the Geneva Protocol of 1925.

In the Syrian civil war, a chlorine gas attack on the outskirts of Damascus in 2013 killed hundreds and nearly drove the U.S. to launch airstrikes against the government of embattled President Bashar Assad. The U.S. and Western allies accused Assad's government of being responsible for that attack, while Damascus blamed rebels.

There have been several allegations that the ISIS group has used chlorine previously. In October, Iraqi officials claimed ISIS militants may have used chlorine-filled cylinders during clashes in late September in the towns of Balad and Duluiya. Their disclosures came as reports from the Syrian border town of Kobani indicated that the extremist group added chlorine to an arsenal that already includes heavy weapons and tanks looted from captured military bases.

Insurgents have used chlorine gas in Iraq before. In May 2007, suicide bombers driving chlorine tankers struck three cities in Anbar province, killing two police officers and forcing about 350 Iraqi civilians and six U.S. troops to seek treatment for gas exposure. Those bombers belonged to al-Qaida in Iraq, which later became the ISIS group.

Meanwhile on Monday, Iraqi Interior Minister Mohammed Salem al-Ghabban said the offensive to retake the ISIS-held city of Tikrit will be on hold until civilians in Saddam Hussein's hometown can flee and roadside bombs can be cleared.

Speaking to reporters from the nearby city of Samarra, he said ISIS militants had booby-trapped roads and buildings leading into Tikrit, slowing the Iraqi forces, aided by Iranian advisers.

"The militants are squeezed into a small part of the city center," al-Ghabban said.

He offered no timeframe for the advance to resume, saying that is being "left to the field commanders." So far, the campaign is not being aided by U.S.-led airstrikes, which continue elsewhere in Iraq and Syria.

Tikrit, the capital of Salahuddin province, lies about 130 kilometers (80 miles) north of Baghdad. It is one of the largest cities held by ISIS militants and lies on the road connecting Baghdad to Mosul. Retaking it will help Iraqi forces have a major supply link for any future operation to retake Mosul.

U.S. military officials have that said a coordinated military mission to retake Mosul likely will begin in April or May and involve up to 25,000 Iraqi troops. But the Americans have cautioned that if the Iraqis are not ready, the offensive could be delayed.