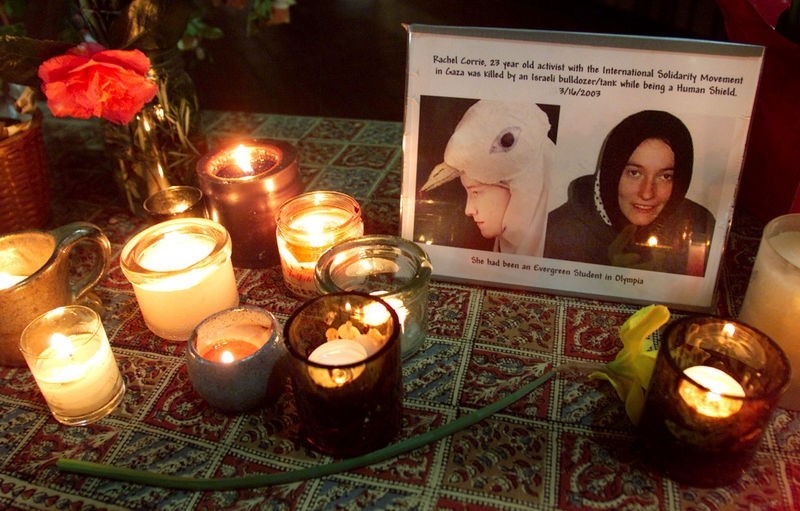 by Zeyneb Varol Mar 16, 2015 12:00 am
It has been twelve years since American activist Rachel Corrie was crushed to death by an Israeli bulldozer in Gaza while she was protesting the demolition of a Palestinian home on March 16, 2003.

Corrie pleaded with Israeli soldiers for two hours not to destroy the home, and took it as self-evident that no Israeli soldier or bulldozer driver would dare kill the citizen of a country which Israel describes as its closest ally.

However, being a U.S. citizen or a nonviolent activist did not save her from being killed by an Israeli military bulldozer, which was made in the U.S. and paid for by the American government as part of its aid to Israel.

An army investigation concluded that she was partially hidden behind a dirt mound and ruled her death an accident. The driver said he didn't see Corrie. Neither the driver nor his commander were charged or tried and no one has been punished for her death. Even though the statements of numerous eyewitnesses and photographic documentation proved that she was killed intentionally.

Tom Dale, an eyewitness, said that "The driver knew absolutely she was there. The bulldozer waited for a few seconds over her body and it then reversed, leaving its scoop down so that if she had been under the bulldozer, it would have crushed her a second time. Only later when it was much more clear of her body did it raise its scoop."

Another eyewitness Gregory S. Schnabel said in his affidavit, "The bulldozer approached Rachel from a distance of 10 to 15 meters away. Rachel was clearly visible and was wearing her orange florescent jacket. As the bulldozer advanced Rachel signaled to the bulldozer driver by waving her arms. She was standing in a wide open area. "

"As the bulldozer came extremely close to Rachel it began to push the dirt from underneath her feet and around her ankles. The driver had clear sight of Rachel until the machine he was driving knocked her over. The bulldozer continued, driving over her entire body from feet to head until Rachel was directly underneath the center of the bulldozer. The bulldozer paused for a moment. It then reversed and drove back over her with its blade still down."

"After the bulldozer pushed Rachel over the driver continued to advance for a minimum of five meters more. During this time there was no place where Rachel could possibly have been except for underneath the bulldozer. For this reason I believe that this was clearly an intentional action by the bulldozer driver." Schnabel said.

Corrie's death came during a spike in Israeli home demolitions in the Gaza Strip. According to Human Rights Watch, between September 2000 and 2004, more than 2,500 homes in Gaza, including 1,600 in Rafah alone, were destroyed.

Following her death, Corrie and her fight for the Palestinian cause became a symbol of freedom and sacrifice. In 2010, one of the vessels of 'Gaza Freedom Flotilla' carrying humanitarian aid, with the intention of breaking the blockade of the Gaza Strip, was named in honour of Corrie. In 2011, Iran named a street in Tehran after Corrie.

One of the last photographs of Rachel Corrie shows a blonde woman staring pensively into the distance, her pen poised above her notebook, a gray scarf around her neck. It's often turned into a graffiti painting on walls in Gaza.
Last Update: Dec 14, 2017 1:09 pm
RELATED TOPICS