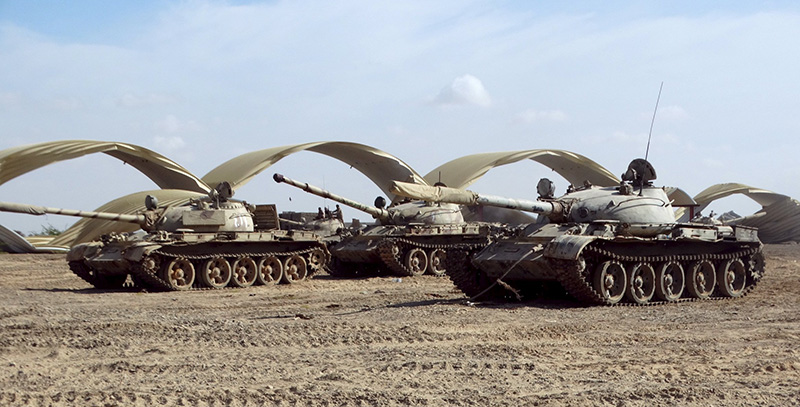 Iran-backed Shiite Houthi rebels captured a key air base to increasepressure over the Gulf-backed president. Residents claimed that unidentified war planes fired missiles at a neighborhood close to president’s compound

Shiite Houthi forces have offered a 20-million-Yemeni-riyal bounty (roughly $93,000) for the arrest of President Abd Rabbuh Mansour Hadi on Wednesday, as they have captured the key Al-Anad airbase and the entire city of Al-Hawtah in the southern province of Lahij in Yemen, which is some 40 kilometers north of President Hadi's refuge Aden.

US forces were evacuated from the country's key airbase on Friday due to security concerns.

After seizing Al-Anad, anti-Hadi forces advanced farther south and reached just three kilometres away from Huta, the capital of Lahj province, which is adjacent to Aden, the military official said.

The Houthis, backed by troops allied to former strongman Ali Abdullah Saleh, clashed with forces loyal to Hadi in at least two southern provinces as they push towards Aden.

Keeping pushing towards Aden, the Houthi militia seized the airport and a nearby military base Sunday in Taez, 180 kilometres (110 miles) north of Aden, which is seen as a strategic entry point to Hadi's southern stronghold.

Meanwhile, Yemen's Aden airport has been closed and all flights have been cancelled due to security concerns.

Yemen has remained in a state of chaos since last September, when the Houthis took over Sanaa, from which they have since sought to extend their control to other parts of the country.

Late last month, President Abd Rabbuh Mansour Hadi fled Sanaa - where he had remained under house arrest by the Houthis for weeks - to Aden.

Yemen's slide towards civil war has made the country a crucial front in mostly Sunni Saudi Arabia's rivalry with Shi'ite Iran, which Riyadh accuses of stirring up sectarian strife through its support for the Houthis. Sunni Arab monarchies around Yemen have condemned the Shi'ite Houthi takeover as a coup and have mooted a military intervention in favor of Hadi in recent days. U.S. officials say Saudi Arabia is moving heavy military equipment including artillery to areas near its border with Yemen, raising the risk that the Middle East's top oil power will be drawn into the worsening Yemeni conflict.

While Hadi has vowed to check the Houthi push south and called for Arab military support, his reversals have multiplied since heavy fighting first broke out in south Yemen on Thursday and the Houthis began making rapid advances southward. In Houta, storefronts were shuttered and residents reported hearing bursts of machine gun fire and the bodies of fighters from both sides lying in the streets. Eyewitnesses said Houthi fighters and allied soldiers largely bypassed the city center and travelled by dirt roads to the southern suburbs facing Aden. While the battle is publicly being waged by the Houthi movement, many in Aden believe that the real instigator of the campaign is former president Ali Abdullah Saleh, a fierce critic of Hadi. It was Saleh who was the author of Aden's previous humiliation in 1994, when as president he crushed a southern secessionist uprising in a short but brutal war. Unlike other regional leaders deposed in the Arab Spring, Saleh was allowed to remain in the country. Army officers loyal to former president Ali Abdullah Saleh, an ally of Yemen's Houthi group, expressed "utter rejection" of any foreign intervention to end the country's conflict, according to a statement carried on a website affiliated to Saleh as Hadi and Yemen foreign minister asked the Gulf to intervene militarily to stop Houthis' advance. "We express our total and utter rejection of any external interference in Yemeni affairs under any pretext and in any form and from any side," the so-called Higher Committee to Preserve the Armed Forces and Security said. Yemen plays a significant role for Saudi Arabia against Iran's influence over the violence-hit Middle East region. The advance of the Iranian-allied Shi'ite Houthi group raises fears of the possible disintegration of the country. The capital Sanaa has been under Houthi rebel control since September last year. The country has been facing severe political instability after the takeover of the presidential palace by Houthi militants, prompted President Abd Rabbuh Mansour Hadi to tender his resignation. The Yemeni President Hadi fled to the southern port city of Aden, where he has re-established his presidency. As the country has been dragged into a civil war, the U.N. has started to hold mediated peace talks between Houthis and Hadi's government in a bid to bring peace and stability back to the country.

Yemen is also of crucial importance for the U.S., as the country is home to one of their worst enemies, al-Qaida's deadliest franchise, the AQAP, which has orchestrated numerous high-profile terrorist attacks, including claiming responsibility for the Jan. 7 Charlie Hebdo massacre in Paris. Since 2002, the U.S. has been conducting counterterror strikes and operations against radical militants as part of U.S. national security policy. During the Obama administration, there have been 15 air strikes and 107 drone strikes in Yemen as part of a "targeted-killing policy." The the practices of the Obama administration raise serious laws-of-war concerns regarding the human cost of U.S security policy in Yemen.