Armenians optimistic ahead of Turkish elections 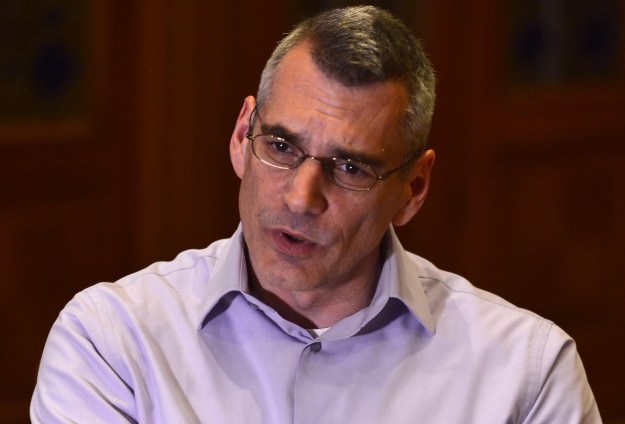 American-born Armenian political analyst Richard Giragosian |Photo: AA
by Anadolu Agency Mar 28, 2015 12:00 am
Despite upcoming sensitive anniversaries and a Turkish general election, observers are claiming they are "optimistic" that Turkey and Armenia could mend links in the near future.

Armenian experts talking to The Anadolu Agency believe the two historically hostile countries could start a new phase after 2015.

This year marks the centenary of mass deportations of Armenians from Anatolia during the First World War.

"In many ways I remain optimistic but in terms of a refined schedule of 2016 and 2017," says American-born Armenian political analyst, Richard Giragosian.

Over recent months the Turkish and Armenian presidents have exchanged angry words over the planned Gallipoli (Gelibolu) commemoration events.

The ceremonies in April will mark Turkey's historical feat of arms but they also fall on the 100th anniversary of the 1915 forced relocation of Armenians from Turkish soil, which the Armenian diaspora and government describe as "genocide."

If April 25 is a testing time for Turkish-Armenian relations, June 8 - the day after Turkey's general election - could prove to be another delicate moment, according to Giragosian, who is director of the Yerevan-based Regional Studies Center.

The Turkish election is an "opportunity" for greater "self-confidence" in Ankara within the Turkish government which could prompt a return to normalization and diplomatic engagement with Armenia, says Giragosian.

Vahram Ter-Matevosyan, a political scientist at the American University of Armenia, agrees: "It is a good period because they [Turkey] don't have elections after June." Like Turkey, Armenia will not face elections until 2018.

According to Matevosyan, the opening of the border between Turkey and Armenia, closed for more than 20 years since the beginning of the Karabakh conflict, also depends on the outcome of the polls.

However, he believes Turkish-Armenian relations will not be at the top of Turkish President Recep Tayyip Erdogan's post-election agenda.

The stalled 2009 Zurich protocols between Turkey and Armenia proposed opening the border as well as mending diplomatic relations.

According to Matevosyan, to have an open border means cooperation: "Armenia would have the opportunity to reach Mediterranean ports."

He says that Tbilisi currently has a monopoly on Armenia's foreign trade as 70 percent of it has to pass through neighboring Georgia.

The owner of Armenian textile company TOSP, Suren Berkirski, tells AA that 70 percent of his raw materials come from Turkey via Georgia, something which raises transportation costs for his business.

Although official ties remain frozen between Turkey and Armenia there remains an ongoing trade connection between the two countries.

In January alone Turkey did not supply exports to Armenia but officially imported $59,000-worth of trade from Armenia, according to the Turkish Statistical Institute.

"With a Gross Domestic Product of $786 billion, Turkey is the 18th largest economy in the world," according to the World Bank: "With an estimated per-capita GDP of US$3,830, Armenia is a lower middle-income country."

Giragosian notes that the opening of the border hypothetically is very important in terms of creating economic and trade opportunities and allowing much greater interaction beyond the current two weekly direct flights between Istanbul and Yerevan.

According to Matevosyan, there is now a completely different situation on official relations between Ankara and Yerevan: "The mutual misconception and mutual misunderstanding is higher than in 2009."

"What we have now is full of problems and only a few solutions hanging in the air," he says.

Giragosian, on the other hand, believes that "the entire effort of normalization was never supposed to be easy."

Director of the Yerevan-based Caucasus Institute, Alexander Iskandaryan, is optimistic too.

"We did not open the physical borders but we are opening mental borders," Iskandaryan says, referring to ongoing civil society interaction between the two nations.

According to Iskandaryan, Turkey is changing and democratizing: "Generally you can speak more openly in Turkey and this affects Armenians as well."

As Armenian President Serzh Sargsyan said last week that the 2009 protocols being withdrawn from the Armenian parliament does not mean that future reconciliation with Turkey was now closed.

Matevosyan believes the text of the next protocols should be very simple: "Armenia and Turkey are here to establish diplomatic relations."
Last Update: Mar 29, 2015 11:21 am
RELATED TOPICS