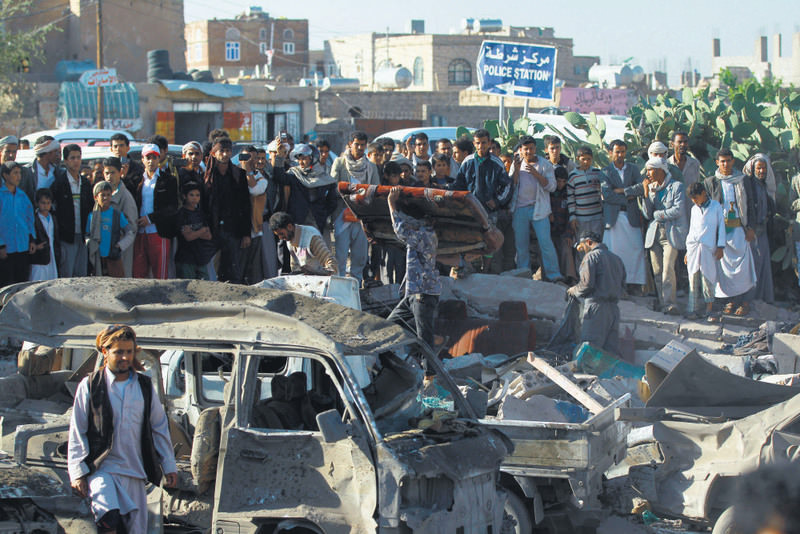 Saudi Arabia has been hitting the Iran-backed Houthis' strongholds.
by Yusuf Selman İnanç Mar 28, 2015 12:00 am

Saudi Arabia, along with the support of several countries, launched a military operation against the Iran-backed Houthis and Iran Russia and Hezbollah stated their disappointment as world powers remain divided

Saudi Arabia bombed the northern stronghold of Iran-backed Shiite Houthi rebels and key military installations on Friday as a coalition led by the oil-rich kingdom carried out airstrikes also at the weekend as Yemen has become the newest conflict area in the region after Syria, Libya and Iraq. "The strikes hit at least six provinces, including an eastern area rich in oil and gas. In recent months, the Houthis have swept out of their northern strongholds and taken over Sanaa and other parts of Yemen," AP reported. Internationally recognized President Abed-Rabbo Mansour Hadi fled the country earlier this week to attend the Arab summit in Egypt.

Military officials were quoted as saying "heavy airstrikes early Friday targeted Saada, the stronghold of the Houthis, focusing on locations where rebel leader Abdul-Malik al-Houthi might be." "The grave of al-Houthi's brother Hussein al-Houthi, founder of the rebel group, was demolished in the strikes. Saudi warplanes also bombed the al-Sana army camp in the Arhab region northeast of Sanaa, run by commanders loyal to former President Ali Abdullah Saleh," AP reported. Saleh was an autocrat who ruled Yemen for more than 30 years until he was ousted after a 2011 Arab Spring popular uprising but was allowed to remain in the country. It is claimed that Saleh enjoys the loyalty of some of the country's strongest military units, who now fight alongside the Houthis. "Military officials said other strikes targeted army camps outside Sanaa in al-Dhale and Lahj provinces, including al-Annad base, where about 100 U.S. military advisers had been based but were forced to withdraw last weekend due to deteriorating security conditions. Strikes hit at least six provinces including Marib, an area of oil and gas wealth. The attacks there targeted and destroyed radars that the rebels could use to track Saudi warplanes. In the capital of Sanaa, heavy airstrikes came in waves overnight. Explosions rocked the city and anti-aircraft guns were heard returning fire. At least 18 civilians, including six children, have been killed and the casualty count was expected to rise," several agencies reported.

Saudi Arabia and the other Sunni Arab countries, especially the oil-rich Gulf kingdoms, consider that the power shift to Houthis is to witness the Iranian presence just near their borders. Iran that has been attempting to increase its influence in Iraq through mobilizing Shiite militias in the battle against Islamic State of Iraq and al-Sham (ISIS) supports the Assad regime in Syria and Houthis in Yemen. The Gulf along with Turkey and Egypt are deeply concerned over the Iranian expansion that is supported by Russia. The unseen conflict among the international and regional powers reflects itself on the other countries in the region, which suffer from the absence of political authority.

A high-level delegation from Pakistan was traveling to Saudi Arabia on Friday to hold talks on Yemen, following a meeting in Pakistan chaired by Prime Minister Nawaz Sharif to assess the situation. "If the sovereignty or territorial integrity of Saudi Arabia is threatened, Pakistan will defend it," Pakistani Defense Minister Khawaja Muhammad Asif told the country's parliament in remarks carried live on state-run television. He said there had been no decision to take part in the Yemeni conflict. According to defense officials in Washington, the U.S. is providing refueling tankers and surveillance flights for the Saudi operations, and there are several U.S. troops working in the operations center to help with coordination. The White House has said the U.S. was not joining with direct military action.

While the U.S, the UK, Egypt, Turkey, the Gulf countries, Pakistan and even conflict-torn Somalia praised the military operation, Iran and Russia voiced their concern and claimed that these strikes violate the sovereignty of Yemen. Iranian Foreign Minister Mohammed Javad Zarif said in a statement Friday that Tehran was "ready to cooperate with its brothers in the region, to make it easier for different groups in Yemen to have dialogue to protect the integrity and facilitate restoration of stability the security in that country." Speaking to Iranian President Hassan Rouhani, Russian President Vladimir Putin called for an "immediate cessation of military activities" in Yemen and increased efforts to find a peaceful solution to the crisis, the Kremlin said in a statement on Thursday. Iran-backed Shiite Hezbollah that fights along with the regime forces in Syria and has been accused of killing civilians also denounced the military intervention. "This adventure, [which] lacks wisdom and legal and legitimate justification and which is led by Saudi Arabia, is taking the region towards increased tension and dangers for the future and the present of the region," the group said in a statement.

European Union was hesitant on explicitly supporting the military intervention. EU foreign policy chief Federica Mogherini has said that a military response will not solve the crisis in Yemen, and urged all parties to act "responsibly." "I'm convinced that military action is not a solution," she said. "At this critical juncture, all regional actors should act responsibly and constructively to create as a matter of urgency the conditions for a return to negotiations," she said.

Yemen's slide towards civil war has made the country a crucial front in mostly Sunni Saudi Arabia's rivalry with Shi'ite Iran, which Riyadh accuses of stirring up sectarian strife through its support for the Houthis. Sunni Arab monarchies around Yemen have condemned the Shi'ite Houthi takeover as a coup, and have mooted a military intervention in favor of Hadi in recent days.

The advance of the Iranian-allied Shi'ite Houthi group raises fears of the possible disintegration of the country. The capital Sanaa has been under Houthi rebel control since September last year. The country has been facing severe political instability after the takeover of the presidential palace by Houthi militants prompted President Abd Rabbuh Mansour Hadi to tender his resignation. The Yemeni President Hadi fled to the southern port city of Aden, where he has re-established his presidency. As the country continues to be dragged into civil war, the U.N. has started to hold mediated peace talks between Houthis and Hadi's government in a bid to bring peace and stability back to the country.

Yemen is also of crucial importance for the U.S., as the country is home to one of their worst enemies, al-Qaida's deadliest franchise, the AQAP, which has orchestrated numerous high-profile terrorist attacks, including claiming responsibility for the Jan. 7 Charlie Hebdo massacre in Paris. Since 2002, the U.S. has been conducting counterterror strikes and operations against radical militants as part of U.S. national security policy. During the Obama administration, there have been 15 airstrikes and 107 drone strikes in Yemen as part of a "targeted-killing policy." The practices of the Obama administration raise serious laws-of-war concerns regarding the human cost of U.S security policy in Yemen.
Last Update: Mar 28, 2015 1:53 am
RELATED TOPICS