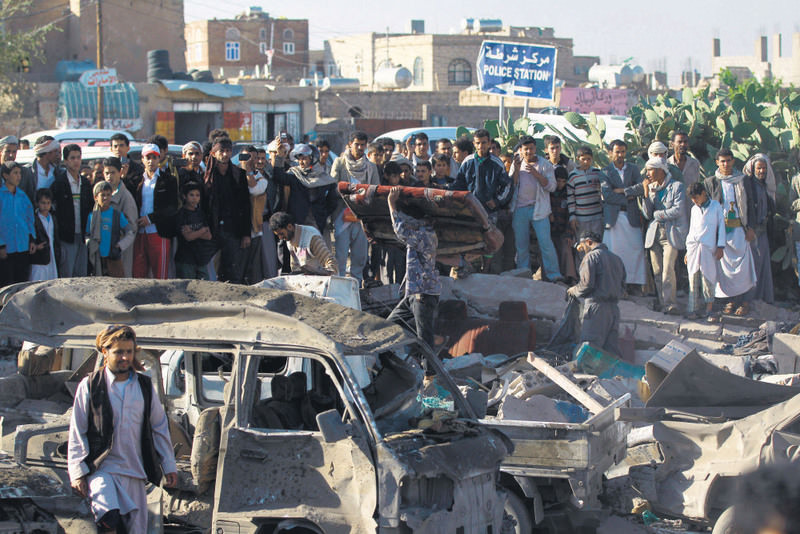 Rights groups point out that the death toll likely will increase in Yemen unless measures are taken to protect civilians.
by Yusuf Selman İnanç Mar 29, 2015 12:00 am

Saudi Arabia is bombing Iran-backed Houthi-controlled areas in Yemen while rights groups warn the armed factions to not harm civilians. On the other side, an Arab summit decided to create a unified Arab military force

Saudi Arabia has been continuing to crush targets of the Iran-backed Shiite Houthis, who have attempted to oust Gulf-backed and internationally-recognized President Abd Rabbuh Mansur Hadi. Several countries, including Turkey, the U.S., U.K., the small Gulf countries, Egypt, Pakistan and several other Muslim and Arab countries, have pledged their support for the military intervention, while Iran and Russia asked Riyadh to stop the airstrikes immediately. While the Saudi Arabia-led coalition attempts to break Houthi power across the country through bombing military strongholds and Houthis respond with attempts to expand the territories under their control, both Sunni and Shiite civilians suffer from the conflict, reports of rights groups have revealed.

Human Rights Watch (HRW) reported: "The Saudi Arabia-led coalition of Arab countries that conducted airstrikes in Yemen on March 26 and 27, 2015, killed at least 11 and possibly as many as 34 civilians during the first day of bombings in Sanaa, the capital. The 11 dead included two children and two women. Saudi and other warplanes also carried out strikes on apparent targets in the cities of Saada, Hodaida, Taiz, and Aden."

Deputy Middle East and North Africa Director at HRW Joe Stork said: "Both the Saudi-led forces and the Houthis need to do everything they can to protect civilians from attack. Reports of airstrikes and anti-aircraft weapons in heavily populated areas raise serious concerns that not enough is being done to ensure their safety." Yemeni Interior Ministry officials linked to the Houthi Ansar Allah group said that "warplanes bombed various parts of the city, including Bani Hawat, a predominantly Houthi neighborhood near Sanaa's international and military airports, and al-Nasr, near the presidential palace. We have documented that 23 civilians had been killed and 24 wounded. Among the dead were five children, aged two to 13, six women, and an elderly man, they said. The wounded included 12 children, aged three to eight, and two women."

Although the numbers cannot be verified by an independent group as it is impossible to report from the conflict-torn areas, it is a fact that civilians have been suffering from the attacks. In return, Saudi officials claimed that Houthi groups have placed anti-aircraft guns among civilian residents and uses them as human shelters. On social media, not only Houthi supporters, but also non-politicized Sunni civilians shared posts saying their daily lives have been affected negatively due to the clashes and that they live under threat as the Houthis warned that their fighters may carry out suicide attacks.

Amnesty International also reported: "At least six children under the age of 10 were among a reported 25 people killed in Saudi Arabian-led airstrikes in the Yemeni capital Sanaa early this morning," after speaking to hospital officials and eyewitnesses. The organization also reported that 14 homes were totally destroyed and the dead were pulled out from the rubble. "This high toll of civilian deaths and injuries in these attacks raises concerns about compliance with the rules of international humanitarian law. Saudi Arabian and any other armed forces carrying out airstrikes in Yemen are required to take all feasible precautions to spare civilians," said Said Boumedouha, deputy director of Amnesty International's Middle East and North Africa Program. The organization also warned Houthi and Yemeni government forces as Boumedouha said: "The Houthi armed groups and the Yemeni armed forces also have obligations under international humanitarian law to protect civilians under their control from the effects of attacks, including by avoiding, to the extent feasible, locating their fighters and weaponry within residential neighborhoods." Yesterday, the Saudi-led airstrikes killed at least 35 people, local media sources reported.

Despite the warnings against civilian losses, the increasing violence in the region and crystallization of the parties involved, an Arab summit that was held last weekend reached the decision of creating a unified military force despite the lack of political and economic unity. Arab leaders at a summit in Egypt announced the formation of a unified military force to counter growing security threats from Yemen to Libya. The decision is ardently supported by Egypt and Saudi Arabia, which enjoy close relations since Egypt's first democratically elected President Mohammed Morsi was overthrown by the incumbent President Abdel-Fattah el-Sissi. It is considered that both Saudi Arabia and Egypt want to lead the Sunni Muslim world amid the intensifying clashes and the increase of Iran's power in the region from Iraq and Syria to Yemen.

Yemen's slide toward civil war has made the country a crucial front in mostly Sunni Saudi Arabia's rivalry with Shiite Iran, which Riyadh accuses of stirring up sectarian strife through its support for the Houthis. Sunni Arab monarchies around Yemen have condemned the Shiite Houthi takeover as a coup and have proposed a military intervention in favor of Hadi in recent days.

The advance of the Iranian-allied Shiite Houthi group raises fears of the possible disintegration of the country. Sanaa has been under Houthi rebel control since September last year. The country has been facing severe political instability after the takeover of the presidential palace by Houthi militants prompted Hadi to tender his resignation. Hadi fled to the southern port city of Aden where he has re-established his presidency. As the country continues to be dragged into civil war, the U.N. has started to hold mediated peace talks between Houthis and Hadi's government in a bid to bring peace and stability back to the country.

Yemen is also of crucial importance for the U.S., as the country is home to one of their worst enemies, al-Qaida's deadliest franchise, al-Qaida in the Arabian Peninsula (AQAP), which has orchestrated numerous high-profile terrorist attacks, including claiming responsibility for the January 7 Charlie Hebdo massacre in Paris. Since 2002, the U.S. has been conducting counter-terror strikes and operations against radical militants as part of U.S. national security policy. During U.S. President Barack Obama's time in office, there have been 15 airstrikes and 107 drone strikes in Yemen as part of a "targeted killing policy." The practices of the Obama administration raise serious laws of war concerns regarding the human cost of U.S. security policy in Yemen.
Last Update: Mar 30, 2015 5:06 pm
RELATED TOPICS