Palestine joins ICC despite objections from US, Israel 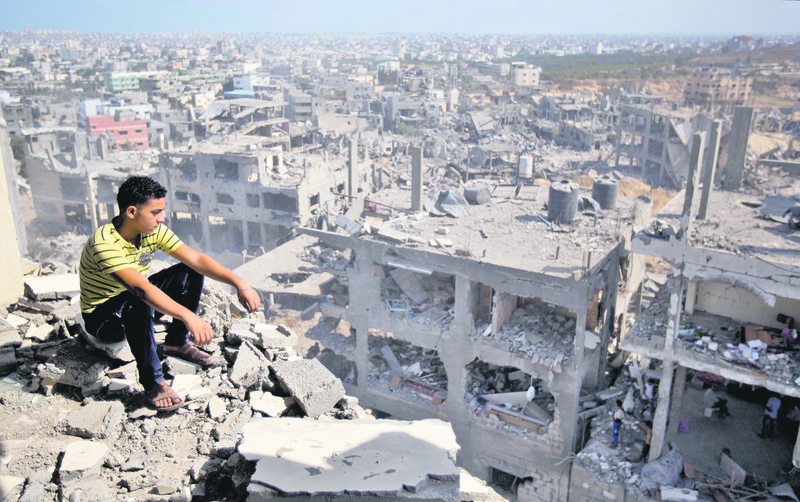 The Palestinian Authority will be able to pursue legal action into war crimes committed by Israel in Gaza.
by Yusuf Selman İnanç
Mar 31, 2015 12:00 am

Palestine has officially gained the right to pursue legal action against Israeli war crimes and illegal settlements although both U.S. and Israel warn the Palestinian Authority to refrain from the decision

Palestine will become an official member of the International Criminal Court (ICC) today after the Palestinian permanent observer at the U.N., Riyad Mansour, submitted the official application to join the ICC to the U.N. secretary-general in January. Palestinian President Mahmoud Abbas signed a document declaring that his government accepts the jurisdiction of the ICC. After the document was signed, the ICC formally recognized the Palestinians' accession to the Rome Statute, the basic document of the court, which paved the way for the prosecution of Israeli soldiers. On Jan. 16, the ICC's prosecutor, Fatou Bensouda, opened a preliminary examination "into the situation in Palestine." Al-Jazeera quoted Bensouda as saying, "I am looking at everything that is alleged to have been committed in the territory of Palestine. Depending on the facts and circumstances, my office will decide whether to continue to collect information, ultimately initiate an investigation or decline to initiate an investigation." ICC spokesman Fadi El Abdallah said, "It gives the Palestinian government rights … including the issues of elections, of judges and prosecutor, and votes on the amendments of the Rome Statute, as well as the possibility to refer situations to the ICC prosecutor."

Through joining the ICC, Palestine aims to bring human rights violations and war crimes committed by Israeli troops to the court since Israeli actions remain unpunished despite many reports by the U.N. and independent nongovernmental organizations that have shown that Israel committed war crimes several times. The U.N. confirmed the receipt of the documents and said the next steps were being reviewed. U.N. Secretary-General Ban Ki-moon announced in January that the state of Palestine will join the International Criminal Court on April 1. The ICC also made a statement, saying that "Palestine acceded to the Rome Statute on Jan. 2, 2015. The Rome Statute will enter into force for Palestine on April 1, 2015. In a related development, the Government of Palestine accepted, by means of a declaration under article 12(3) of the Rome Statute, the ICC jurisdiction since June 13, 2014."

Before Israel, the U.S. had voiced its concern over the application. A senior State Department official had said that steps to join the ICC will have implications for U.S. aid to the Palestinian Authority. "It should come as no surprise that there will be implications for this step, but we continue to review," the unnamed official said. Israel's Prime Minister Benjamin Netanyahu had also said that Israel will not let its soldiers be tried at the ICC. "We will not let Israel Defense Forces soldiers and officers be dragged to the International Criminal Court in The Hague," Netanyahu said at the start of the weekly cabinet meeting two days after the Palestinians filed the application to become a party to the court. Netanyahu decided in consultation with senior ministers to withhold the next monthly transfer of tax revenue, totaling some 500 million shekels ($125 million) but decided last week to continue transferring the revenue. In return, some Israeli media outlets reported that the Palestinian Authority declared that it will not pursue action against the illegal Israeli settlements. However, "It is a huge lie. Taxes have nothing to do with our ICC approach. The ICC train already departed," said Xavier Abu Eid, a spokesman for the Palestine Liberation Organization.

As Palestine joins the ICC, the 50-day Israeli attacks on Gaza last summer could possibly be launched. A report released by Amnesty International in November accused the Israeli military of committing war crimes in Gaza during attacks on the Gaza Strip this summer that left more than 2,100 Palestinians dead including many civilians. The group investigated eight cases and said in the report: "In the eight cases documented by Amnesty International in this report, Israeli aircrafts dropped aerial bombs on or launched missiles at homes they knew or should have known had civilians inside. The attacks resulted in the deaths of at least 111 individuals, including at least 104 civilians, and injured many others. Some 34 apartments and neighboring houses, home to more than 150 people, were destroyed or badly damaged in these attacks."

Moreover, the report said: "According to the Rome Statute of the International Criminal Court, intentionally directing attacks against the civilian population as such or against individual civilians not taking direct part in hostilities and intentionally directing attacks against civilian objects constitute war crimes. In addition, regarding the destruction of entire homes, including apartment buildings, the 1949 Fourth Geneva Convention regulates Israel's actions as the occupying power in the Gaza Strip." Further chastising Israel as Gaza's occupying force, the report indicated that "any destruction by the Occupying Power of real or personal property belonging individually or collectively to private persons, to the State, to other public authorities or to social or cooperative organizations is prohibited, except where such destruction is rendered absolutely necessary by military operations." The report also cited international humanitarian law, which "also prohibits disproportionate attacks, [which are those that] may be expected to cause incidental loss of civilian life, injury to civilians, damage to civilian objects or a combination thereof, which would be excessive in relation to the concrete and direct military advantage anticipated. Intentionally launching an indiscriminate attack resulting in death or injury to civilians or a disproportionate attack constitutes a war crime."

In another report released by the Geneva-based Euromid Observer for Human Rights in October said that Palestinian civilians were subjected to "inhumane and abusive treatment such as beating, humiliation and exposure to the hot sun while naked for long periods of time" by the Israeli army. The report, "Israeli Matrix of Control: Use of Palestinian civilians as human shields," said that the use of humans as shields is a repeated Israeli policy in the occupied Palestinian territories citing similar cases reported in the West Bank based on testimonies collected by observers. "The use of human shields is a form of cruel and inhumane treatment and constitutes a flagrant violation of international humanitarian law and a war crime according to the Rome Statute of the International Criminal Court," the report said. The human rights organization urged the Fact Finding Committee of the Gaza Conflict established by the U.N. Human Rights Council to put "pressure on all parties found to be guilty of war crimes committed by the Israeli army."
Last Update: Mar 31, 2015 10:39 pm