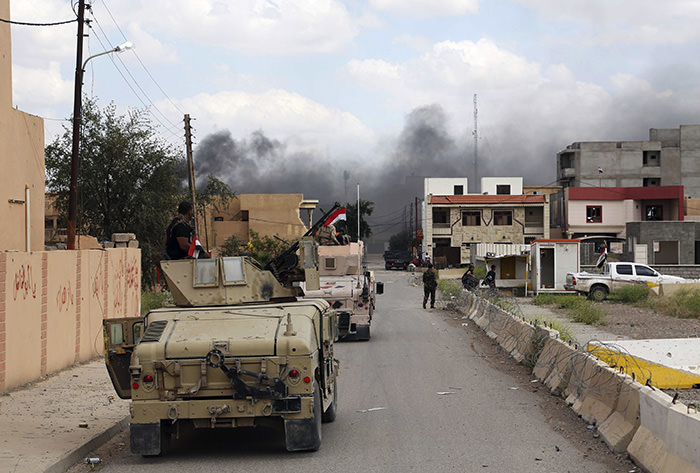 Tikrit, one of ISIS’ strongholds, was re-captured by Iraqi forces along with U.S. air support and Iranian-backed Shiite militias, yet Sunni residents fear aggression from militias

Iraqi forces along with Iranian-backed Shiite militias and U.S. air support pried Tikrit away from the Islamic State of Iraq and al-Sham (ISIS), which captured deposed former President Saddam Hussein's hometown last August. The capture of Tikrit is considered the first step in driving ISIS completely out of Iraq, as the city is to play a large strategic role in the prospective assault on Mosul. The Associated Press reported: "Tikrit is at the intersection of the main highway leading from Baghdad to Mosul and another key road to the northern oil hub of Kirkuk. Iraqi forces halted the ISIS advance outside the town of Samarra to the south of Tikrit last summer and recaptured the oil refinery town of Beiji to the north in November. Holding Tikrit would secure the vital north-south supply route ahead of an attempt to retake Mosul, which could begin in the coming weeks." Touching upon the symbolic value of the city, AP reported: "Tikrit is the hometown of Saddam Hussein, whose dictatorship ruled Iraq for more than two decades before it was toppled by the 2003 U.S.-led invasion. Since then the Sunni minority has felt increasingly marginalized by the Shiite majority and the Shiite-led government in Baghdad. In 2006, long-running tensions boiled over into sectarian violence that claimed tens of thousands of lives. ISIS was able to rally Sunni support by portraying its advance as a 'revolution' against the Shiite-led government, and Tikrit fell in a matter of days last June as the security forces crumbled. Restoring security in the city will be a major test of the government's ability to stitch the country back together."

The city is of crucial importance to the sectarian tension of the deeply-troubled country and when the operation for re-capturing Tikrit started, the U.S. and rights groups warned Baghdad to prevent human rights violations against Sunni residents since some leaders of Shiite militias vowed revenge. "The Iraqi army and its Shiite allies are unlikely to be able to secure Tikrit without the support of powerful Sunni tribes, many of which deeply distrust the government," AP reported, but some members of Sunni tribes have already posted on Twitter that they are suffering from the aggression of the Shiite militias. Prior to the operation that was initially led by Major Gen. Qasem Soleimani of the Quds Force of the Iranian Revolutionary Guards, the U.S. and the Human Rights Watch (HRW) warned that an offensive to retake control of Tikrit must not fuel sectarian tensions. "Iraqi forces fighting to recapture the city of Tikrit from ISISshould protect civilians from revenge attacks by pro-government militias. [HRW] has documented numerous atrocities against Sunni civilians by pro-government militias and security forces after they retook other towns," the organization said. HRW Deputy Director of Middle East and North Africa division Joe Stork said: "All commanders in Tikrit need to make sure that their forces protect civilians and allow them to flee the combat zone. Past fighting raises grave concerns that Tikrit's civilians are at serious risk from both ISIS and government forces, and both sides need to protect civilians from more sectarian slaughter." White House spokesman Josh Earnest also said: "It is important, Iraqi Prime Minister Haider al-Abadi himself has indicated, that this operation should not be used as an excuse or as cover for individuals taking sectarian-motivated retribution."

However, despite all warnings by the international community and even by Abadi, the fears of the Sunni residents who suffer from ISIS aggression for refusing to ally with the group and Shiite militias, according to HRW, have become real. "Pro-government militias were seen looting shops in the center of the Iraqi city of Tikrit on Wednesday," Agence France-Presse (AFP) reported. "The militias took items including clothing, shampoo and shaving cream from two shops in central Tikrit before driving away. Two trucks were also seen leaving Tikrit loaded with new tires, a generator and a mirror that fell out and shattered on the highway. As they have in other areas, militias also spray painted the names of their groups on houses and shops in the city, including on unbroken windows that had survived the fighting," AFP reported. Several other media outlets also reported that Sunni residents voiced their concern of the possibility of facing further aggression.

Abadi visited the city carrying an Iraqi flag and surrounded by jubilant forces. He said that military engineering units still need more time to clear Tikrit of booby traps and looked to the next steps for the city and province. "God willing, there will be a fund to rebuild areas destroyed by ISIS and the war. Tikrit and Salahuddin areas will be covered by this fund," Abadi said. Earnest said the victory was compelling evidence that the U.S. strategy against ISIS was working. He said the Tikrit operation had been stalled for weeks, but that coalition airstrikes and advancing local forces apparently caused ISIS fighters to withdraw. "What is clear is that over the last five days, this strategy of backing up Iraqi security forces that are multi-sectarian in nature with coalition airstrikes is a pretty powerful combination," Earnest said. The objective, said Interior Minister Mohammed Salem al-Ghabban, is to now restore normalcy as quickly as possible. "After clearing the area from roadside bombs and car bombs, we will reopen police stations to restore normalcy in the city, and we will form committees to supervise the return of people displaced from their homes," Ghabban said. He said the government would help displaced residents return and that a civil defense unit will be combing the city for roadside bombs and car bombs. "ISIS is completely defeated [in Tikrit]," he added.

"A satellite image of Tikrit, released in February by the UN showed that at least 536 buildings in the city have been affected by the fighting. Of those, at least 137 were destroyed and 241 were severely damaged. The current offensive also exacerbated previous damage, particularly in the south where clashes have been the most intense," the AP reported. Ghabban told AFP that a burial site had been discovered in a freshly retaken palace complex on the banks of the Tigris River. "This place reminds us of those who were unjustly killed, it reminds us of the massacre. They were innocent people," he said.
Last Update: Apr 02, 2015 5:18 pm
RELATED TOPICS