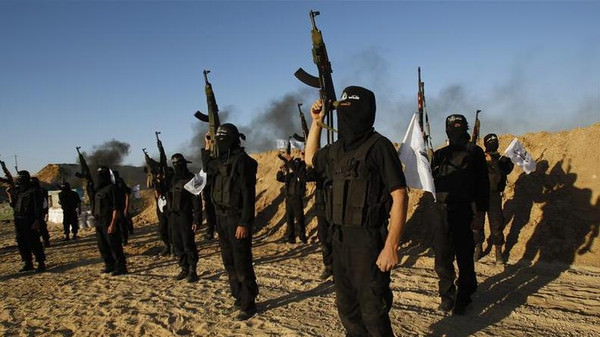 by Anadolu Agency Apr 03, 2015 12:00 am
A militant group, which has recently pledged allegiance to ISIS, claimed on Friday deadly attacks which were carried out on several security checkpoints a day earlier in Egypt's Sinai Peninsula.

Welayet Sinai, formerly known as Ansar Beit Al-Maqdis, said on Twitter that its fighters had attacked seven checkpoints on a highway linking northern Sinai's Sheikh Zuweid and al-Arish cities with rocket-propelled grenades and other heavy-duty weapons at dawn Thursday.

The group also claimed that its militants had all managed to flee the scene after killing "dozens" of military personnel.

It also said that the militants had seized two armored vehicles and "large amounts" of military equipment from the sites of the attacks.

The Egyptian army on Thursday said that five of its personnel had been killed in an "exchange of fire" near a number of security checkpoints in the northern Sinai Peninsula, while local medical sources put the death toll at 16, including three civilians.

Ansar Beit al-Maqdis, which changed its name last year to "Welayet Sinai" ("the State of Sinai"), has claimed responsibility for most large-scale attacks on security personnel in the restive Sinai Peninsula which shares a border with Israel and the Gaza Strip.

Last year, ISIS overran vast territories in both Iraq and Syria, winning the allegiance of several militant groups across the Middle East.

Along with police and army personnel, militant groups in Sinai have also reportedly targeted local residents suspected of collaborating with the security forces.

For over a year, Egyptian authorities have been cracking down on militants in the Sinai Peninsula, which shares borders with both Israel and the Gaza Strip.

The campaign comes amid a spike in militant attacks on security personnel since the 2013 ouster of elected President Mohamed Morsi by the army.
Last Update: Apr 03, 2015 7:01 pm
RELATED TOPICS