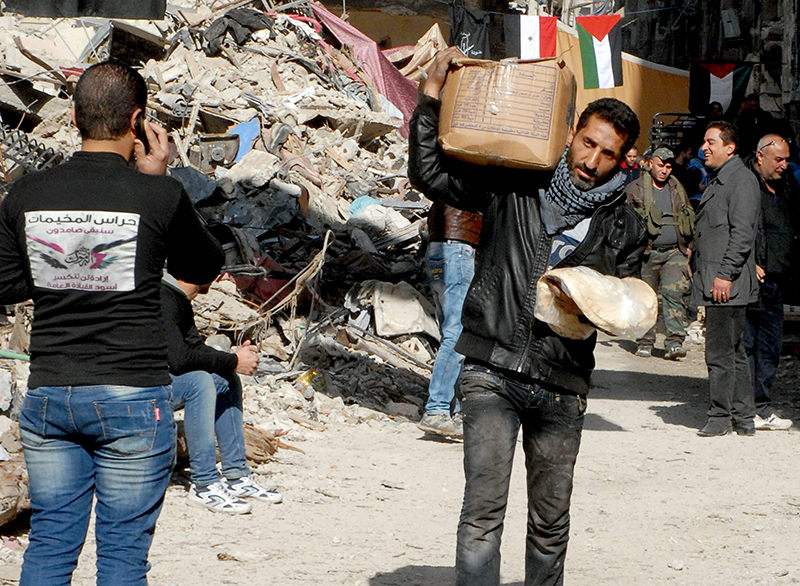 | EPA Photo
by Compiled from Wire Services Apr 05, 2015 12:00 am
At least 13 people were executed by ISIS militants in Yarmouk camp in southern Damascus on Sunday, according to the Syrian activists.

The Syrian Network for Human Rights, or SNHR, released a statement and said that the self-proclaimed Islamic State of Iraq and al-Sham (ISIS) militants killed at least 13 people in Yarmouk camp, the biggest Palestinian refugee camp in Syria.

ISIS militants marched into Yarmouk on April 1, and many Palestinian and Syrian people have since been trapped. "ISIS militants have killed Syrian opponents in Yarmouk camp. The (Bashar) Assad regime's intense bombardment and militants' attacks have been continuing in the camp," the statement said, stressing the dire condition of the camp's residents.

An activist based in an area just south of Damascus, Hatem al-Dimashqi, said many residents started fleeing Yarmouk camp after midnight Sunday after shelling by government forces and clashes between the ISIS fighters and Palestinian militants. The camp has been subjected to intense shelling and airstrikes by the government.

Separately, The Arab League called on the international community to take action to protect Yarmouk camp's Palestinian refugees from ISIS militants on Sunday.

The league also emphasized that the displaced Palestinians are just guests in Syrian lands until comprehensive peace is established in the region, and then they will be able to return home.

The Yarmouk camp has remained under siege by Syrian regime forces and pro-regime militias since last September. Located on the outskirts of Damascus, the camp accommodated more than 160,000 Palestinian refugees before the Syrian civil war began in March 2011.

Most of the refugees were forced to leave after the conflict began.