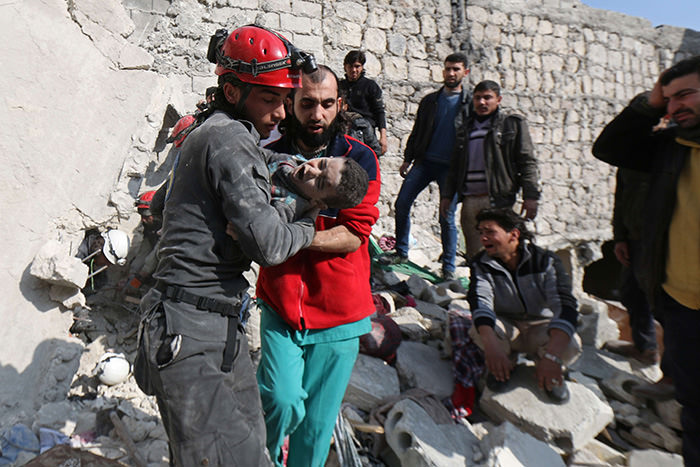 |AFP Photo
by Anadolu Agency Apr 08, 2015 12:00 am
Bashar al-Assad's regime is responsible for the ongoing massacres and human rights violations in Syria, but a great deal of responsibility also falls on the shoulders of the United Nations, an international law and human rights scholar has said.

"In Syria, many international rules have been violated and there must be 'real responsibility' for this shame," Assistant Professor Selman Öğüt, a researcher at the Foundation for Political, Economic and Social Research (SETA), told The Anadolu Agency.

The Syrian civil war has entered its fifth year, and since the conflict began in March 2011, Assad and his regime have broken every international human rights law in the book, killing more than 220,000 people in the process and displacing millions of Syrian men, women and children.

Meanwhile, nothing indicates that Assad has any intention of stepping down.

"The state is like a ship; and when there is a storm, the captain does not run away and leave his ship to sink," Assad told Paris Match news magazine in November 2014 at a time when he had decided to run for a third term as president. "If passengers on that ship decided to leave, the captain should be the last one to leave, not the first."

"One of the most important principles of universal law is predictability," Öğüt said. "Both in terms of international law and domestic law, subjects of a legal regime should know the results of a violation of their rights."

Öğüt said the violator should know what kind of "pay-off" awaits him for crimes he has committed.

He referred to the 2011 UN International Law Commission's Draft Articles on the Responsibility of International Organizations, describing them as a "deep-rooted and entrenched work," although no international agreement or convention has been signed to put them into action.
The draft articles are an extension of meticulous work on the 2001 Responsibility of States for Internationally Wrongful Acts, which was prepared over more than 50 years to fill gaps in that field.

"The case of Syria is unfortunately befitting for revealing the responsibility of the UN under the terms of this article," Öğüt said.

Öğüt added that not only is the Syrian regime responsible for the internationally wrongful acts that it continues to commit, but that the UN cannot escape its responsibility for the Syria crisis based on Article 1/1 of the UN Charter.

According to the article, the main purpose of the UN is to maintain international peace and security and to "take effective collective measures for the prevention and removal of threats to peace and for the suppression of acts of aggression or other breaches of peace."

Furthermore, Öğüt said that the UN Security Council plays the "main-role" in the use of force, which is forbidden, with some exceptions, such as self-defense.

An alternative to the UN Security Council

Time and time again, the UN Security Council has failed to pass resolutions against the Syrian regime, because of vetoes by Russia and China, but there are other options, Öğüt said.

"In media outlets, we read and listen to some experts and scholars emphasizing the Uniting for Peace resolution, which was passed by the General Assembly stating that in any cases where the Security Council fails to act as required to maintain international peace and security, the General Assembly shall consider the matter immediately in order to restore international peace and security," Öğüt said.

According to the third section of the Draft Articles of International Organizations Responsibility for Wrongful Acts, international organizations are responsible for reparations, which include restitution, compensation and satisfaction.

"Therefore, for the injuries that occurred in Syria, the UN is responsible for the recovery process," Öğüt added.

Öğüt, however, said that achieving results by using his argument is no simple matter, because the UN can simply argue that the articles are non-binding.

"In my opinion those articles are binding as they should be assessed as finding a place in primary sources of international law," Öğüt said. "What I would like to underscore is the responsibility of the UN as an international organization, which considers maintaining international peace and security as its duty."

"One cannot deny that in the case of Syria, the UN's responsibility has failed to emerge," he added.
Last Update: Apr 08, 2015 2:15 pm
RELATED TOPICS