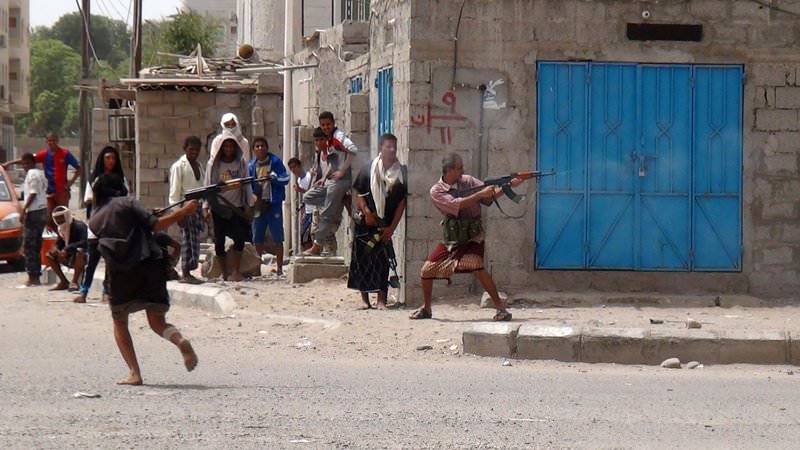 Clashes in the northern Dar Saad neighbourhood of the southern Yemeni city of Aden on April 8, 2015 (AFP Photo)
by French Press Agency - AFP Apr 09, 2015 12:00 am
A 28-year-old Norwegian freelance journalist has been arrested in Yemen and accused of spying, media reports said on Thursday.

Raymond Lidal was detained in late March after he failed to show a journalist's visa while filming Saudi-led airstrikes against Houthi Shiite rebels, according to Verdens Gang newspaper (VG).

"Verdens gang has learned from several sources... that the Norwegian was suspected of espionage and was accused of carrying out some kind of investigation," the paper said.

Norway's foreign affairs ministry confirmed that a Norwegian national had been arrested in Sana'a but would not comment on his identity or the reasons for the arrest.

A foreign ministry spokeswoman, Veslemoey Lothe Salvesen, told AFP that Norway had been in touch with Yemeni authorities and insisted that they were "responsible for his security and health".
The ministry added that details of the case were unclear due to the "chaotic situation" in the country.

Norwegian public broadcaster NRK - one of Lidal's employers - said he had been reporting from Yemen for several media outlets since 2013 while studying there.

Iranian-backed Houthi rebels have seized swathes of territory in Yemen since they entered Sana'a in September forcing the government to flee and prompting airstrikes since March 26 by a Saudi-led coalition of Arab states.
Last Update: Apr 09, 2015 5:49 pm
RELATED TOPICS