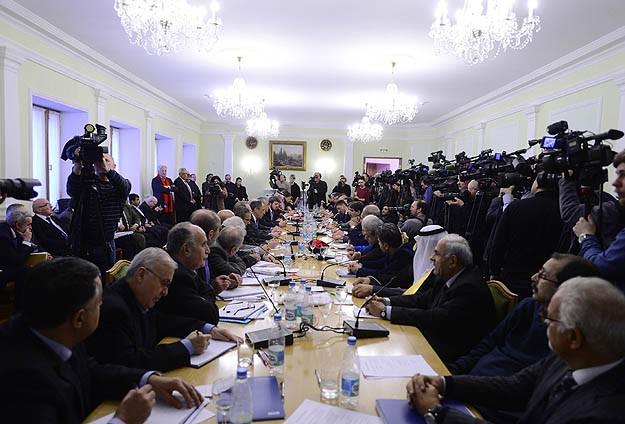 |AA Photo
by Anadolu Agency Apr 10, 2015 12:00 am
A second meeting held in Moscow in a bid to find a permanent solution to Syria's four-year civil war has ended in failure, according to a Syrian opposition representative.

Hassan Abdulazim's comments came on Friday, four days after delegates from the regime of Syrian President Bashar al-Assad and the Syrian opposition met in the Russian capital as part of a Russian initiative to find a solution to the conflict.

Abdulazim, general coordinator of the National Coordination Body for Democratic Change in Syria (NCB), criticized the attitude of the Assad representatives, saying they had refused to establish an environment of confidence.

Syrian opposition representative Samir Aita, a member of the Syrian Democratic Forum, also alleged that Syria's ambassador to the United Nations, Bashar al-Jaafari, was "not eager to find agreements and did not accept some suggestions aimed at helping solve many problems in Syria."

The two sides had earlier prepared a joint letter of agreement on topics including national sovereignty, protection of Syrian territory and people, the fight against terrorism, the lifting of sanctions and rejection of unilateral sanctions imposed on the Syrian people.

However, many key Syrian opposition figures and groups, including the National Coalition of Syrian Revolution and Opposition Forces (SMDK), did not attend the meeting.

Syria has been gripped by constant fighting since the regime of Syrian President Bashar al-Assad launched a violent crackdown in response to anti-government protests in March 2011, triggering a conflict that has killed more than 210,000, according to the UN.

The conflict has created an acute refugee crisis, with as many as 3.8 million Syrian refugees currently registered in neighboring Turkey, Jordan, Lebanon and Iraq.