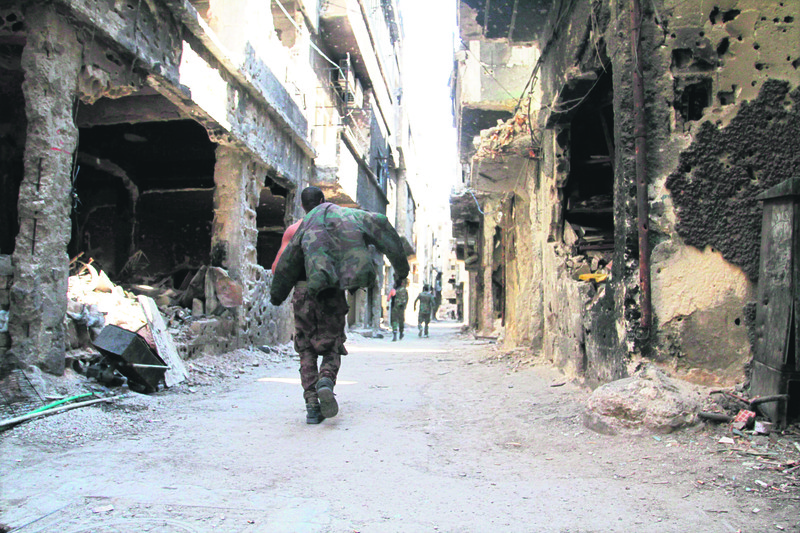 A man walks through the ruined streets of the Yarmouk refugee camp.
by Daily Sabah with Reuters Apr 10, 2015 12:00 am

The Yarmouk refugee camp which was seized by ISIS in cooperation with al-Nusra Front, may witness the slaughter of trapped civilians unless humanitarian aid and assistance can be delivered on time, the U.N. said

United Nations officials warned on Wednesday of a potential "slaughter of innocents" unless aid and assistance reaches a Palestinian refugee camp in Syria where thousands of civilians are trapped up in a vicious battle. Some 18,000 civilians, including 3,500 children, are caught in the camp outside Damascus just a few miles from President Bashar al-Assad's palace. The camp largely fell under Islamic State of Iraq and al-Sham (ISIS) control last week and is surrounded by the Syrian army. But as fighting intensified in and around the camp, the remaining refugees have been left without food, water and medical supplies prompting aid agencies to call for the warring parties to allow access for aid and evacuations.

"The level of inhumanity that Yarmouk has descended to is frankly unimaginable," Chris Gunness, a spokesman for the U.N. Relief and Works Agency (UNRWA), told the Thomson Reuters Foundation in a Skype interview from Jerusalem. "The situation is absolutely desperate. We need urgently to have humanitarian access, which is why UNRWA is calling for all parties to exercise influence with their clients on the ground so that we can get into the camp."

Gunness said since the fighting escalated a week ago, UNRWA aid convoys have not been able to enter the camp and that the already dire situation has become more desperate with people left without water, food or medicine and the growing risk of disease. Gunness said a few Palestinian charities had managed to get some supplies to the camp but otherwise people were cut off with the risk of disease rising daily.

"When you have a public health system completely shot to pieces, when you have such terrible levels of food insecurity ... disease is going to soar," said Gunness. "We have tragic pictures of children and others scooping up water out of holes in the streets." Gunness said UNRWA had not been a regular presence in the camp for at least two years so it was impossible to estimate the number of people now ill or the death toll. Gunness said an estimated 94 civilians, including 43 women and 20 children, managed to leave the camp on Sunday and were provided with humanitarian support so there was no reason why more could not be helped to safety. "For me it is unconceivable that the so-called civilized world can stand and watch what is going on in Yarmouk," he said. "We are facing a potential slaughter of the innocents and the world cannot stand by and watch that happen."

Yarmouk, an unofficial refugee camp, is a district of Syria's capital, Damascus and was established in 1957 when thousands of Palestinians were displaced by Israel. The camp has become one of the strongholds of the pro-Palestinian Liberation Organization (PLO) in the last few decades and has therefore established better relations with the Syrian regime. After the clashes started in 2011, the camp residents, suffering from poverty, were subjected to fierce battles between the groups loyal to the regime and the opposition groups. The regime has not avoided bombing its residents and cutting supply lines for food and water. At least 166 camp residents, including dozens of babies, have starved to death in recent years as the regime did not allow the influx of humanitarian aid materials. Thus, the victims of the Arab-Israeli wars became victims of the civil war. And now, the residents' bad luck has left them stuck in between the Islamic State of Iraq and al-Sham (ISIS) and the regime, with neither side behaving well. Before the Syrian war erupted in 2011, the camp accommodated more than 180,000 Palestinian refugees. However, due to severe security conditions, around 140,000 refugees have been internally displaced as a result of the war. The recent reports state that over 18,000 civilians trapped in the camp have been suffering from desperate humanitarian conditions, without access to basics.

The Arab uprisings, which euphorically swept across the Middle East and North Africa several years ago, appealed to Syrians who had lived under the dictatorship of the Assad family since 1970, when Bashar's father Hafiz Assad seized power. Since then, the majority Sunnis had been forced to live in a police state that tried to control every movement, organization and business through the use of a wide-ranging intelligence service. In March 2011, Syrians were emboldened enough to raise their voices against the dictatorship. However, the regime's response was not as peaceful as the protests, and the country was subsequently dragged into a deadly civil war after opposition groups took up arms against the government. The Syrian civil war has now entered its fifth year and has caused the death of more than 200,000 people and at least 60,000 are missing. The war has also displaced nearly 10 million people. While the international and regional powers continue endless discussions, the regime does not just use conventional weapons, but also chemical weapons. About 13.6 million people, equivalent to the population of London, have been displaced by conflicts in Syria and Iraq, many without food or shelter, the U.N. refugee agency revealed. The 13.6 million include 7.2 million displaced within Syria – an increase from a long-held U.N. estimate of 6.5 million, as well as 3.3 million Syrian refugees abroad, 1.9 million displaced in Iraq and 190,000 who have left to seek safety. The vast majority of Syrian refugees have gone to Lebanon, Jordan, Iraq and Turkey. Western countries have been frequently criticized by aid agencies and the U.N. for not opening their borders to the Syrian refugees as the most developed countries have received the least number of refugees.
Last Update: Apr 10, 2015 11:23 am
RELATED TOPICS