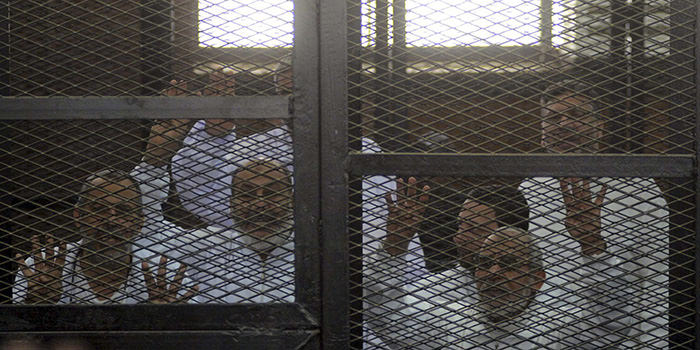 |Anadolu Agency/Getty Photo
by Daily Sabah with Agencies Apr 11, 2015 12:00 am
An Egyptian court has sentenced Mohamed Badie, the leader of the Muslim Brotherhood, and 13 other senior members of the group to death for inciting chaos and violence, a judge said in a televised session on Saturday.

The court also sentenced U.S-Egyptian citizen activist Mohamed Soltan to life in jail for supporting the group and transmitting false news. He is the son of Brotherhood preacher Salah Soltan, who was among those sentenced to death on Saturday.

The sentences can be appealed before Egypt's highest civilian court.

Egypt's first democratically elected Mohammad Morsi who was overthrown after a bloody military coup, headed by the incumbent President Abdel-Fattah el-Sissi on July 2013.

The international community, including Turkey and Western countries and right groups, have harshly condemned Egypt over the mass killings and imprisonments.

The Human Rights Watch organization report on the Rabaa massacre released on August 12 revealed the systematic and intentional use of excessive lethal force by police and army forces that resulted in the mass killings of protesters on a scale unprecedented in Egypt.

In the meantime, the U.S. State Department has approved the sale of $57 million in missiles to Egypt, spokesman Jeff Rathke said Friday.

Earlier this week, the State Department said Egypt requested the sale of 356 Hellfire missiles, along with repair parts and logistical and program support.

The missiles will be used by Egypt due to "regional threats and to strengthen its homeland defense," the State Department said at the time of the request.

The U.S. President Barack Obama said last week that he would release the hold on military assistance to Egypt, after nearly two years.

The funding will allow Egypt to remain the second largest recipient of U.S. foreign military funding, behind only Israel.

Before the sale of the missiles is allowed, Congress must give final approval.
Last Update: Apr 12, 2015 1:06 pm
RELATED TOPICS