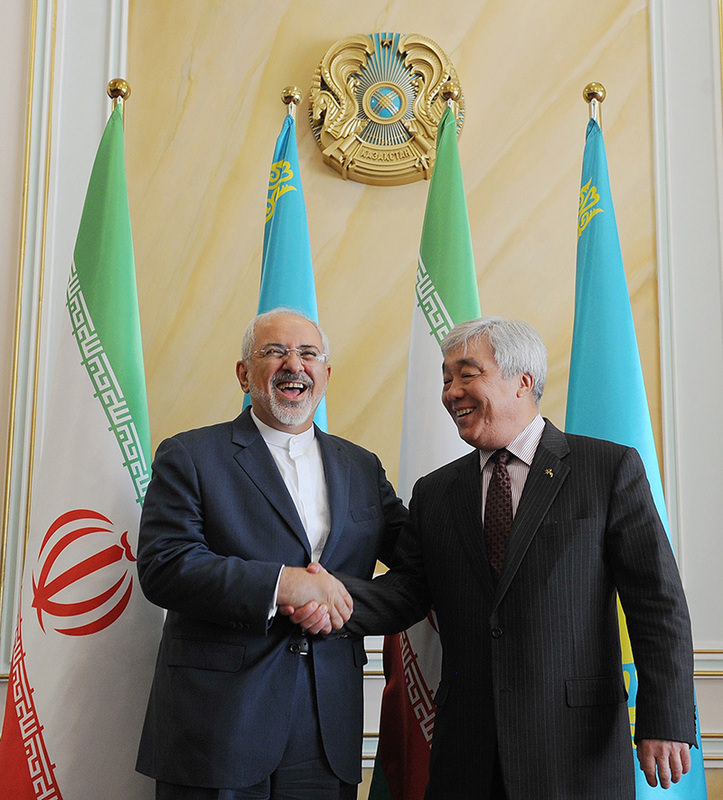 Iranian Foreign Minister Mohammad Javad Zarif shakes hands with his Kazakh counterpart Yerlan Idrisov during their meeting in Astana on April 13, 2015 (AFP Photo)
by Daily Sabah with Reuters Apr 13, 2015 12:00 am
Iran's foreign minister Mohammad Javad Zarif called on Monday for the formation of a new Yemeni government and said Iran could play a role in a political transition in the country.

Zarif's comments are likely to anger Saudi Arabia, its regional rival, which has been carrying out air strikes in Yemen for three weeks with the purpose of halting the advance of the Iranian-allied Shi'ite Muslim Houthi rebels towards the southern port city of Aden.

"I had the privilege of participating in the Bonn Conference when we created the Afghan government. Actually we didn't do it, the Afghans did ... We can do that in Yemen too," Mohammad Javad Zarif said in a speech during a two-day visit to Kazakhstan.

The Bonn Conference was held in December 2001 to rebuild the Afghan state after its Taliban rulers were ousted in a U.S. invasion supported by allied Afghan forces. Prominent Afghans agreed to support an interim government led by Hamid Karzai, who later became president.

Zarif played a key role in the formation of that government, persuading quarrelling parties in Iran's poorer neighbour to negotiate.

Saudi Arabia and its Sunni Arab allies are trying to shore up support for Yemeni President Abd-Rabbu Mansour Hadi, who fled to Riyadh as the Houthis closed in on Aden.

The conflict in Yemen is widely seen as one of the Middle East's proxy wars between Sunni-ruled Saudi Arabia and Shi'ite Iran.

Tehran says it has given no military support to the Houthis and on Sunday denied a claim by militiamen in Aden that they had captured two Iranian military officers advising the rebels.

Zarif reiterated Iran's call for an end to the Saudi-led air strikes in Yemen.