Proxy war between Riyadh and Tehran under sectarian cloak 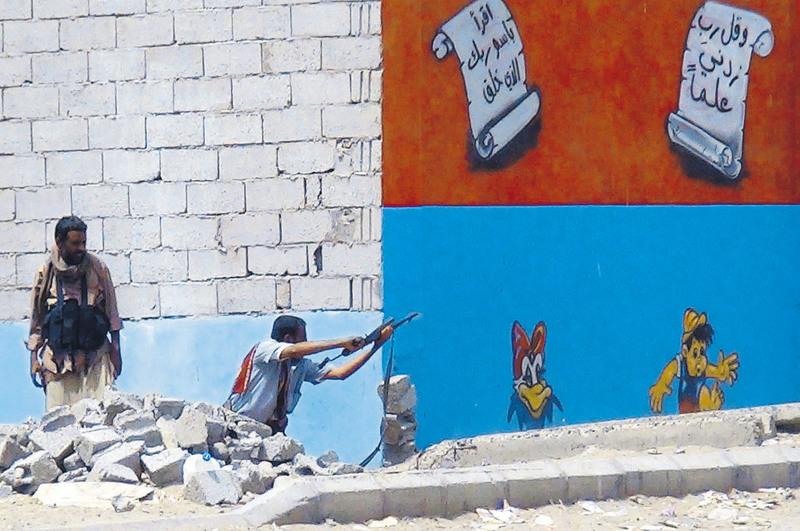 Disputes over regional issues, including Yemen, Iraq and Syria, and also the rivalry over oil exportation between Iran and Saudi Arabia, have been hiding behind the pretext of sectarianism

The biggest proponents of Salafi-Wahhabi and Shiite sectarianism in the Middle East, Saudi Arabia and Iran are waging a proxy war in Iraq, Syria and Yemen. Millions of innocent people in the region are currently paying the deadly price of sectarianism.

The Middle East, which has been an area of sectarian conflict since the early years of Islam - yet remained relatively calm under the rule of the Ottoman Empire - has been dragged into a new sectarian wave as anachronistic disputes have been triggered by regional powers with the intention of expanding their influence. Iran and Saudi Arabia, which has a centralized Shia version of Islam and the strict religious jurisprudence of Salafi-Wahhabist thought for its policies, respectively, have entered into a competition over the region through applying sectarian policies from which the people of the region suffer. Being far from the mainstream Islamic understanding that is in effect from Indonesia to Senegal, the two countries have been following expansionist policies. Iran has adopted the policy of leading and uniting the Shiite communities in different Arab countries, including Iraq and Yemen, following the revolution in 1979, whereas Saudi Arabia aims to expand Wahhabi Islam through aiding Wahhabi communities in several countries, as the strict version of Islam rejects the accuracy of any other Islamic interpretation.

Except for the fact that sectarian difference appears an instrument for political dispute, a noteworthy similarity between the two countries is that both Iran and Saudi Arabia are rich in natural resources. Iran is home to the richest natural gas and oil reserves in the region, while Saudi Arabia is the biggest oil exporter in the world. Therefore, Riyadh has been opposing the nuclear talks between the p5 + 1 countries (Russia, the U.S., China, the U.K., France and Germany) and Iran, which resulted in the gradual lifting of the sanctions on Iran, paving the way for Tehran's return to the oil and natural gas market. The U.S. Energy Information Administration gives the following detail on Iran: "Iran holds the world's fourth-largest proven crude oil reserves and the world's second-largest natural gas reserves. Despite the country's abundant reserves, Iran's oil production has substantially declined over the past few years, and natural gas production growth has slowed.

International sanctions have profoundly affected Iran's energy sector. Sanctions have prompted a number of cancellations or delays of upstream projects, resulting in declining oil production capacity. Iran holds nearly 10 percent of the world's crude oil reserves and 13 percent of OPEC reserves. About 70 percent of Iran's crude oil reserves are located onshore, with the remainder mostly located offshore in the Persian Gulf. Iran also holds proven reserves in the Caspian Sea, although exploration has been at a standstill." After underlining the decline in oil production of Iran, the group says "Iran's crude oil production fell dramatically in 2012, following the implementation of sanctions in late-2011 and mid-2012. Iran dropped from being the second-largest crude oil producer in OPEC to the fourth in 2013, after Saudi Arabia, Iraq, and narrowly behind the United Arab Emirates (UAE). Iran's production increased in 2014, raising Iran's rank to the third-largest crude oil producer in OPEC during the first half of 2014." Touching on the natural gas reserves, the report says "Iran is the second-largest proven natural gas reserve holder in the world, behind Russia. Iran holds 17 percent of the world's proven natural gas reserves and more than one-third of OPEC's reserves. Iran's largest natural gas field, South Pars, is estimated to hold roughly 40 percent of Iran's gas reserves. However, the vast majority of Iran's gas reserves are undeveloped."

In other words, the rivalry between Iran and Saudi Arabia is not only sectarian and about the expansion of control issue, but also a competition over dominating the international natural reserve market, as Iran has the potential to lead the sector.

Following the Arab Spring that euphorically swept across the region with the purpose of replacing the decades-old dictatorship rulings with democratic systems, the political atmosphere deteriorated as the Middle East became an arena for a power struggle between both the international actors, including the U.S. and Russia, and regional ones like Saudi Arabia and Iran. While Saudi Arabia, along with Turkey and the Western powers, has been demanding the ousting of Syrian President Bashar Assad, Iran, with the support of Russia, has been ardently backing the Syrian regime through sending officers from the elite Revolutionary Guards and mobilizing the Shiite group, Hezbollah.

In the case of Iraq, Saudi Arabia has never favored the Shiite rule that emerged after the U.S.-led invasion following the restrictions on Sunni politicians. The oil-rich Gulf country has never announced its support for al-Qaida-affiliated groups and the Islamic State of Iraq and al-Sham (ISIS) that controls large swathes of Iraq and Syria, in spite of the fact that these radical groups also apply a Wahhabi/Salafi version of Islamic jurisprudence. However, the Riyadh administration has preferred to remain inapproachable by Iraq's Shiite politicians while pledging support for some Sunni tribes. In contrast to Riyadh's policy, Iran has been an ardent supporter of the Shiite-led Baghdad administration. In the wake of ISIS's advance in Iraq, Iran has not hesitated to send its warplanes and elite officers and ask the armed Shiite militiamen to battle the extremist group. The Iranian involvement has drawn a rebuff from Saudi Arabia, as the Shiite militiamen were accused of attacking Sunni civilians and looting their properties. Although Iraqi Prime Minister Haidar al-Abadi, who was elected after the resignation of the-then Prime Minister Nouri al-Maliki, who has frequently been accused of pursuing sectarian policies, and Saudi Arabian King Salman, who has recently ascended to the throne, have launched a détente period following al-Abadi's visit to Riyadh, Saudi Arabia does not conceal its disappointment with the Iranian presence in Iraq.

The latest location in the dispute between Iran and Saudi Arabia is Yemen as the Tehran administration, through receiving support from Moscow, as it does in Iraq and Syria, explicitly supports the Shiite Houthi rebels who want to establish control over the country. Adversely, the Riyadh administration has rejected the Houthis' demands and claimed that the advance of the Shiite minority poses a threat for its national security. Therefore, Saudi Arabia has established a coalition that has received the support of EU countries, the U.S., Turkey and the Sunni Arab world to stop a power shift in Yemen. The advance of the Iranian-allied Shiite Houthi group raises fears of the possible disintegration of the country, while the Saudi-led coalition defends its territorial integrity. Sanaa has been under Houthi rebel control since September last year and the country has been facing severe political instability after the takeover of the presidential palace by Houthi militants prompted internationally recognized Yemen President Abd Rabbuh Mansur Hadi to tender his resignation. Hadi fled to the southern port city of Aden where he has re-established his presidency. Both sides, Iran and Saudi Arabia, have accused each other of worsening the situation.

In the latest development exemplifying the conflict, Iran has suspended pilgrimages to the Muslim holy places, Mecca and Medina in Saudi Arabia to protest the allegation that two Iranian boys were sexually assaulted by Saudi police last week in Jeddah airport.

The dispute is also visible in the statements of the two countries' politicians as both use denunciatory language. Both apparently consider each other the biggest rival at the current time. Syria, Iraq and Yemen are on the table as evidence of the rivalry, but one of the remarkable points is the natural reserve issue.
Last Update: Apr 14, 2015 10:26 am
RELATED TOPICS