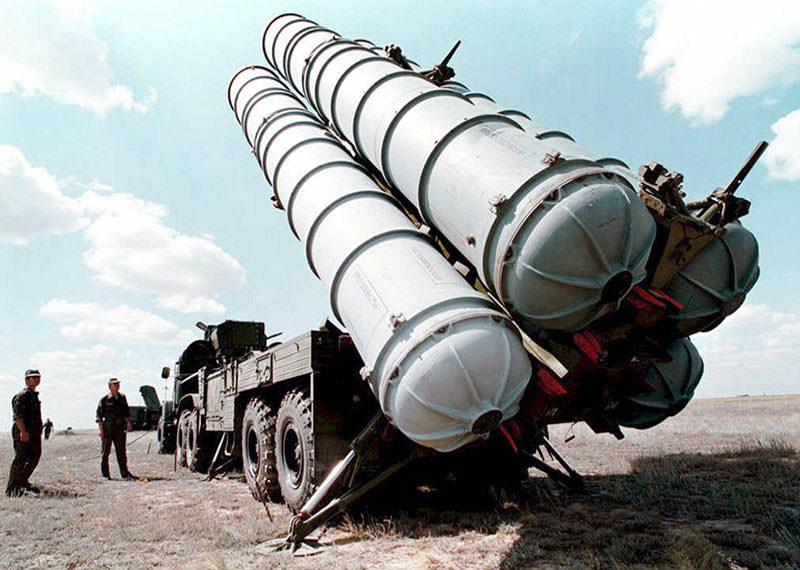 A picture taken in 1996 shows Russian S300 air-defense missiles being prepared to be launched at a military training ground in Russia | AFP Photo
by Daily Sabah with Wires Apr 13, 2015 12:00 am
Russian President Vladimir Putin has signed a decree lifting a ban on the delivery of S-300 anti-missile rocket systems to Iran, the Kremlin said on Monday, and started an oil-for-goods swap to increase economic ties between two countries.

Russia's decision was welcomed by Iran on Tuesday. Iran's Defense Minister Hossein Dehghan said Russia's latest move showed the political will of both countries to improve mutual relations in all fields.

Another senior Iranian official said Tuesday that Russia could deliver sophisticated missile systems to Tehran this year. "I think that they will be delivered this year," Ali Shamkhani, secretary of Iran's Supreme National Security Council, was quoted as saying by Russian news agencies ahead of a meeting in Moscow.

Russia's moves come after world powers, including Russia itself, reached an interim deal with Iran on curbing its nuclear program.

A senior Russian government official said that the country has started supplying grain, equipment and construction materials to Iran in exchange for crude oil under a barter deal.

Sources told Reuters more than a year ago that a deal worth up to $20 billion was being discussed with Tehran and would involve Russia buying up to 500,000 barrels of Iranian oil a day in exchange for Russian equipment and goods.

"[The presidential] decree lifts the ban on transit through Russian territory, including airlift, and the export from the Russian Federation to the Islamic Republic of Iran, and also the transfer to the Islamic Republic of Iran outside the territory of the Russian Federation, both by sea and by air, of air defense missile systems S-300," reportedly said Kremlin, according to RT, a Russian state-funded television network.

Russia's Defense Ministry will be ready to swiftly deliver the S-300 missile system to Iran if it gets the green light to do so; Interfax news agency quoted an official at the ministry as saying on Monday.

Russia says it cancelled a contract to deliver the advanced missile system to Iran in 2010 under pressure from the West following U.N. sanctions imposed on Iran over its nuclear program, but world powers and Tehran have now reached an interim deal on curbing Iran's nuclear work.

Officials from the two countries have issued contradictory statements since then on whether a barter deal has been signed, but Deputy Foreign Minister Sergei Ryabkov indicated one was already being implemented.

"I wanted to draw your attention to the rolling out of the oil-for-goods deal, which is on a very significant scale," Ryabkov told a briefing with members of the upper house of parliament on the talks with Iran.

"In exchange for Iranian crude oil supplies, we are delivering certain products. This is not banned or limited under the current sanctions regime."

He declined to give any further details. Russia's Agriculture Ministry declined comment and the Energy Ministry did not immediately respond to request for comment. There was no comment from Iran.

Russia hopes to reap economic and trade benefits if a final deal is concluded to build on the framework agreement reached in the Swiss city of Lausanne between Iran and six world powers - Russia, the United States, France, Britain, Germany and China.

The sides have until the end of June to work out a detailed technical agreement under which Iran would curb its nuclear program and allow international control in exchange for a lifting of economic sanctions. Tehran has denied that its nuclear activities are designed at developing atomic weapons.

Iran is the third largest buyer of Russian wheat, and Moscow and Tehran have been discussing the barter deal for more than a year.

Russia's state-controlled grain trader in September lowered the value of its potential grain supplies to Iran under the barter to $500 million annually. In December, Iran's oil minister denied Tehran and Moscow were close to a deal.

Ryabkov also suggested Russia had high hopes that its steady support for Iran would pay off in energy cooperation once international sanctions against the Islamic republic are lifted.

"It takes two to tango. We are ready to provide our services and I am sure they will be pretty advantageous compared to other countries," he said. "We never gave up on Iran in a difficult situation... Both for oil and gas, I think the prospects for our cooperation should not be underestimated."

He also reiterated Moscow's line that an arms embargo on Iran should be lifted once a final nuclear deal is sealed.

One upper house lawmaker asked Ryabkov whether lifting sanctions on Tehran could undermine Russia's position on global energy markets, including as the main gas supplier to Europe.

"I am not confident as yet that the Iranian side would be ready to carry out supplies of natural gas from its fields quickly and in large quantities to Europe. This requires infrastructure that is difficult to build," he said.