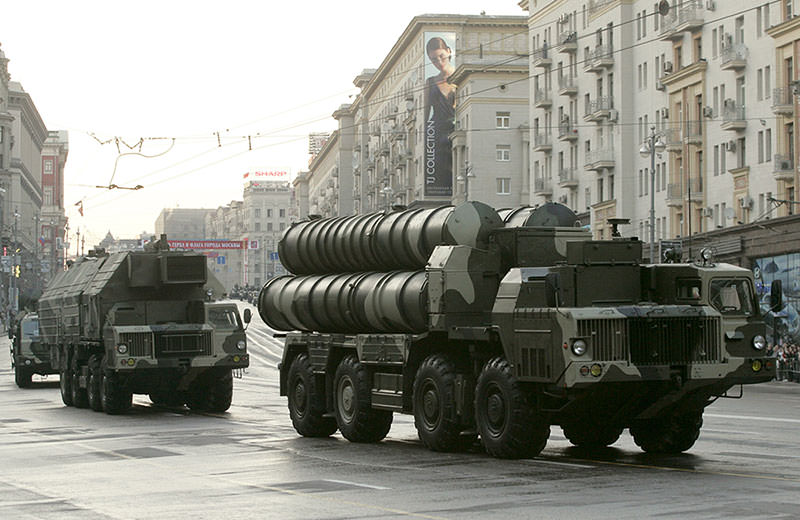 Russian S-300 anti-missile rocket system move along a central street during a rehearsal for a military parade in Moscow in this May 4, 2009 (Reuters Photo)
by Daily Sabah with AA Apr 15, 2015 12:00 am
Russian-made S-300 defense missile systems will arrive in Iran this year, Iran's defense minister has announced.

An agreement with Russia to deliver the S-300 - said to be one of the world's most efficient anti-aircraft systems - will be signed at a security conference in Moscow on Wednesday, Defense Minister Hossein Dehghan said on Iranian state television ahead of his visit.

"We will sign an agreement for the delivery of the S-300s during my visit in Moscow," said Dehghan, adding that Tehran would receive the missile systems within the year.

Dehghan said the agreement's main details had been discussed throughout the year with Russia, as the S-300 missile system issue was on the agenda at last year's security conference in Moscow.

He added: "The U.S. and Israel have been against Russia selling these systems to Iran since the beginning.

"It is important that President Putin decided to lift the ban."

"We don't believe it's constructive at this time for Russia to move forward with this," U.S. State Department spokeswoman Marie Harf said at a news conference on Tuesday, whereas The Pentagon said the U.S. would raise the matter through "the appropriate diplomatic channels".

"Our opposition to these sales is long and public," Pentagon spokesman Colonel Steve Warren told reporters.

The contract for Russia supplying S-300 defense missile systems to Iran was signed in 2007, but was unilaterally suspended in 2010 when the United Nations Security Council imposed an arms embargo on Iran.

Russian President Vladimir Putin signed a decree on Monday lifting the ban, according to the Kremlin press service.

The missile systems are designed to defend against air attacks.