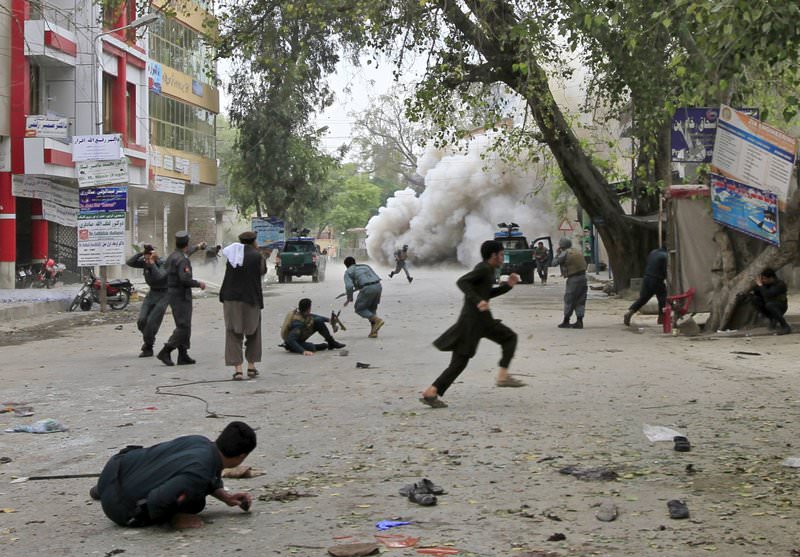 by Daily Sabah with DPA Apr 18, 2015 12:00 am
A suicide bomb blast in a crowded area of Afghanistan's eastern city of Jalalabad killed 33 people and injured more than 100 on Saturday, government and security officials said.

"The bomber blew himself up at a busy time in the center of the city where several government offices, a private bank branch and marketplaces are located," a spokesman for the provincial governor, Ahmad Zia Abdulzai, said.

"Most of the dead and injured are innocent civilians, but police might have also suffered casualties because the attack took place close to a checkpoint," Abdulzai said.

There were conflicting reports about whether the bomber was on foot or rode a motorbike.

Police spokesman Hazrat Hossein Mashreqiwal said a second bomb attached to a motorcycle exploded a few minutes after the suicide attack but did not cause casualties.

The death toll in the suicide blast could still rise, police warned.

Among the dead were two brothers who were the grooms in a double wedding last week, local media reported.

One hour after the Jalalabad attack, a magnetic bomb attached to a car exploded in Nangarhar's Behsood district, killing one civilian and injuring three, Abdulzai said.

In the north-eastern province of Ghazni, four civilians were beheaded by unknown assailants, local officials said.

The spokesman for the provincial governor, Nang Safi, said the victims, members of the Hazara Shiite minority, had been abducted a week ago.
Last Update: Apr 18, 2015 3:50 pm
RELATED TOPICS