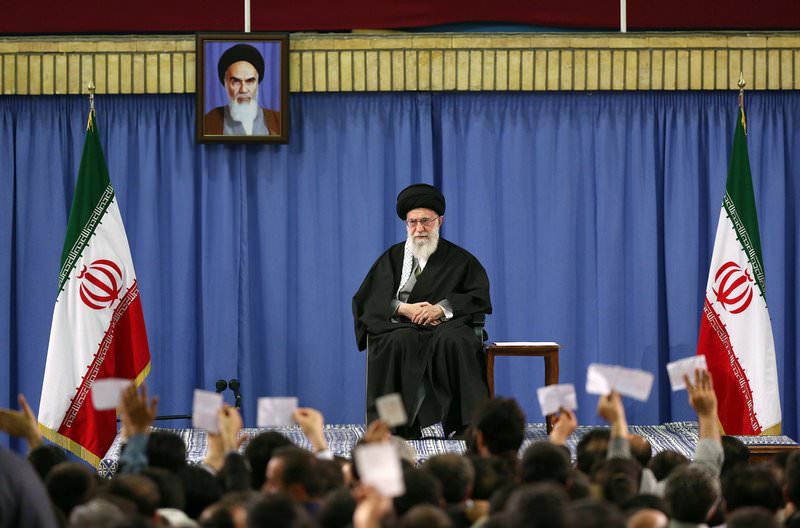 A handout picture released by the office of Iran's Supreme Leader Ayatollah Ali Khamenei on April 9, 2015 shows him attending a meeting with religious poets and panegyrist in Tehran (AFP Photo)
by Daily Sabah with AFP Apr 19, 2015 12:00 am
On Sunday, Iran's supreme leader Ayatollah Ali Khamenei urged his armed forces to increase their "defensive preparedness" over a US warning about military action against Tehran's nuclear sites if there is no nuclear deal.

In a speech to commanders and troops, the supreme leader said "the other side with insolence threatens us all the time", denying Iran was seeking an atomic bomb and insisting its military doctrine is defensive.

Khamenei's remarks came after General Martin Dempsey, chairman of the US Joint Chiefs of Staff, reiterated last week that should nuclear talks with Iran fail "the military option... is intact".

The United States has long said bombing Iran's nuclear sites and other key facilities may be necessary if Tehran does not rein in its atomic activities.

Khamenei did not call out Dempsey, but said: "After a period of silence by the other side, one of its officials has once again recently talked of the options on the table.

"On the one hand they bluff, and on the other hand they say the Islamic Republic of Iran should halt its defensive advancements, which is a foolish remark."

"Iran will never accept such foolish remarks and the nation has proved that if it is attacked, it will defend itself quite powerfully. It will stand united and like a strong fist against illogical aggressors."

Iran and six other world powers led by Washington agreed on April 2 on the key parameters of a nuclear agreement that could end the 12-year standoff over Tehran's atomic programme.

A comprehensive agreement is due by June 30, but Khamenei has stressed that concrete details, including how to lift sanctions, have not yet been decided.

"All bodies from the ministry of defense including the army and the Sepah (Revolutionary Guards) should increase their military and defensive preparedness. This should be regarded as an official directive," he said.

Khamenei also said Iran was not meddling nor a danger to the Middle East, instead taking aim at the United States, other Western powers and Israel for creating conflict.

"Americans as well as Europeans and some other sycophants have made up the myth of the nuclear issue and nuclear weapons to say the Islamic Republic is a threat.

"Today the biggest threats for the region and the world are America and the Zionist regime who ... interfere in any place they deem it necessary and launch massacres," he said.
Last Update: Apr 19, 2015 7:04 pm
RELATED TOPICS